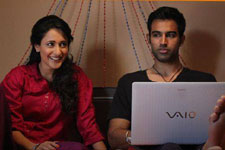 Nupur Barua / fullhyd.com
EDITOR RATING
6.0
Performances
Script
Music/Soundtrack
Visuals
6.0
6.0
5.0
6.0
Suggestions
Can watch again
Yes
Good for kids
No
Good for dates
Yes
Wait to rent it
No
Small-town stories are always interesting, and sometimes, too real. Good cinema does that - reminds you that life is complicated. Add plenty of humour to it, forced or otherwise, and you may just find yourself fully entertained by a movie that may not have any famous names attached to it, but is heartfelt and well-intentioned. Especially when it deals with some love, marriage, and dubious goings-on.

Titoo (Nishant Dahiya) is an ambitious young man, like most in this country. He aspires to be rich and famous, but the path to achieving that is never smooth. The first sign of trouble is the fact that he is neck-deep in debt, thanks to his various experiments to get rich quick.

That does not stop his family from carrying out its duties - he is married off to a feisty sportswoman named Gulshan (Pragya Jaiswal). It is a match made in heaven, or so they both think. Till things go haywire.

You see, Titoo is not exactly honest with his new bride about his financial status, or the repercussions of his debts. Struggling to maintain an impressive façade, he omits to tell her where he goes to when he disappears in the evenings. Unfortunately for him, another young man (Abhishek Kumar), in love with Gulshan, sees Titoo with another woman. Of course he tells Gulshan, and she wants a divorce.

As the couple go through the motions of separation, more and more facts come to light. Will they realise that this was one whole big misunderstanding, or will they insist on holding on to their prides and their secrets?

The narrative technique is quite interesting, in many ways. For one, it is not a foregone conclusion that there is a misunderstanding. Thus, the plot points keep you guessing and wondering. The sequence of events is laid out pretty neatly in the screenplay.

It may be argued that this is a commentary on society, and, maybe, a satire. However, the deliberate repetition of certain themes (such as condoms) and the inane jokes pull down the pace of the film as also its respectability. Nevertheless, the intentions of the makers come across as honest and sincere, and that may make you overlook some of the very obvious flaws. And for once, even though the movie deals with Punjabi culture, the theme is universal - a young ambitious man, and a young girl with dreams, and how the twain do not meet because of self-made complications.

Titoo MBA is a film that you would want to be indulgent with. It moves at a steady pace, and although sometimes you may get restless, the next sequence will make you forget you were. Like life, the movie has its good moments and bad, and is therefore worth a watch.

All three main actors are impressive, but Pragya Jaiswal is very confident, too. She steals the show with her dialogue delivery and her expressions. Nishant Dahiya complements her perfectly. The additional cast also seems to have had a great time working in this film.

The production and costume designs are reflective of the place that the movie is set in, and like most Hindi movies, this one too goes slightly OTT with the Punjabi-ness. Not that it hurts the eye. The camerawork is smooth, in most parts, and the editing is crisp and effective. The music is average, though a couple of songs are catchy enough to turn earworms for a while.

Watch Titoo MBA for a few smiles, and maybe fewer laughs. You may just enjoy yourself.
Share. Save. Connect.
Tweet
TITOO MBA SNAPSHOT 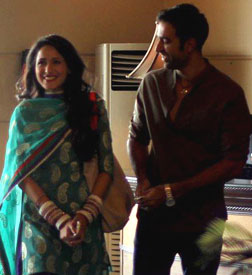 ADVERTISEMENT
This page was tagged for
titoo mba 2 kickass movie
titoo mba movie in hindi
Titoo MBA hindi movie
Titoo MBA reviews
release date
Follow @fullhyderabad
Follow fullhyd.com on
About Hyderabad
The Hyderabad Community
Improve fullhyd.com
More
Our Other Local Guides
Our other sites
© Copyright 1999-2009 LRR Technologies (Hyderabad), Pvt Ltd. All rights reserved. fullhyd, fullhyderabad, Welcome To The Neighbourhood are trademarks of LRR Technologies (Hyderabad) Pvt Ltd. The textual, graphic, audio and audiovisual material in this site is protected by copyright law. You may not copy, distribute, or use this material except as necessary for your personal, non-commercial use. Any trademarks are the properties of their respective owners. More on Hyderabad, India. Jobs in Hyderabad.