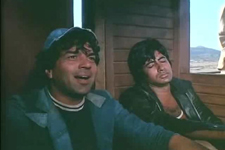 Swayamsrestha Kar / fullhyd.com
EDITOR RATING
9.0
Performances
Script
Music/Soundtrack
Visuals
8.0
6.0
9.0
8.0
Suggestions
Can watch again
Yes
Good for kids
No
Good for dates
Yes
Wait for OTT
No
Sholay has always been a bundle of paradoxes. It is an Indian Western, and the most famous one at that. It has two male leads crooning songs together and caressing each other with supreme adoration in what is the most celebrated and enduring instance of "homosocial" bonding in a nation which is as comfortable with anything homosexual as British people from the early 18th century. It shows a deadly dacoit being brought to his knees by an armless man in spite of the ever popular adage "kanoon ke haath bahut lambe hote hain" (see what we did there?)

In an age of cosy family dramas and neat endings, Sholay blazed across Indian screens with a garrulous nonchalance, emboldened by the irresistible rakish swagger which permeated the very air around the still-raw-at-the-edges Amitabh Bachchan, and, at the same time, softened somewhat with Dharmendra's roguish innocence and fickleness.

Sholay began slow and through sheer word-of-mouth service, achieved a cult status that is yet unsurpassed in the 100 years of Indian cinema. It was the Shakespeare moment in Hindi cinema, where the dialogues in a narrative trickled into the vernacular and became an inextricable part of the overall Indian linguistic culture.

It would really not be necessary to re-tell the premise of a film that has been promoted as "the greatest story ever told". Jai (Amitabh Bacchan) and Veeru (Dharmendra) are hired by Thakur Baldev Singh (Sanjeev Kumar), a former policeman, in order to capture the notorious dacoit Gabbar Singh (Amjad Khan), who has been terrorising the village of Ramgarh. Thakur has a personal vendetta against Gabbar, and he needs help in exacting his revenge.

On the way, Veeru falls for the feisty tonga driver Basanti (Hema Malini at her prettiest), and the world-weary and cynical Jai finds himself inexplicably fascinated with the Thakur's widowed daughter-in-law Radha (Jaya Bhaduri).

The mercenaries have numerous encounters with Gabbar, wherein they learn of his diabolical penchant for sadistic violence. Numerous chase scenes and gunfights ensue, and the Indian audience ends up being mesmerised every single time.

Make no mistake - the film was never terribly original, having borrowed rather generously from films like Kurosawa's "Seven Samurai", and renowned Westerns like "Once Upon A Time In The West" and "The Magnificent Seven". But while Kurosawa's film is unbearably bleak from the beginning, what with a relentlessly intense portrayal of the plight of an impoverished farming community in feudal Japan which is regularly ransacked by dacoits, Sholay was all about the sass and the style. Where Kurosawa concentrated more on the villagers and their desperate quest for mercenaries and samurais who could protect them, Ramesh Sippy, Sholay's director, concentrates more on the triad formed by Thakur-Jai & Veeru-Gabbar, thus establishing a dynamic debate involving social order, external usurpers and pseudo-anarchist enforcers. No wonder scholars still study the movie in their film studies courses.

The film heaves and hulks about with pulsating masculine energy. Even Basanti does not conform to popular feminine norms of demureness and grace. In fact, the chase scene where Basanti is being hounded by a handful of dacoits and she manoeuvres her horse cart with all the recklessness of a James Bond, all the while egging on her precious steed, Dhanno (perhaps the most popular horse in pop culture), with characteristic brusqueness is, according to us, one of the best chase scenes in the film. Give us Dharmendra and AB on a train, fighting muscled paunchy goons with their bare hands over "Shettyfied" flying cars any day. ANY. DAY.

As can be gleaned from the excessive gushing that has dominated the review so far, we do consider Sholay to be hallowed ground. "Thou shalt not fault Sholay" is this reviewer's one commandment when it comes to engaging with dedicated film dogmatists (like her film studies professor, who is an ardent World Cinema hawk and who has still not found anything majorly wrong with Sholay). But, yeah, now to the 3D part.

What were they thinking? Honestly, WHAT were they thinking? We could discern only three or four frames where the 3D was apparent. The film's cinemascope lensing was what made it memorable. Watching Sholay, in all its vintage 70 mm glory, was a celluloid ritual that does NOT need to be airbrushed into the tweetage. Supposedly, Rs. 25 crores were spent in re-touching the film - complete with the 3D, and the re-mastering of scenes.

Our question is - why? Have we become so obsessed with perfection that we need to stamp the signs of our "progress" on all the milestones that have led to this point? Are we incapable of enjoying anything spectacular until we have made sure that it has been "upgraded" and "updated" with the most cutting edge technology?

Or are we simply running out of ideas, so that in a fit of petulant creative impotence, we move on to find faults with the old ones? What do ya know, they'll be re-painting the Sistine Chapel next! We're sure Michaelangelo got some noses wrong the first time around.
Share. Save. Connect.
Tweet
SHOLAY (3D) SNAPSHOT 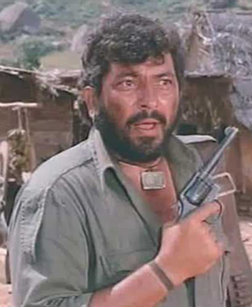 See Sholay (3D) full details
SHOLAY (3D) USER REVIEWS
1 - 2 OF 2 COMMENTS
POSITIVE  |  NEGATIVE |  NEWEST  |  OLDEST  |  MOST HELPFUL  |  LEAST HELPFUL
manisha kailesh on 7th Jan 2014, 5:36pm | Permalink
Nice
S on 4th Jan 2014, 8:15am | Permalink
One would be remiss to think that 3-D'ing any movie, old or new, is a creative choice (except in rare occasions like Gravity, where it truly adds depth). It is all about business, it is about making that extra dollar or rupee on the glasses. As simple as that. The producers are not fools to invest 25cr in converting the movie if they don't think they can bring in twice that amount (conservatively speaking) with the reissue. And this the only way that Sholay could be brought back to the bring screen and have people pay for it to see it - they couldn't re-colorize it, like Mughal-E-Azam or remix the soundtrack. So 3D was purely a business decision.
LEAVE A COMMENT
fullhyd.com has 700,000+ monthly visits. Tell Hyderabad what you feel about Sholay (3D)!
MORE MOVIES
Latest Reviews
Bimbisara
DC League Of Super-Pets
Bullet Train
Ramarao On Duty
The Legend
more
Shamshera
Thank You (Telugu)
Gargi
My Dear Bootham
Shabaash Mithu
HIT: The First Case
The Warriorr
Happy Birthday (Telugu)
Kaduva
Thor: Love and Thunder
Contemporary Reviews
Mr. Joe B Carvalho
The Wolf Of Wall Street
The Secret Life Of Walter Mi...
47 Ronin (3D)
47 Ronin
more
47 Ronin (Hindi)
47 Ronin (Telugu)
Biscuit
Kshatriya
Gullu Dada 4
Walking With Dinosaurs (3D)
Mahabharat
Uyyala Jampala
D For Dopidi
Random Reviews
Hard Target
Predator
Indian
Torque
Chirutha
more
Khatron Ke Khiladi
Kaante
Kidnap
Katha
Erra Gulabeelu
Dumb And Dumber To
Deadpool (2016)
A Gentleman
Captain Marvel (Telugu)
Uncharted
SEARCH MOVIES
Dissatisfied with the results? Report a problem or error, or add a listing.
ADVERTISEMENT
SHOUTBOX!
{{todo.name}}
{{todo.date}}
[
ip{{todo.ip}}
]
{{ todo.summary }}... expand »
{{ todo.text }} « collapse
First  |  Prev  |   1   2  3  {{current_page-1}}  {{current_page}}  {{current_page+1}}  {{last_page-2}}  {{last_page-1}}  {{last_page}}   |  Next  |  Last
{{todos[0].name}}

ADVERTISEMENT
This page was tagged for
Sholay (3D) hindi movie
Sholay (3D) reviews
release date
Dharmendra, Amitabh Bachchan
theatres list
Follow @fullhyderabad
Follow fullhyd.com on
About Hyderabad
The Hyderabad Community
Improve fullhyd.com
More
Our Other Local Guides
Our other sites
© Copyright 1999-2009 LRR Technologies (Hyderabad), Pvt Ltd. All rights reserved. fullhyd, fullhyderabad, Welcome To The Neighbourhood are trademarks of LRR Technologies (Hyderabad) Pvt Ltd. The textual, graphic, audio and audiovisual material in this site is protected by copyright law. You may not copy, distribute, or use this material except as necessary for your personal, non-commercial use. Any trademarks are the properties of their respective owners. More on Hyderabad, India. Jobs in Hyderabad.