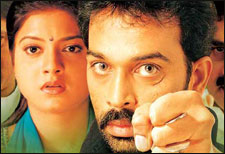 Mithun Verma / fullhyd.com
EDITOR RATING
5.0
Performances
Script
Music/Soundtrack
Visuals
NA
NA
NA
NA
Suggestions
Can watch again
NA
Good for kids
NA
Good for dates
NA
Wait to rent it
NA
Are you inspired by eternal love stories that elevate normal people to the level of supreme beings? Do you want to work for your goals through procedures that will gratify the conscientious soul inside you? Is it necessary that you slog day in day out for something that you absolutely love and wouldn't live without? Then why the hell are you wasting your time reading about Kaasi, because Kaasi (nor this write-up) will do absolutely nothing to help you achieve anything.

Kaasi (JD, after a long lay-off) has achieved a lot in his life with his ability to bash-up goons. One look at Kaasi, and the next minute the goons are a muddled heap on the floor. They even roll on the floor laughing looking at his new contact lenses. Kaasi stylishly kicks and punches them for treating his state-of-the-art Zee-horror-show brand new lenses, cheaply.

That's because Kaasi is a real time hardcore guy who has come-up in life selling black tickets. Unlike Amir Khan in Rangeela (a movie by Ram Gopal Varma, who is the mentor of JD Chakravarthy, who plays Kaasi. Yup, I'm that jobless to find a connection. And yup, you're that jobless to be reading it.), Kaasi is not a very nice person. He would do anything for money.

This we find out when he mercilessly hands-over an eloping girl and her boyfriend to their parents, for money. That girl happens to be Anjali's (Keerti Chawala) sister. Kaasi tries to defend himself by saying that couples who look and act like that are dangerous for the society, so he returned them back to where they will not be thrown stones at for having no acting abilities.

Then Anjali asks him how come people are not throwing stones at her? Perhaps because she was in Aadi or something. How the hell should he know all that? All he knows is that he's going to teach her a lesson. A lesson in acting also, but first, a lesson not to mess with Kaasi.

In order to prove his love for Anjali, Kaasi fabricates an eloping shtick, which goes completely awry and he ends up in Calcutta with Anjali. There, he tries to abandon her and he almost succeeds, too. But for the incident that completely transforms him.

In one of the body shops in Calcutta, he finds this innocent girl from Andhra (whom he and Anjali had earlier met) who narrates how her boyfriend had duped her and sold her out to this hellhole. That completely awakens the nice person inside Kaasi. He returns back to Anjali and falls in love with her. Anjali is ecstatic that people can fall in love with her without giving them money, also. So what if she cannot act and all?

As seen in posters and promos, just why does JD shave his head off and why does he live life like a saint? You'll have to see or guess for yourself. Clue: He does that for the heroine. Cryptic clue: No, he is not praying he does not get a chance to act with her again. Act for her again, we mean.

The movie sustains only because of JD's performance - he's done a great job - both as the volatile Kaasi and as the saintly Kaasi. Sri has also made a decent comeback as the music director. The story is also somewhat novel, but somewhat similar to movies like Sethu (Seshu, Tere Naam). And there are too many stereotypical instances that rot the movie. It has its moments, but on the whole is not very fresh.
Share. Save. Connect.
Tweet
KAASI SNAPSHOT

ADVERTISEMENT
This page was tagged for
Kaasi telugu movie
Kaasi reviews
release date
JD Chakravarthi, Keerthi Chawla
theatres list
Follow @fullhyderabad
Follow fullhyd.com on
About Hyderabad
The Hyderabad Community
Improve fullhyd.com
More
Our Other Local Guides
Our other sites
© Copyright 1999-2009 LRR Technologies (Hyderabad), Pvt Ltd. All rights reserved. fullhyd, fullhyderabad, Welcome To The Neighbourhood are trademarks of LRR Technologies (Hyderabad) Pvt Ltd. The textual, graphic, audio and audiovisual material in this site is protected by copyright law. You may not copy, distribute, or use this material except as necessary for your personal, non-commercial use. Any trademarks are the properties of their respective owners. More on Hyderabad, India. Jobs in Hyderabad.