If you've ever tackled a Teja movie before, you have already got your lesson in frustration. With Nijam all of this will change. Nijam makes us to take back all the spiteful, sleazy stuff we've said against the guy. Just so that we can say some more revitalised and re-brutalised nasty stuff!

Like all things, or most things, or at least some things, though none come to mind right now, Nijam isn't what is appears to be. But it's not a lie that it has been stolen from a movie that nobody has forgotten. Thanks to reruns on Telugu channels, we all still remember frame by frame, Bharatheeyudu where Kamal Hassan shocked us with the unbelievable make-up. This one is exactly that, where the protagonist goes on murdering government officials that chomp through bribes for doing their own jobs. Except, of course, that this neither has the class of Kamal Hassan nor the finesse of Shankar nor the genius of A R Rahman nor an obese Manisha Koirala... but wait, that's taken care of by Raasi! 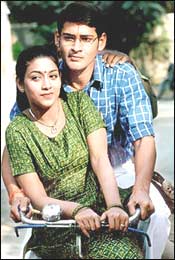 Rama (Mahesh Babu) is this 'chikna, meetha potta' who thinks that Janaki (Rakshita) is a bit small for his age to be flirting with. Grossly offended by this, Janaki decides to do the same to the audience - stuffing paper balls into her top, trying to be 'big' (believe me sister, Raasi is kidding whenever she uses the word 'Natural'). There, this is the kinda humor, in fact the only humor, the movie offers. This from a guy whose stronghold is supposedly comedy. And you know that this is going to be one very long projection show.

Rama's dad is a superhero clichéd fire fighter who's been on the hate list of the bad man Devudu (that villain guy from Jayam) since quite sometime - precisely, from almost the beginning of the flick! So in an attempt to kill the fire fighter, a gang member dies, and the superhero dad is apprehended. He's then murdered by Devudu who takes the help of the corrupt policemen. And you know it's time for our hero to pour some red colour onto his clothes.

In Bharatheeyudu we had the old man's wife helping him - in this one we have Rama's mom doing the same. The gushy encounters with the despicable government officials were better shown in Bharatheeyudu. And even better on Tehelka.com! The killing of the officials, though cranky, was at least innovative in the former - in this one, the violence is the usual 3 Gs: gory, grotesque and gobbledygook. Bharatheeyudu even had a great ending, but Nijam just loses momentum like a spinning top. 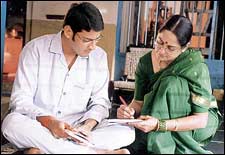 The performances are good, especially by the mother character. Mahesh? Well, we've seen him better before and will see him better after. Raasi has been boasting about how this movie will start a new chapter in her career. Yup, the chapter on pointless guest appearances. That can be said about Prakash Raj too, who plays the character of the person tracing the killer. He has no impact whatsoever on the film except in the credits.

If Teja has any appreciation for some Nijam, he should say: "The movie has the title, 'Nijam, it's a lie' because it's a lie to call it an original. Apart from the movie, even the name has been somewhat morphed, translated and tampered from another one (True Lies). So I hope you'll enjoy watching Nijam as much as I'll enjoy taking your money. Let's not forget, that's what moviemaking is all about, and that is the only Nijam!" 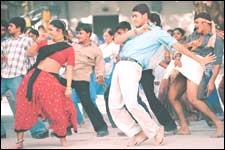 Being a movie star is the best job in the world. Say a few lines in front of the camera, they pay you a bunch of money and then you drive off in your Merc-convertible to your expensive mansion in Banjara Hills where your model ex-wife is waiting for you naked! Sure... until the movie comes out and you have to pack your bags and schlep all over the country for the next three months promoting the damn thing! And in cases like this, the next three years, considering what happened with Jayam. To conclude, if you don't see Nijam, you will not know what you should be missing!
Share. Save. Connect.
Tweet
NIJAM SNAPSHOT
See Nijam full details
NIJAM USER REVIEWS
1 - 9 OF 9 COMMENTS
POSITIVE  |  NEGATIVE |  NEWEST  |  OLDEST  |  MOST HELPFUL  |  LEAST HELPFUL
USER RATING
8.8
193 USERS
Performances
Script
Music/Soundtrack
Visuals
1.0
1.0
1.0
1.0
Can watch again - No
Good for kids - No
Good for dates - No
Wait to rent it - No
Bat GOL on 15th Apr 2005, 9:34am | Permalink
very good
RATING
10
Meenu Raj on 15th Apr 2005, 9:33am | Permalink
very nice
RATING
10
Aditya Rao on 7th Apr 2005, 6:03am | Permalink
Walking into this was a mistake.
RATING
4
Gm Naidu on 1st Jun 2003, 12:39pm | Permalink
excellent.i haven`t expected.
RATING
10
Gopi on 28th May 2003, 4:44pm | Permalink
If you think you are too lucky, then watch this movie. You will never say you are lucky!!!
RATING
2
Rajesh on 27th May 2003, 8:58am | Permalink
It's the worst movie I have ever seen. Nijam!(It's not a lie)
RATING
2
Gopi on 26th May 2003, 1:07pm | Permalink
Another sick film by Teja. Hope luck will elude ahim at least this time.
RATING
2
Surajee Vupparapalli on 26th May 2003, 12:00pm | Permalink
Such a useless boring movie! The vulgar comedy of the heroine with her b's is simply inexcusable. What the hell does Teja think about people watching the movie? And the male voice singing the songs cannot corrupt the Telugu lyrics more - it's like revving stones in a dubba. Jesus, I will boycott this damned movie and all others by this director/musician. I am afraid there's a hidden agenda in making this movie - to defame Mahesh after Okkadu's hilarious success; this is not an unknown practice in the industry.
RATING
2
A B on 25th May 2003, 12:03am | Permalink
Lousy movies like these can only come out of the Telugu industry.
RATING
2
LEAVE A COMMENT
fullhyd.com has 700,000+ monthly visits. Tell Hyderabad what you feel about Nijam!
MORE MOVIES
Latest Reviews
Kadhanika
Shukra
Deyyam - 2021
Tempt Raja
Vakeel Saab
more
Wild Dog
Sulthan (Telugu)
Sulthan
Rang De (Telugu)
Saina
Aranya
Sashi
Chaavu Kaburu Challaga
Mosagallu
Gaali Sampath
Contemporary Reviews
Chenna Kesava Reddy
Idiot
X-Men 3 (Telugu)
Raja Babu
Mera Dil Leke Dekkho
more
Vaalliddari Vayasu Padahaare
Murari
Guest House
Mission Impossible 3
Maa Tujhe Salaam
Chup Chup Ke
Kitha Kithalu
Something Special
Poseidon
Random Reviews
Pandavas
Eight Legged Freaks (Telugu)
Kranti
Action No 1
Arya
more
Babylon A. D. (Hindi)
Julie & Julia
The King's Speech
War Horse
Mere Dad Ki Maruti
12 Years A Slave
Mana Kurralle
Fan
The Foreigner (Hindi)
Avengers: Endgame (Telugu)
SEARCH MOVIES
Dissatisfied with the results? Report a problem or error, or add a listing.
ADVERTISEMENT
SHOUTBOX!
{{todo.name}}
{{todo.date}}
[
ip{{todo.ip}}
]
{{ todo.summary }}... expand »
{{ todo.text }} « collapse
First  |  Prev  |   1   2  3  {{current_page-1}}  {{current_page}}  {{current_page+1}}  {{last_page-2}}  {{last_page-1}}  {{last_page}}   |  Next  |  Last
{{todos[0].name}}

ADVERTISEMENT
This page was tagged for
nijam movie hd
Nijam telugu movie
telugu movie nijam cast changes
nijam telugu movie
nijam telugu full movie
Follow @fullhyderabad
Follow fullhyd.com on
About Hyderabad
The Hyderabad Community
Improve fullhyd.com
More
Our Other Local Guides
Our other sites
© Copyright 1999-2009 LRR Technologies (Hyderabad), Pvt Ltd. All rights reserved. fullhyd, fullhyderabad, Welcome To The Neighbourhood are trademarks of LRR Technologies (Hyderabad) Pvt Ltd. The textual, graphic, audio and audiovisual material in this site is protected by copyright law. You may not copy, distribute, or use this material except as necessary for your personal, non-commercial use. Any trademarks are the properties of their respective owners. More on Hyderabad, India. Jobs in Hyderabad.