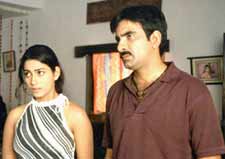 Nowhere are the triumphs of men's machismo more evident than on the silver screen. Right from the pan-munching, intrepid State Rowdy to the cotton-clad, butchery Narasimha Naidu, stars are dogged on braving new baddies and breaking new grounds. At the moment, the latest break-through is a non-butchery (fortunately), macho 'n' hep (definitely by Tollywood standards) hero whose hobby is to yap - and preferably snap - at a baddie-turned-police-commissioner. Presenting Chantigadu, a k a Idiot (Ravi Teja). 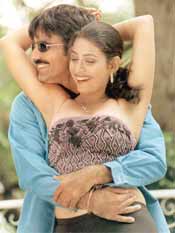 Sye... Sara Sara Sye... comes in Idiot Chanti, togged up in jimjams, gleefully boogying all over the screen. And within the twinkling of an eye, all that glee turns gloom, as the local college goons kick the red-stuffing (that's blood, you twinkie!) out of him. It's Suchitra (Rakshita), daughter of the Commissioner of Police (Prakash Raj), to the rescue, and she gets him admitted to a hospital.

Subsequently she learns from the doctor that Chanti is in dire need of B+ blood. Oi Oi Savaloy! She belongs to the same blood group, and Chanti is given the kiss of life! The rationale? Answers to the usual address please, and the best one wins an official fullhyd.com cap. 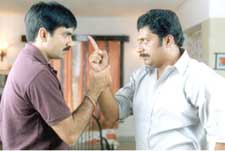 As fate would have it, and according to the what-if-heroine-gives-the-kiss-of-life-to-hero section of the Tollywood manual, Chanti falls for Suchitra. The next time on whenever they meet, Chanti, in his vicky-verky Telangana accent, expresses his love saying IDIOT (I Do Ishq Only Tumse).

Suchitra accepts his proposal - but only after he succeeds in the quintessential will-you-die-for-me test. Then follows an entwined lace of smackeroos from Suchitra and smasheroos from the commissioner, her hopping-mad father. What remains to see is how Chanti wins his ladylove and, to conclude with, how he manages to become an IPS officer! 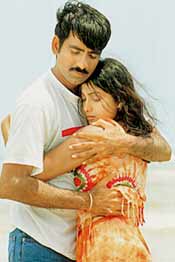 Now are you wondering why Idiot at all and why not Chantigadu? Here's why...

1. Nobody would sing "nee kallu peliponu" to his fiancée as a duet
2. No one in his right mind would slap his fiancée for willing to die for their love
3. Not a soul with whichever mind would dare to overtly call a police commissioner Osama Bin Laden!

Ravi Teja clearly emerges as the top dog for the movie (good thing or bad thing... you decide), for being able to perform as it should be - a character with machismo. The performances of Rakshita and Prakash Raj as Suchitra and the Commissioner respectively are apt, too. A special note of appreciation should go for music director Chakri for the excellent music. The lyrics have traces of raunchiness and clumsiness, though. This is must be yet another novel feather added to Poori Jagannath's directorial hat. 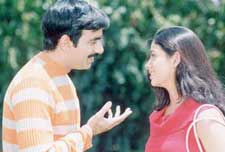 Idiot, with a weird sense of humor, will be likeable to a great extent if you can keep aside your reservations about the lead characters and some small holes in the plot. Besides, Chakri's first-rate music's hit the big time, materializing into a solid recommendation to watch the film. But Idiot definitely isn't your cup of tea if you are expecting cent percent classic comedy, because the humor has a touch of raucousness.
Share. Save. Connect.
Tweet
IDIOT SNAPSHOT
See Idiot full details
IDIOT USER REVIEWS
1 - 5 OF 5 COMMENTS
POSITIVE  |  NEGATIVE |  NEWEST  |  OLDEST  |  MOST HELPFUL  |  LEAST HELPFUL
USER RATING
7.5
69 USERS
Performances
Script
Music/Soundtrack
Visuals
NA
NA
NA
NA
Can watch again - NA
Good for kids - NA
Good for dates - NA
Wait to rent it - NA
Mungalla Krishna on 10th Nov 2002, 6:37pm | Permalink
I have not seen the film yet. But I can say one thing about this film, and that is that ever since Ravi Teja worked with Chiru in Annayya as his brother, his luck has changed. And I expect that one day he will prove his talent and will become as successful a star as Chiranjeevi. My suggestion to you Ravi Teja is that you should not forget your annayya Chiranjeevi and should always get his blessings. I hope one day you will also turn out as Chiru in the Telugu industry. Raviteja I saw clippings of your film in Gemini T.V. Your performance is very well in Idiot. Best of luck for your next coming films, and I wish you a bright future. Bye Bye..
RATING
10
Srinivas Kolan on 8th Oct 2002, 7:24pm | Permalink
This is one of the best movies in the recent times. Another poori jagannath's marvel. The director has maintained a good grip over the movie till the end. The casual chanti character with added humour is the highlight.
RATING
10
Cynic on 29th Sep 2002, 9:46pm | Permalink
The "accent" that chanti gaadu has put up in the movie is termed as 'yaasa' in telugu. It's andhra & not telangaana, if at all it can b classified under such a head.
RATING
2
Srinivas M on 29th Aug 2002, 11:59am | Permalink
this move exclent move directed by jagan
RATING
10
Sj Jaish on 25th Aug 2002, 1:07pm | Permalink
Songs are pretty average. Same old story served in new bottle. Background score sucked big time.
RATING
2
LEAVE A COMMENT
fullhyd.com has 700,000+ monthly visits. Tell Hyderabad what you feel about Idiot!
MORE MOVIES
Latest Reviews
SR Kalyana Mandapam
Ippudu Kaaka Inkeppudu
Thimmarusu
Kadhanika
Shukra
more
Deyyam - 2021
Tempt Raja
Vakeel Saab
Wild Dog
Sulthan (Telugu)
Sulthan
Rang De (Telugu)
Saina
Aranya
Chaavu Kaburu Challaga
Contemporary Reviews
X-Men 3 (Telugu)
Raja Babu
Mera Dil Leke Dekkho
Vaalliddari Vayasu Padahaare
Murari
more
Ghajini
Bichhoo
Chenna Kesava Reddy
Nijam
Guest House
Mission Impossible 3
Maa Tujhe Salaam
Chup Chup Ke
Kitha Kithalu
Random Reviews
16 December
Dum Dum Dum
Dukaan
Brother Bear
Rendu
more
Karz
Paranormal Activity
Upendra
Nippu
Back Bench Student
Malligadu Marriage Bureau
The Woman In Black 2: Angel ...
Laal Rang
Adirindi
Geetha Chalo
SEARCH MOVIES
Dissatisfied with the results? Report a problem or error, or add a listing.
ADVERTISEMENT
SHOUTBOX!
{{todo.name}}
{{todo.date}}
[
ip{{todo.ip}}
]
{{ todo.summary }}... expand »
{{ todo.text }} « collapse
First  |  Prev  |   1   2  3  {{current_page-1}}  {{current_page}}  {{current_page+1}}  {{last_page-2}}  {{last_page-1}}  {{last_page}}   |  Next  |  Last
{{todos[0].name}}

ADVERTISEMENT
This page was tagged for
2 idiots movie review
2 idiots telugu
2 idiots telugu review
2 idiots telugu full movie review
idiot movie songs telugu
Follow @fullhyderabad
Follow fullhyd.com on
About Hyderabad
The Hyderabad Community
Improve fullhyd.com
More
Our Other Local Guides
Our other sites
© Copyright 1999-2009 LRR Technologies (Hyderabad), Pvt Ltd. All rights reserved. fullhyd, fullhyderabad, Welcome To The Neighbourhood are trademarks of LRR Technologies (Hyderabad) Pvt Ltd. The textual, graphic, audio and audiovisual material in this site is protected by copyright law. You may not copy, distribute, or use this material except as necessary for your personal, non-commercial use. Any trademarks are the properties of their respective owners. More on Hyderabad, India. Jobs in Hyderabad.