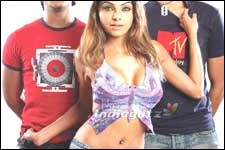 EDITOR RATING
1.0
Performances
Script
Music/Soundtrack
Visuals
NA
NA
NA
NA
Suggestions
Can watch again
NA
Good for kids
NA
Good for dates
NA
Wait for OTT
NA
Something Special is a gentle and soulful college romance that somehow loses direction in between to become a porn film. Well, at least half of that is true. They show you as much skin as is legally possible without violating the Geneva Convention (or whatever law it is that the Censor Board uses to monitor films). There are plenty of sequences that will soon be shown on Midnight Masala, and some that won’t be shown even there.

Madhav and Pavan (Samrat and Rajendra) are two friends and students who are beset by the same problem plaguing tens of thousands of college students everywhere – the kind of actors who play college students in Telugu films. The first half of Something Special will need you to survive extreme pantomiming and over-acting by a bunch of mis-actors who get to mouth dialogues even worse than they can deliver them.

Okay, Madhav and Samrat’s real problem is that they cannot get girlfriends, and thanks to some really bottom-of-the-barrel script-writing, they land Anju and Mahi (Aswini and Sunaina). The film now has 3 discrete chunks:

1. The guys con the girls into having sex with them, and when the girls find out they were conned, they are livid. But the girls then find out how this was the handiwork of some rivals of the guys, and all is forgiven. Don’t even ask. [3 reels of film here]

2. The guys’ fathers (Tanikella and L B Sriram) refuse to let the guys marry the girls since the dowry isn’t enough, and the guys walk out of their homes and spend some days without food or water. [2 reels]

3. The guys’ fathers discover a brand new girl Mona (Mona Chopra) who is worth Rs. 100 crores in property, and ask the guys to compete to court and marry her, and the guys eagerly agree. The girls are forgotten, and the guys vie for Mona’s affections for the rest of the film, and finally decide that they will both marry her. [5 reels]

The chunks are independent, are connected through contrived efforts of the writers, and are written to fill up space since the basic script is too brief to last 135 minutes. Yes, the scripting of this film shows more creative bankruptcy that you’ve seen in a while. The 3rd chunk is also full of vulgar jokes and activity on screen. The makers should have asked themselves which the last film was that used cheap jokes and skin show as its primary offerings and became a hit.

The film is an all-round disaster – perfomances, dialogues, plot, music, just everything. Mona Chopra, however, is gorgeous – an Aishwarya Rai look-alike, she makes you wonder what she’s doing in a film like this and in a role like that, kissing non-descript actors one after the other. The actors are just cheap labor, and the songs are recycled in the same movie as a cost-cutting exercise.

We can think of worse things to do than watching this movie, but we can’t think of anyone who would do them.

ADVERTISEMENT
This page was tagged for
something special telugu movie plot
Something Special telugu movie
Something Special reviews
release date
Samrat, Aswini
Follow @fullhyderabad
Follow fullhyd.com on
About Hyderabad
The Hyderabad Community
Improve fullhyd.com
More
Our Other Local Guides
Our other sites
© Copyright 1999-2009 LRR Technologies (Hyderabad), Pvt Ltd. All rights reserved. fullhyd, fullhyderabad, Welcome To The Neighbourhood are trademarks of LRR Technologies (Hyderabad) Pvt Ltd. The textual, graphic, audio and audiovisual material in this site is protected by copyright law. You may not copy, distribute, or use this material except as necessary for your personal, non-commercial use. Any trademarks are the properties of their respective owners. More on Hyderabad, India. Jobs in Hyderabad.