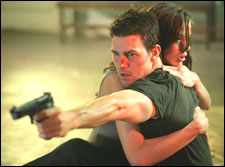 Kavita Krishnamoorthy / fullhyd.com
EDITOR RATING
7.0
Performances
Script
Music/Soundtrack
Visuals
NA
NA
NA
NA
Suggestions
Can watch again
NA
Good for kids
NA
Good for dates
NA
Wait to rent it
NA
What is it about Tom Cruise that we love so much? That he can jump off 2,000-foot high buildings with just a rope saving him from a plunge to his death? Or that he can jump across a 20-foot gaping hole in a bombed bridge? Or that he can jump onto Oprah's Couch declaring his undying love for a current sweetheart?

Or maybe it's just that we're all dying for some entertainment (read kick-ass action) during our weekends, and MI:3 happens to be the hottest action movie in town this week.

An IMF agent kidnapped, an incomprehensible weapon that needs to be delivered, a helicopter chase through windmills, hot sleek cars and bridges blowing up - MI:3 has all the ingredients and features of a typical MI movie - action, adrenaline, suspense and chases. What it lacks is the stuff that would've set it apart from any other action movie - intelligent dialogues and character development.

Having said this, however, the movie does present a better plot than MI:2 (keep in mind that MI:2 was NOT applauded for its great storyline). Director J J Abrams has done an impressive job with some adrenaline-pumping scenes that keep you at the edge of your seat. With a breathtaking sequence involving a fulcrum and an awe-inspiring helicopter chase, the movie is a perfect blend of action, anxiety, fear and anger.

As with MI and MI:2, MI:3 is essentially a chor-police story, with Ethan Hunt (Tom Cruise), Luther Stickell (Ving Rhames), Declan Gormley (Jonathan Rhys Meyers) and Zhen Lei (Maggie Q) heading the IMF team out to get the villain Owen Davian (Philip Seymour Hoffman), who's an international weapons and information provider with no remorse and no conscience.

The masks are back (and thankfully, not overdone as in MI:2), and there's a new weapon in town - a tiny explosive device that detonates in your head a couple of minutes after it zips up your nose. But before we get into the intense gadgetry involved in the movie, let's lay out the plot.

Ethan Hunt has retired from the IMF, and is engaged to a nurse Julia Meade (Michelle Monaghan), who thinks her fiancé works a desk job at the Department of Transportation. But when his protégé Lindsey Farris (Keri Russell) is captured by the ruthless Owen Davian, he decides to break out of his retirement and rescue her.

One thing leads to another, and Julia ends up hostage, and the only way Ethan can save her is to deliver to Owen, the Rabbit's Foot. Now what exactly the 'Rabbit's Foot' is, is anyone's guess. But in the course of the movie, you tend not to really care, either.

The chase leads Ethan over 4 grand-scale set pieces - Germany, The Vatican, Shanghai and US - and each of these is masterfully executed with a breezy slickness that is hep and breathtaking. All through these chases, you (as also Ethan) are made to believe that there is a mole in the IMF, and the moral ambiguities of his bosses Theodore Brassel (Laurence Fishburne) and John Musgrave (Billy Crudup) that he has to encounter is what hold the film together.

This movie is non-stop action from beginning to end, occasionally infused with schmaltzy Hollywood love scenes cruising (pardon the pun!) as "romance". Tom Cruise reprises his role with the forté and flair that he is known for. However, the supposed intimacy with Michelle Monaghan comes across as a bland romance rather than a passionate communion.

Philip Seymour Hoffman has outdone himself in a deeply layered performance of a barbarous villain, and is no doubt the best bad guy to hit the screens this summer. His scenes with Cruise literally quiver in tension and quiet revulsion.

Laurence Fishburne and Billy Crudup play Cruise's bosses, and provide the dubious angle to the plot. With their concentrated and focused facial expressions, they enact their roles quite convincingly as well.

Jet fighters bombing bridges, shoot-outs that make your palms sweat with anxiety and cool Cruise battling his way through it all… after having sat through the ludicrousness of MI:2, MI:3 paves the path for a tantalizing hit which will keep you captivated till the very end.
Share. Save. Connect.
Tweet
MISSION IMPOSSIBLE 3 SNAPSHOT

ADVERTISEMENT
This page was tagged for
Mission Impossible 3 english movie
Mission Impossible 3 reviews
release date
Tom Cruise, Philip Seymour Hoffman
theatres list
Follow @fullhyderabad
Follow fullhyd.com on
About Hyderabad
The Hyderabad Community
Improve fullhyd.com
More
Our Other Local Guides
Our other sites
© Copyright 1999-2009 LRR Technologies (Hyderabad), Pvt Ltd. All rights reserved. fullhyd, fullhyderabad, Welcome To The Neighbourhood are trademarks of LRR Technologies (Hyderabad) Pvt Ltd. The textual, graphic, audio and audiovisual material in this site is protected by copyright law. You may not copy, distribute, or use this material except as necessary for your personal, non-commercial use. Any trademarks are the properties of their respective owners. More on Hyderabad, India. Jobs in Hyderabad.