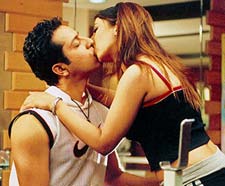 EDITOR RATING
3.0
Performances
Script
Music/Soundtrack
Visuals
NA
NA
NA
NA
Suggestions
Can watch again
NA
Good for kids
NA
Good for dates
NA
Wait to rent it
NA
It's rare that you see an remake of a Hollywood film by Bollywood that stays faithful to its original in both presentation and spirit. Fun is a remake of Busty Babes In Steamy Nakedsville 3, made in 1993 by 20th Century Sex Studios and rated PG 45, and it achieves its objective of, well, we'll get to that later.

Natasha (Payal Rohatgi) is a woman who would make you just want to press the Instant Undress button, given both you and she are fairly clear about what you came here for. A party-lover, she talks her friends Falguni and Urmi into believing that the future of the world is in husband-swapping, and convinces them to marry so that they can swap husbands. Okay, so they're already married, but did you come to this movie to verify that, you nigolofus? Let's face it, there are only two objectives in the world that are worth pursuing, and they're both on a woman's body. Hell yeah.

Anyway, it's tough to conclude from what happens at the vacation that the women are striving for world peace. Or even that they were striving for their fair share of the world's clothing supplies. Plus, when you arrive in this world you are without clothes and when you leave you go without clothes, so what's the point of this meaningless charade in between?

So the women stay fairly austere in their draping requirements, and go about their objecti… er, their missions in pressing urgency. Now few men can survive the assault of sustained non-acting on their senses, but the men in this film are no ordinary men. They have clearly defined, er, objectives, and no obstacle is too difficult to mount …oops, surmount. So they indulge their paws on each other's wives.

In the meanwhile, Megha (Heena Rehman), wife of a rich industrialist Raj Solanki (Aryan Vaid), is rescued from a disaster by Aryan (Siddharth Koirala), the husband of Natasha, whose objective now is to just sleep with Megha - no, not Natasha's, Aryan's.

Megha also appears to encourage him since it is anyway a husband-swapping film, but suddenly she is murdered. Why is she killed? Who is the murderer? Did she make out with Aryan before she died? Do they show you the sex? To find the answers, you have to watch Fun, or visit www.smutnow.com for the latest free videos.

Fun is perhaps the farthest that Bollywood has gone in the sleaze race that includes films like Murder, Julie and Sheesha. The film is clearly about showing raunch and skin, and the script is just an excuse. Any actual story is only in the last 20 minutes when Aryan is implicated, and that is run-of-the-mill and too loose-ended. There is no class in the depiction of the flesh games either - it's just sleaze.

ADVERTISEMENT
This page was tagged for
hina rehman movie fun full porn
Fun hindi movie
Fun reviews
release date
Rajat Bedi, Siddharth Koirala
Follow @fullhyderabad
Follow fullhyd.com on
About Hyderabad
The Hyderabad Community
Improve fullhyd.com
More
Our Other Local Guides
Our other sites
© Copyright 1999-2009 LRR Technologies (Hyderabad), Pvt Ltd. All rights reserved. fullhyd, fullhyderabad, Welcome To The Neighbourhood are trademarks of LRR Technologies (Hyderabad) Pvt Ltd. The textual, graphic, audio and audiovisual material in this site is protected by copyright law. You may not copy, distribute, or use this material except as necessary for your personal, non-commercial use. Any trademarks are the properties of their respective owners. More on Hyderabad, India. Jobs in Hyderabad.