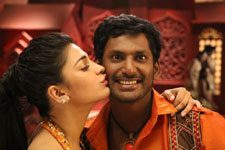 Kritika Deval / fullhyd.com
EDITOR RATING
5.5
Performances
Script
Music/Soundtrack
Visuals
6.5
4.0
5.5
7.0
Suggestions
Can watch again
No
Good for kids
No
Good for dates
No
Wait for OTT
Yes
An action-romance-family drama dubbed from Tamil, Pooja is an extraordinarily ordinary film, made up of an ordinary plotline moved along by ordinary characters saying and doing all of the ordinary things that are required for the film to end. It is not bad in any single way, but nor can you apply the adjective "good" to it all that much.

Let's get the things that did happen, over with. So, Vishal plays Vishal who lends money to farmers at the marketplace in the town of Bobbili. His slap-happy tendencies lead to the local "don" Singannapatrudu (Mukesh Tiwari) trying his best to wipe Vishal off of the face of this planet. Meanwhile, unbeknownst to either Vishal or Singanna, Singanna is also trying to discredit Vishal's family, which, contradictory to his humble abode and lifestyle in Bobbili, is actually quite wealthy and influential.

Oh, and there is also a "love" track involving Divya (Shruthi Hassan), which is quite pleasant but seems to have been gavaged into a story that seems to have had enough.

For the most part, Pooja will have you quite satisfied with your lot in life. The plot is especially mundane, but competent acting manages to make it just entertaining enough, especially when coupled with the occasionally witty dialogue, at least up until quarter of the way through the second half. Post this point, though, the film manages to lose all structure, stretching each plot point beyond recognition, and exponentially increasing the drama that the movie had kept at refreshingly low levels (relatively speaking, i. e. - it is a dubbed-from-Tamil masala we're talking about) up until then.

Talking about things that Pooja kept at refreshingly low levels, how 'bout the victim woman, are we right guys? The character of Divya, although lacking too much of a personality, is kept from being a watering pot victim right up until it becomes completely unavoidable. Also, the film contains very little actual gore despite being quite action-heavy. The comedy track, unlike in most Tamil movies, at least tries to integrate itself with the story line, and is actually clever-ish. There are little-to-zero vulgarity and double entendres.

And, most importantly of all, at least to this writer, there are comparatively fewer odds against which our hero must triumph, which means he gets to work a lot less harder than most of our "heroes" in order to solve problems that are the same amount of inconsequential, i. e. a lot amount. This, however, is also a characteristic that might have been helped along by the fact that the villain is rather dim, which doesn't say much for the overall importance relegated to character development in the movie.

Vishal is quite personable, and plays his character with charming conviction. It would be nice to see him in something other than this sort of mass entertainer. Shruthi Hassan is all the things that a South Indian heroine should be - pretty, bubbly and "glamorous" (whatever that means); however, she also brings in a blink-and-you'll-miss-it amount of intelligence to her otherwise mediocre character. Also, the chemistry shared by Vishal and Hassan works well, and lifts the mood of the film when the soggy plot weighs it down.

Sathyaraj, Soori, Mukesh Tiwari and the rest of the cast do as well as is possible with the half-baked characters they are expected to portray.

The cinematography is excellent and actively improves the quality of many a badly written scene. The edit team, though, should have gotten busier. The music matches the overall tone of the film - falling right at the middle of the spectrum between good and bad.

In all, Pooja is one of those rare family-oriented films that you can actually watch with your family without worrying about scandalizing or horrifying the old and the young. Too bad, it isn't good enough for you to actually go to the effort of gathering them all to watch it.
Share. Save. Connect.
Tweet
POOJAI (TAMIL) SNAPSHOT 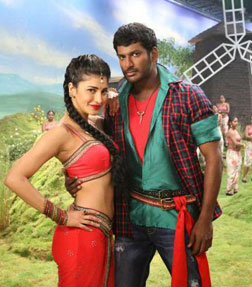 ADVERTISEMENT
This page was tagged for
poojai tamil movie 548
poojai tamil movie
poojai full movie in tamil
poojai Movie sex photos
tamil full movie Poojai by Vishal
Follow @fullhyderabad
Follow fullhyd.com on
About Hyderabad
The Hyderabad Community
Improve fullhyd.com
More
Our Other Local Guides
Our other sites
© Copyright 1999-2009 LRR Technologies (Hyderabad), Pvt Ltd. All rights reserved. fullhyd, fullhyderabad, Welcome To The Neighbourhood are trademarks of LRR Technologies (Hyderabad) Pvt Ltd. The textual, graphic, audio and audiovisual material in this site is protected by copyright law. You may not copy, distribute, or use this material except as necessary for your personal, non-commercial use. Any trademarks are the properties of their respective owners. More on Hyderabad, India. Jobs in Hyderabad.