Lipstick Under My Burkha Review 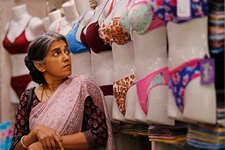 T J Reddy / fullhyd.com
EDITOR RATING
7.0
Performances
Script
Music/Soundtrack
Visuals
9.0
8.0
6.0
6.0
Suggestions
Can watch again
Yes
Good for kids
No
Good for dates
Yes
Wait to rent it
No
At a point in Alankrita Srivastava's admirably conceived Lipstick Under My Burkha, Usha (played by the 60-year-old Ratna Pathak) finds herself shopping for swimwear and talks about brassieres. For a split second I found myself cringing, and then the thematic starkness of the film came to fore. The barefaced fact that a woman who is currently the age of my grandmother was at the time of her passing shopping for some brand new delicates and had the urge to connect physically with a man struck a deep chord with me.

I found myself reminiscing about my grandmother and wondering if she ever had these thoughts and yearnings, and how many of those went unrequited because the society she was a part of deemed them unwomanly. So many hopes and dreams lost into the ether because quashing them seemed easier than exploring them (for seemingly obvious reasons at that).

Lipstick Under My Burkha (which could straightforwardly be retitled Lipstick Under My Ghunghat) follows the stories of four "ordinary" women who live in the almost-metropolitan city of Bhopal. Rihana is a school-going rebel who has the precociousness to live her dreams, Leela is a beautician stuck between a rock (her fiancée) and a hard place (her lover) in a claustrophobic small town, Shireen is a housewife and mother of three who cannot avoid the sexual advances of her domineering husband but wants to find a smidgen of independence by taking up a job (unbeknown to him), and Usha is a 55-year-old widow whose sexual world is resuscitated by means of having a telephonic romance with a swimming coach.

These stories the film presents are not as outlandish as they seem. A probing look into our own neighbourhoods might reveal many such ladies who have almost forgone their personal identities in the names of husbands, children, parents, pre-defined roles and the classic line "log kya kahenge". The women in the film, like most women you'd have come across, refuse to be suppressed by these norms, and in their find solace in their minds and actions while staying away from the judgemental gaze of the world. The first half of the film goes about exploring the psyche of these women with consummate ease.

Watching some sequences which have never been seen before in mainstream Indian cinema, I was hard pressed to find any faults in execution. The sheer level of immersion you feel as you learn the bits and pieces of what make these women wholly unique yet surprisingly relatable to is hard to put into words. The scenes serve as reminders to the many ill-conceived Women's Day ads that have clichéd lines such as "she is a mother", "she is a daughter" or "she is a sister", while forgetting to address the basic fact that SHE IS A HUMAN, and has more to offer when she is not pigeonholed into these archaic roles. The film is single-mindedly concerned with flouting these stereotypes.

However, as the second half rolls around and the characters need meaningful arcs to their stories, the film encounters its stumbling blocks. The writing that was infused with unapologetic originality through the first half has seeds of contrivances sown into it. This leads to an ending that feels out of sync with the rest of the film that preceded it. The statement being made which goes along the lines of "we have a long way to go before women get the due respect they deserve" is precise, but you can't help but feel that there could have been a better way to articulate it.

Although Lipstick Under My Burkha has structural problems, it is boosted by its four tremendously nuanced lead performances. Konkona Sen Sharma is at her best with character-oriented indie films, and she shines as the canvas of repressed emotion that is Shireen. Levity in the film comes from the antics of Rihana and Leela, but the absolute zenith of the film is the exceptional Ratna Pathak. Her portrayal of a woman who is only known by the facade of "Buaji" and never as the Usha who is grasping for a genuine connection underneath is heart-breaking and rib-tickling both at the same time. Each woman adds layer upon layer of complexity to her already well-written role, never once allowing the character to look like a caricature.

The men are not too far behind either as Sushant Singh and Vikrant Massey (who has a bright career ahead of him) bring chauvinistic terror and a boyish charm to the film respectively. But the film's songs leave a lot to be desired. They rarely act as able counterparts in quality to the story, and you are left wondering why a film with such a rich background score ever needed any songs.

When all is said and done, Lipstick Under My Burkha only wants to start a conversation. As much as Pahlaj Nihalani and his posse would have liked for a film like this not be released citing truly nonsensical whys and wherefores, this artistic expression by a woman of the world her counterparts inhabit is necessary viewing for all.

The film enjoins both men and women to go home and have clear and heartfelt conversations with each other. It wants the audience to ask the opposite (and same) gender about their feelings, hopes, dreams, wants, desires, and many such cogs that make us human. Like the characters in it the film has flaws, but (again) like the characters these flaws do not make the film irredeemable, but only relatable.
Share. Save. Connect.
Tweet
LIPSTICK UNDER MY BURKHA SNAPSHOT 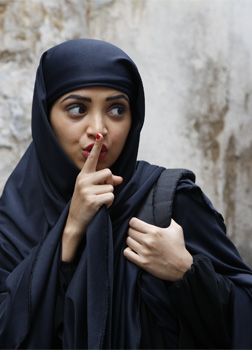 ADVERTISEMENT
This page was tagged for
lipstick under my burkha 3 movie
lipstick under my burkha movie movies
lipstick under my burkha movie in hindi kickass
hindi movie full lipstick
Lipstick Under My Burkha hindi movie
Follow @fullhyderabad
Follow fullhyd.com on
About Hyderabad
The Hyderabad Community
Improve fullhyd.com
More
Our Other Local Guides
Our other sites
© Copyright 1999-2009 LRR Technologies (Hyderabad), Pvt Ltd. All rights reserved. fullhyd, fullhyderabad, Welcome To The Neighbourhood are trademarks of LRR Technologies (Hyderabad) Pvt Ltd. The textual, graphic, audio and audiovisual material in this site is protected by copyright law. You may not copy, distribute, or use this material except as necessary for your personal, non-commercial use. Any trademarks are the properties of their respective owners. More on Hyderabad, India. Jobs in Hyderabad.