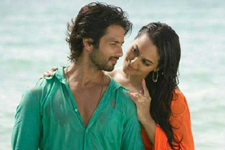 Swayamsrestha Kar / fullhyd.com
EDITOR RATING
3.0
Performances
Script
Music/Soundtrack
Visuals
3.0
3.0
1.0
3.5
Suggestions
Can watch again
No
Good for kids
No
Good for dates
No
Wait for OTT
Yes
We blame Dabanng, we really do. Thanks to the antics of one Chulbul Pandey, the word "hero" now means having one's own signature epigram, bashing goons up in the most exaggerated ways possible, ample pelvic-thrusting and bosom-straining, and most importantly, romancing Sonakshi Sinha. Since she lends herself so prolifically to films of this genre - can we officially name this the "Dabanng-pop" genre? - we thought we'd do away with the generic phrase "female lead".

Also, Dabanng-pop films should come with a statutory warning against the blatant misogynism that they indulge in, and ask viewers to "please not repeat this behaviour at home".

Just for the gratuitous misogynism itself, and also for the re-inforcement of traditional stereotypes of masculinity that the film has the audacity to parade around without the slightest iota of self-consciousness, we are in a good mind to rate it in the negatives. We, as a country, have a serious need for revamping of gender-related perspectives.

The idea that the typical "mard" - the one who can shout the loudest, play the dirtiest, and hit the hardest - deserves to be followed and revered is the most ludicrous one, not to mention, also the most poisonous and insidious in terms of the behaviour that it engenders. Any film that propagates this idea, not as a means of satire, which, through amplification, aims at reformation, but as the ideological fodder behind its premise, is to be regarded as fundamentally flawed in this day and age.

R... Rajkumaar has already earned the distinction of having the most ridiculous title that has been bestowed on any film in recent times (at least "Goliyon Ki Raasleela Ram Leela" made some poetic sense). Now, it's gunning for the big award, the "worst film of 2013" wreath that Grand Masti was protectively crouching over.

The titular Rajkumar (Shahid Kapoor) is a brawns-for-hire goon caught between the heads of two opium-trading gangs in a place called... err... we didn't quite catch the name of the village, but hey, blame the background music that was specifically composed to torture human ear-drums!

One of these warlords is Shivraj (Sonu Sood), who is the better-looking drug baron, but is still every bit as evil as Manik Parmar (Ashish Vidyarthi), the rival drug lord.

Now, Rajkumar mysteriously appears in this village one day, and almost immediately, comes across Chanda (Sonakshi Sinha), on whom he almost immediately imprints... oops - we meant "falls in love with". In our defence, the knee-jerk lust-cum-love is very reminiscent of the Jacob Black-Reneesme angle in Twilight.

In the pursuit of his love, Rajkumar asks Chanda out on a date like any sensible bloke who's crushing on a girl, and they have just embarked on a mature relationship as two consenting adults, when we are crudely brought back from our dream world devoid of eve-teasing and female objectification by the loud thumping notes of "Gandi Baat".

Hardly has Rajkumar claimed Chanda as "his own", when Shivraj starts eying the same luscious strip of meat with all the ravenous drooling gaze of a hungry canine. Chanda alternates between showering Rajkumar with the usual gaali galoch that the country's roadside romeos lightly flick away with a wave everyday, and showering him with sloppy kisses on the phone.

In the meantime, Shivraj makes a deal with Parmar; ultimatums are issued with theatrical flourishes that would make the best Opera performers look like a bunch of amateur nautankiwalas, and a million songs - whose lyrics progressively degenerate into squirm-inducing lines that even makers of a condom ad wouldn't use out of fear of sounding crass and vulgar - are sung.

What, oh what else can you say about that monstrous abomination called "Saree Ke Fall Sa"?

Someone has to persuade Prabhu Deva that he is not as good a director (or scriptwriter) as he thinks he is. And even if he insists on making films, can he make guest appearances in them that last longer than the amount of time it takes to moonwalk across the screen with the hero during the generic "intro song"?

The cinematography is weird at times because of the camera angles that the cinematographer obviously thought were avant-garde - the only limits that they end up pushing are those of our collective visual tolerance.

The editing is extremely shabby, and the less said about the screenplay, the better. The characters are thoroughly flat, insipid, and at times, even downright exasperating.

Seriously, whenever Shivraj's pet astrologer (played by an OTT Asrani) opened his mouth, this reviewer entertained some very murderous thoughts about the otherwise-harmless people whose careers consist of predicting how an individual's future is influenced by large bodies of rock and gaseous matter that drift around in space.

Shahid Kapoor does everything that heroes in such films do. He dances, thrusts, makes vulgar expressions, throws punches like there was no tomorrow, and then returns to do some more rhythmic thrusting to the tune of the next tune-less song. But as other characters joke in the film sometimes, he does look too much like a kid in the world of the big and the bad.

Sonakshi Sinha is an old-timer as far as movies like these are concerned. She could practically write a rule-book for beginners by now.

Sonu Sood is appropriately menacing at times, while failing at comedy quite spectacularly. It's all equally terrible to behold.

R... Rajkumar is one of those films that make sensible people wish for miraculous things, like time-travel. That way, you can go back and prevent your past self from buying that blasted ticket!
Share. Save. Connect.
Tweet
R... RAJKUMAR SNAPSHOT 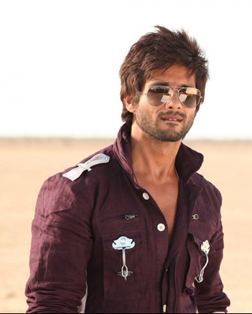 ADVERTISEMENT
This page was tagged for
the r... rajkumar hindi dubbed movie
R... Rajkumar hindi movie
R... Rajkumar reviews
release date
Shahid Kapoor, Sonakshi Sinha
Follow @fullhyderabad
Follow fullhyd.com on
About Hyderabad
The Hyderabad Community
Improve fullhyd.com
More
Our Other Local Guides
Our other sites
© Copyright 1999-2009 LRR Technologies (Hyderabad), Pvt Ltd. All rights reserved. fullhyd, fullhyderabad, Welcome To The Neighbourhood are trademarks of LRR Technologies (Hyderabad) Pvt Ltd. The textual, graphic, audio and audiovisual material in this site is protected by copyright law. You may not copy, distribute, or use this material except as necessary for your personal, non-commercial use. Any trademarks are the properties of their respective owners. More on Hyderabad, India. Jobs in Hyderabad.