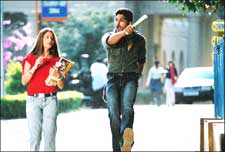 EDITOR RATING
5.0
Performances
Script
Music/Soundtrack
Visuals
NA
NA
NA
NA
Suggestions
Can watch again
NA
Good for kids
NA
Good for dates
NA
Wait for OTT
NA
What does the word Bunny remind you of? Chocolates? Cuddly Toys? A man jumping around in his underwear in public? Oh, anyway, forget it. It's not a very important question.

Bunny (Allu Aravind) is a college student endowed with special superpowers because of his devotion to Lord Narasimha, given how he bashes up 20 armed strongmen single-handedly. Either that, or it's the frustration from being named like that. Try calling the next guy you see, "Bunny".

The film starts with his bashing up 5 roughneck college seniors for trying to act fresh with Mahalakshmi (Gowri Munjal), which in retrospect seems like a wise script idea - it would have been stupid if the movie started with him bashing up Mahalakshmi for acting fresh with 5 roughneck college seniors. This impresses her - no, not the wise script idea, but the fact that the film has started. She's fairly easily pleased.

But Mahalakshmi has a super-rich dad Somaraju (Prakash Raj), who cannot tolerate anyone making eyes at his daughter. Now most dads will not tolerate people making eyes at their daughters, but they do it in their spare time - for Somaraju, it's a full-time occupation. He uses his money, his goons, his dogs, his vans, his furniture, his crockery, his DVD players, his coin collection, his shaving cream, his junk mail, his secret photographs of him exposing, his old résumés, his discount coupons cut out from newspapers (neatly along the dotted line) and everything else he has, for the sole purpose of keeping men off her.

But Bunny decides to forgive him for this, and magnanimously goes ahead and romances Mahalakshmi. This understandably pisses Somaraju off, but he loves his daughter too much, and agrees to let her marry Bunny. Only, he lacks the foresight to ask Bunny if he has the habit of doing climax fights in only his briefs. To most of us it seems like something that will happen only to others. This film shows what a real threat it is. It could happen to YOU. Yes, YOUR son-in-law could do it to YOU. There's a new thing to be worried about.

Anyway, it transpires that Bunny is none other than the son of the person (Sarath Kumar) whom Somaraju had brutally murdered for his wealth. And he is fighting to get all of it back. The movie hurtles into a public climax fight which has… yes, that's right.

The film has a tale that has been used since before underwear was invented - son avenging his parents' murderers and getting the wealth back. So no marks there. Also, how can you take seriously a film that has a 19-year-old student bashing up 20 armed musclemen single-handedly? Where are the brilliant script ideas to show a practical handling of the situation?

No marks for performances, either - Allu Arjun is better than some of the new breed of actors, and dances well, but he's certainly not in the entertaining league of any of the big ones of Tollywood like Chiranjeevi or Venkatesh. His dialogue-delivery is weak, and, sometimes, so are the dialogues themselves ("Avunu, thokkalo!" - sheesh!).

Sarath Kumar and Prakash Raj are pretty good, though the latter doesn't have a classily crafted role here. Also, he's in every film these days - a bad career move. Mahalakshmi continues Tollywood's woes with its lead ladies. The music is above average, though some of the lyrics are earthy.

Something to get to only if there's no better film around.
Share. Save. Connect.
Tweet
BUNNY SNAPSHOT

ADVERTISEMENT
This page was tagged for
Bunny telugu movie
Bunny reviews
release date
Allu Arjun, Gowri Munjal
theatres list
Follow @fullhyderabad
Follow fullhyd.com on
About Hyderabad
The Hyderabad Community
Improve fullhyd.com
More
Our Other Local Guides
Our other sites
© Copyright 1999-2009 LRR Technologies (Hyderabad), Pvt Ltd. All rights reserved. fullhyd, fullhyderabad, Welcome To The Neighbourhood are trademarks of LRR Technologies (Hyderabad) Pvt Ltd. The textual, graphic, audio and audiovisual material in this site is protected by copyright law. You may not copy, distribute, or use this material except as necessary for your personal, non-commercial use. Any trademarks are the properties of their respective owners. More on Hyderabad, India. Jobs in Hyderabad.