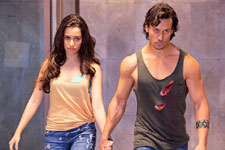 Josh / fullhyd.com
EDITOR RATING
3.5
Performances
Script
Music/Soundtrack
Visuals
4.0
2.0
4.0
6.0
Suggestions
Can watch again
No
Good for kids
No
Good for dates
Yes
Wait for OTT
Yes
Ronnie (Tiger Shroff, whose smiles also look like they are facial muscle exercises) is being chased by a bunch of Thai goons. He sneaks into narrow lanes and bylanes with plenty of hustle-bustle. The goons are hot on the trail brandishing knives, and Ronnie is running mad. A vegetable cart comes in his way, and zoop! He jumps over the cart and continues running. An auto-rickshaw comes in his way, and whoosh! He darts through the opening in the rickshaw and then darts out of the other opening. Wow, we've never seen anything like it before! Er, wait. We did. We, of course, did. In Ong Bak.

Ong Bak: Muay Thai Warrior is a 2003 Thai martial arts action film featuring stunt choreography by Panna Rittikrai. It is rated 86% fresh on Rotten Tomatoes despite having a humdrum plot solely because of exciting action choreography unlike anything seen before. If you find time for it you need to watch it sometime.

Meanwhile in Baaghi, Siya (Shraddha Kapoor, in a light blue bikini that justifies the ticket money for some folks) has a mental disorder which causes her to speak to rain as if it were a living thing, and unhesitatingly launch into dutifully choreographed dance routines in public places like railway stations when it rains. Lunacy of this sort was witnessed earlier, too. In Varsham.

Varsham is a 2004 Telugu blockbuster which grossed Rs. 22 crores back at that time. It is a potboiler which was made with some finesse on the parts of the director, cinematographer and art director. Tremendously entertaining and filled with chartbusting tunes by Devi Sri Prasad, it is a popcorn devourer to this day. If you find time for it you need to watch Varsham sometime.

Oh right, we were talking about Baaghi. Raghav Shetty (a formidable Sudheer Babu who's still not fully comfortable with the camera) is a criminal overlord living in the top floor of an edifice filled with the low lives of Bangkok. Each floor brandishes its own set of killer machines; well-worked-out criminals with no scruples. Ronnie has to get to the top of this fatal building to free Siya. So he climbs floor after bloodthirsty floor decimating anything and anybody that comes his way. Very creative setting for an action film - which this reviewer happened to watch just last month.

The Raid Redemption (2011) is an Indonesian action thriller showcasing the Indonesian martial art Pencak Silat. With an inventive premise as elaborated in the earlier paragraph, the film features some superb action choreography (by the lead actor and the second villain). What's intriguing about the action is how the people actually seem to tire and there are quite a few misses for every number of hits. This work is a far cry from the unrealistically perfect-looking routines that we come across in action films. Real fighting can be messy, and no film makes use of it like this one does. You really need to watch The Raid Redemption!

There's nothing original in Baaghi. The score is lifted, the songs are uninteresting, and the performances uninterested. There is a lot of jaw-dropping action, but even that gets so monotonous that you soon pick up your jaw and even contemplate about that root canal dentist appointment before the action scene is over. As for the plot, the movie goes from plot device to plot device like a lumberjack going from tree to tree - hacking each one to death before moving on to the next one. And boy - the film is so derivative, there is nothing integral to it (heh heh!).

Sunil Grover's turn as the jocular but slimy father of Siya is so fascinating, you just don't recollect his famous television persona Gutthi during the film. The only other good things in the movie are the action sequences. The bloopers reel towards the end shows just how much effort went into making those scenes. That is wonderful, and we honestly laud the efforts behind the scenes, but it doesn't make good cinema. Like one insightful economist said, if effort was all that mattered, the richest person would be the daily labourer who sweats and bleeds under the sun every day of his life.

Ideally, you'd leave this film alone and befriend Netflix this weekend. However, if you have a ritual where you visit a movie hall every weekend, and you can satisfy yourself with good-looking people and good-looking frames, and you are very clear that you'll watch no film where you might need subtitles, then you can perhaps catch Baaghi.
Share. Save. Connect.
Tweet
BAAGHI SNAPSHOT 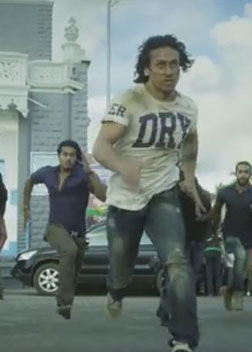 ADVERTISEMENT
This page was tagged for
baaghi rhoni goes in the building to save siya part1
Baaghi hindi movie
Baaghi reviews
release date
Tiger Shroff, Shraddha Kapoor
Follow @fullhyderabad
Follow fullhyd.com on
About Hyderabad
The Hyderabad Community
Improve fullhyd.com
More
Our Other Local Guides
Our other sites
© Copyright 1999-2009 LRR Technologies (Hyderabad), Pvt Ltd. All rights reserved. fullhyd, fullhyderabad, Welcome To The Neighbourhood are trademarks of LRR Technologies (Hyderabad) Pvt Ltd. The textual, graphic, audio and audiovisual material in this site is protected by copyright law. You may not copy, distribute, or use this material except as necessary for your personal, non-commercial use. Any trademarks are the properties of their respective owners. More on Hyderabad, India. Jobs in Hyderabad.