The Lord Of The Rings: The Return Of The King Review 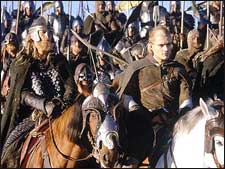 Deepa Menon / fullhyd.com
EDITOR RATING
8.0
Performances
Script
Music/Soundtrack
Visuals
NA
NA
NA
NA
Suggestions
Can watch again
NA
Good for kids
NA
Good for dates
NA
Wait for OTT
NA
It’s big! It’s beautiful! And it’s won enough of them little golden statues to make Peter Jackson’s mantelpiece very happy. The Return of the King is finally here, and Tolkien fans can relax... the film, like the other two in the trilogy, has been one of the best book-to-film adaptations that Hollywood has ever seen. Ladies and gentlemen, they didn’t kill it.

We start off with the story of one of the tale’s pivotal characters ...a quick background on the finding of the Ring and Smeagol’s subsequent descent into computer animation. Cut to the schizophrenic Gollum still arguing with himself, torn between loyalty to Frodo and desire for the Ring. Desire wins, and so Gollum makes dastardly plans.

We are otherwise where we left off, as Frodo (Elijah Wood) wearily continues his journey in dark and sticky Mordor to destroy the Ring in Mount Doom, with Gollum leading the way and suspicious Sam (Sean Astin) in tow. The Ring is getting heavier, the path more tortuous, and Frodo’s patience and trust is wearing very thin.

Meanwhile, the once-great city of Minas Tirith is under attack, and Rohan has to decide where its loyalties lie. Aragorn (Viggo Mortensen) must reclaim the broken blade that has been forged again... the sword of his ancestor Elendil, and take on the kingship of Gondor. He has to somehow summon up an army large and powerful enough to make a sizable dent in Sauron’s forces, and for this he must turn to some very pissed-off dead people with serious dermatological issues. But we can’t give away any more.

Will two little people with hairy feet and staunch hearts be able to save Middle Earth from the terror of the Dark Lord? Will the true king of Gondor bring happiness and peace to his lands once more? Will Cate Blanchett stop smiling like she’s a demented elf? These are just some of the questions that will be answered in this tale of unlikely and underestimated heroes (Seabiscuit, anyone?).

The battle scenes of the first attack on Minas Tirith are lacklustre, and the cries of the Nazgul’s dragons may have you tearing your hair out, but hang on. It does get better. There are huge elephants and undead warriors involved. And one very cool ‘You go, girl!’ moment in the film that will have all the women in the audience cheering their heads off. Proving that there are few things as empowering as a heartbroken but strong woman in full armour, fighting with the best of them on a gory battlefield. Eowyn kicks ass.

Aragorn loses much of his rugged sexiness when he dons the sissy crown, and Liv Tyler is annoying as ever as pouty, about-to-cry-any-moment-now Arwen, but these are minor irritants. There are some moments of much joy, like when the riders of Rohan finally arrive at Minas Tirith and blow their battle horn, and the sun’s rays come with them, and all that is good and beautiful and brave and honourable makes your heart soar with hope. That’s what good filmmaking is all about, innit?

Any movie that can make entire Hyderabadi theatre audiences cheer, clap, laugh and hoot has to be a no-brainer (only kidding, of course). So settle back in your seat... you’re soon going to cling on to the edge of it anyway... and place yourself in the immensely capable hands of the grubby Peter Jackson. He will show you worlds you have only seen in the workings of your feeble imagination, and take you on a thrill-ride of elephantine proportions. And pull your unresisting heartstrings while he’s at it.

Go on. Give in to the madness.