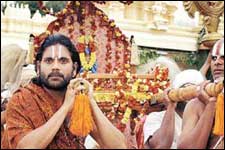 Sri Ramadasu is a full-fledged venture on the 17th century legendary devotee who did not keep his devotion within proper “limitation”, causing major upheavals in his life, and forcing God to interfere against the course of nature to bail him out.

And if you did not know even before the movie was released, it is going to be one of the biggest hits in Telugu cinema. If you don’t believe us, ask all those who saw Annamayya. And continue to see it.

Beyond star value and professional story-telling, what works for Sri Ramadasu is you. It only shows you what you already know you will see, and what you went in to see. This is a film you are not judging – you are only taking it in.

It helps, of course, that it is seasoned actors and showmen doing the job. If you have any reason to be grateful to God, or if you want to be, the tears flow faster. Perhaps, even otherwise. It’s hard to believe how many you see with moist eyes when the lights go on at the end. And the age and culture brackets they belong to.

Kancherla Gopanna (Nagarjuna) marries Kamala (Sneha), daring a prophecy that whoever marries her will go to jail. He is appointed Tehsildar (modern day Collector) at Bhadrachalam by Tani Shah (Nasser), the Deccan king who rules from Hyderabad. He displaces the king’s own brother-in-law (Jayaprakash Reddy), who swears revenge. Due to his honest ways, Gopanna makes other powerful enemies, too.

Meanwhile, Thammakka (Sujatha), and old ardent devotee of Lord Rama, has a dream that leads her to discover an idol of the Lord, His consort and His brother, in a forest in Bhadrachalam. Her fervor to protect the idol and her dream to build a temple for it move Gopanna, whose life she saves one day when his enemies try to attack him.

The thoughts soon take over his mind, and he moves from the lavish quarters of the Tehsildar to living under a tree near the idol, deciding that that is where he will stay until he builds a temple for the Lord. With the help of the villagers, he collects money for the purpose from the Tehsil and, after paying the King his taxes, uses the remaining 600,000 gold coins to build a magnificent temple.

The Lord Himself moves into the neighbourhood to see for Himself the construction of what will be one of the greatest shrines ever for Him, and stays there with Sita and Lakshmana.

However, the enemies first do not deliver to the King the letter Gopanna sends requesting permission, and then poison the King’s mind against Gopanna. Tani Shah imprisons Ramadas (as Gopanna is now called), and subjects him to brutal torture to extract a confession and an apology.

Yes, in case you missed it, there are the songs. All the immortal gems you grew up listening to, whether by Bala Murali Krishna or by M S Subbalakshmi:

Needless to say, the Lord has His reasons for making Gopanna suffer. And when the time comes, He does what He can. Which is what only He can.

Raghavendra Rao, of course, takes his cinematic licenses. Like the whole role of ANR as Kabir. And the parrot episode – various versions have narrated that Ramadas had to be in jail for imprisoning a parrot, but none (at least among those this writer has read) have said that it was the Lord Himself as the parrot.

But nobody’s really looking there. They did not come to count the cinematic licenses.

Several, however, came for star power too. Which brings us to Nagarjuna.

To understate it, he’s good.

Even if you’re among those who’ve mostly been indifferent to Nagarjuna as an actor, you’ll agree that something seems to make him brilliant in these roles. He roots for the Gopanna lost to the world, the Ramadasu. If he doesn’t pick up some awards this year, someone else would have had to be exceptional.

Several people of Andhra perhaps have had Suman as their face for Lord Venkateshwara whenever they prayed, for several days after watching Annamayya. Lord Rama in this film isn’t altogether as chirpy as Lord Venkateshwara was in Annamayya, but mostly, everyone’s happy that it’s Suman again.

Sneha is quite good, especially when she needs to take over the pleading for mercy. Perfect casting. And Archana is surprisingly emotive in an abbreviated role as the helpless Sita.

In other news, the CGI looks like what was used 30 years back. And the comic track is all about weird mannerisms than about actual humor. But guess what? Nobody’s come looking there.

Sri Ramadasu is one of those films that are an implant in your sub-conscious. It is an exposure to the outer extreme of something “good”, which makes you feel a prick in your head every so often that maybe you should do something in that direction, too.

The film can marginally enhance the role of God in your life, but it will do it permanently. It can make you a marginally better human being. If you are still doing all the same wrong deeds, at least from now on you will start feeling the need to give yourself stronger explanations. Which is perhaps a good starting point.

Religion, like they say, is the opium of the masses. If you are part of the simple mass, with no irreconciliable differences with the concept of God or highly evolved standpoints on religion, this is a great experience.
Share. Save. Connect.
Tweet
SRI RAMADASU SNAPSHOT

I am Raghavendra Mahendrakar, Working as Web & UI Designer at INFOSYS Technologies, Bangalore.

I am very impressed with the Sri Ramadasu Telugu Movie. On this inspiration, i had launched a website on my Lord Sree Rama of Bhadrachalam www.sitaramaswamy.com

Sri Ramadasu is a great bhakth of Lord Sree Ram and built a temple for his Lord Seetha Ramachandra Swamy. Then why can't i built a website for my Lord Sree Ram. So, on that day i decided to built a beautiful website on Bhadrachalam Lord Seetha Ramachandra Swamy. After a long research on these, finally on 30th December, 2006 on Yikunta Yekadasi day, i launched this website www.sitaramaswamy.com

I am planning soon to donate this website to Bhadrachalam Seetha Ramachandra Swamy Trust. I am sharing my wonderful experience with you. I just want you to refer this website to your all friends and Andhra Peoples in worldwide.

And also "Wish You A Happy & Prosperous New Year & Sankranthi".

ADVERTISEMENT
This page was tagged for
sri ramadasu telugu full movie
sri ramadasu full movie
ratham whcih came to take sri ramadasu
www.sree ramadas cinima .com
sri ramadasu telugu movie
Follow @fullhyderabad
Follow fullhyd.com on
About Hyderabad
The Hyderabad Community
Improve fullhyd.com
More
Our Other Local Guides
Our other sites
© Copyright 1999-2009 LRR Technologies (Hyderabad), Pvt Ltd. All rights reserved. fullhyd, fullhyderabad, Welcome To The Neighbourhood are trademarks of LRR Technologies (Hyderabad) Pvt Ltd. The textual, graphic, audio and audiovisual material in this site is protected by copyright law. You may not copy, distribute, or use this material except as necessary for your personal, non-commercial use. Any trademarks are the properties of their respective owners. More on Hyderabad, India. Jobs in Hyderabad.