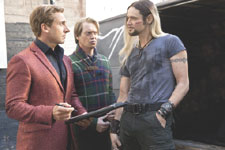 Nupur Barua / fullhyd.com
EDITOR RATING
6.0
Performances
Script
Music/Soundtrack
Visuals
5.0
4.0
5.0
5.0
Suggestions
Can watch again
No
Good for kids
No
Good for dates
No
Wait to rent it
No
India is not the only country where scripts are re-written for superstars. Hollywood does it, too, as The Incredible Burt Wonderstone has proved. Content is not always king. Sometimes you need to sacrifice creativity for stardom. And then you pay the price, of course.

Las Vegas still lives in the 1980s, in many ways. And one of the most enduring images of an entertainer in this oasis of gambling is the magician. You know the type - the ones that wear ruffled-front shirts and crazily bad wigs, and have enough pancake on their face to embarrass Martha Stewart (not too different from the magicians we sometimes glimpse in travelling fairs in this country).

Burt Wonderstone (Steve Carell) is one such entertainer. He is a magician who was immensely popular not too long ago. Now he finds himself booked by old people's and children's homes. The limelight has been stolen, and is now owned by Steve Gray (Jim Carrey), the savvy, enigmatic street magician. Who wants to pay for dimly lit stage shows that are yawn-inducing, when they can watch more thrills and tricks for free? Gray is the future, and Burt now wants to be back in the conscious minds of all those who love magic, because he, as he knows, is the true artiste. Gray is a conman, he believes.

There is a problem - Burt cannot combat Gray alone. He needs practical and moral support. None of his contemporaries will help him, though, because not only do they have to look out for themselves, but also because Burt is an obnoxious, self-centred, difficult man. In sheer desperation, he turns to his childhood friend Anton Marvelton (Steve Buscemi).

The story is as simple as they come - this is the journey of a man who has touched success, reached a peak, and then crash-landed on his butt. If he has to face himself in the mirror, and not have regrets, he has to undo some of the harm that he has caused on his way up, and also have the decency to admit his own mistakes. It is the story of a self-obsessed man who learns how to walk the road to humility, which is his only hope for salvation.

And then there is the humour. Slapstick, satire, stand-up, self-effacing, self-deprecating, synchronised, sarcasm, silly - you name it, and you will find it here. Some of the supporting characters are hilarious, especially the German magician who loves cats.

Most of the laughs are concentrated in the first half-hour of the movie, though, and just when you think the entire movie is going to be one hell of a roller-coaster ride, it gets serious. The basis of the movie is the emotional journey that Burt undertakes in an effort to become a better person, and that bit gets a little heavy towards the end.

Needless to say, most of the movie is predictable. It stops short of being maudlin fare because of the comedy.

Burt has to touch base with who he really is, before he can rediscover the magic inside him that once made him an entertainer. And in the process, he manages to entertain the audience of the film, because that is what the life of a performer is all about. We do not really care how much pain these entertainers go through to get to where they are, as long as we get our share of laughs and thrills.

The writers of the movie, John Francis Daley and Jonathan Goldstein, who earlier gave us movies like Horrible Bosses, have obviously done a thorough research on Las Vegas performers, but they also changed the script more than a couple of times.

In the original, Steve Gray is a younger magician, and therefore a more palpable threat to the ageing Burt Wonderstone. That changed when Jim Carrey was cast as Gray.

The original did not have an Anton Marvelton, either, but the writers felt that bringing in a soured friendship added to the character. And it does.

Steve Carell is a marvel of a man. He is the Amol Palekar of the American film industry. He underplays his role so well that he becomes the character, and you laugh and cry with him, never hating him even when he is the most insufferable person you have ever come across.

And Jim Carrey does what he did best so many years ago - overplay the character. It works. All the exaggerated body language and expressions make him menacing and surreal, and therefore a great "villain", so to speak. Both Carell and Carrey play off each other to maintain the balance that this rollercoaster of a movie requires.

The supporting cast is able and believable. Steve Buscemi is still the wronged man, after all those movies, and he has the face to carry it off. Alan Arkin as Burt's inspiration is fantastic. Olivia Wilde does her part with conviction, but she is overshadowed by the other actors.

Production design is authentic, and also has a touch of magic in it. The environment spills over into the theatre, almost like a 3D movie.

The costumes are well-researched, too. The cinematography is commendable - never too intrusive, and yet effective. The background score deserves a special mention, too.

If you are a fan of magic and of fantasy, and if you believe in retribution and redemption, then The Incredible Burt Wonderstone is definitely the movie you need to watch this weekend. Also recommended for Steve Carell and Jim Carrey fans. And for all those who have a bizarre sense of humour.
Share. Save. Connect.
Tweet
THE INCREDIBLE BURT WONDERSTONE SNAPSHOT 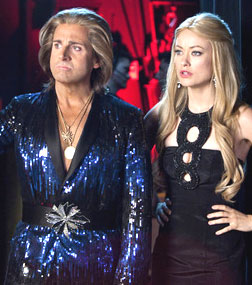 ADVERTISEMENT
This page was tagged for
The Incredible Burt Wonderstone english movie
The Incredible Burt Wonderstone reviews
release date
Steve Carell, Steve Buscemi
theatres list
Follow @fullhyderabad
Follow fullhyd.com on
About Hyderabad
The Hyderabad Community
Improve fullhyd.com
More
Our Other Local Guides
Our other sites
© Copyright 1999-2009 LRR Technologies (Hyderabad), Pvt Ltd. All rights reserved. fullhyd, fullhyderabad, Welcome To The Neighbourhood are trademarks of LRR Technologies (Hyderabad) Pvt Ltd. The textual, graphic, audio and audiovisual material in this site is protected by copyright law. You may not copy, distribute, or use this material except as necessary for your personal, non-commercial use. Any trademarks are the properties of their respective owners. More on Hyderabad, India. Jobs in Hyderabad.