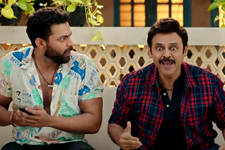 F3 is the story of a motley crew of scam artists. Venky (Venkatesh) is an unmarried, middle-class man who throws good money after bad, chasing a string of get-rich-quick schemes. His partner-in-crime, Varun (Varun Tej), is an orphan loafer who doesn't have a penny to his name, but nonetheless daydreams of being Ambani-rich. Prasad (Rajendra Prasad) is a cop gone rogue. Rounding out the crew are the shrewd ladies of the Pragathi family, including daughters Harika (Tamannah) and Honey (Mehreen Pirzada).

The four grifters cross paths when Varun hatches a plan to dupe a rich girl into marrying him. At a shopping mall, he spots a posh woman waltzing in and out of luxury stores, and follows her Range Rover to her palatial home. Little does he know that she is not the lady of the palace, but their maid. In fact, this honeypot is Ms. Honey, a master swindler herself.

Varun spends all of pal Venky's money to impress Honey in the hopes of inheriting her millions. But when the whole charade is exposed and the scammers realize that they have been chasing each other's tails with no mega-fortune to be had, they decide to end it all and kill themselves. Ah, but one last scamming opportunity comes by.

Director and writer Anil Ravipudi has but one success metric for his movie - maximum laughs per unit time - and he delivers on it exceedingly well. Slapstick jokes, witticisms, funny faces, crude sound effects, anything goes. The gags come at you as if out of a machine gun, one after the other, at a breathless clip, leaving you in splits. In one memorable bull-fighting scene, Venky wins over the animal with sentimental crying, as the Suryavamsam song "rojave chinni rojave" plays in the background. It is one of those spit-your-drink-out moments that you'll remember for a while.

Whether its Venky's night blindness, Varun's st-st-st-utter or Honey's tics, each character has a signature flaw that is exploited to max comedic effect. Such physical gags risk veering into cringe, but thanks to a cast of veteran actors, F3 walks that tightrope with uncanny precision. Sunil, who plays Varun's wisecracking sidekick, never misses a beat. Vennela Kishore, cast as an over-enthusiastic "pan-India junior artist" has some of the best lines of the movie. Veteran comedians Rajendra Prasad and Ali expectedly pack in plenty of punch in their scenes.

Amongst the ladies, Tamannah is ironically a lot funnier when she dresses up as a man and unwittingly becomes the object of another girl's attention. Character actor Pragathi, as the mother of Harika and Honey, is a revelation.

Ultimately though, Venkatesh is the comical core of the movie. His comedic timing is as impeccable as ever, and he carries every gag and punch line right up to the end zone. If there is one laggard in the cast, it is Varun Tej, whose stiff bodybuilder physique is ill-suited for the many, many awkward physical gags he is tasked with performing.

A low point of the movie are its unremarkable and unnecessary songs, including an item number starring Pooja Hegde.

For a movie that is gagged to its neck in ludicrous jokes, F3 still has a surprisingly solid plot. Perhaps that's the reason it works. In the second half of the movie, when all the swindlers band together to steal the inheritance of a business mogul (Murali Sharma), the story takes such unexpected turns that you can forgive all the silliness. The climax of the movie, aptly located in a toy factory, is a real doozy. It is cartoon physics at play - glorious chaos.

In a world of stodgy and serious cinema that guns for our hearts and minds, F3 reaches for our funny bones and tickles us till we keel over from laughter. It is such shameless fun - the kind you have when you suck on a ripe nuziveedu mango alone at home with no one watching, its sweet juices coating your mouth and face, trickling down to your elbow, making a good kind of mess. 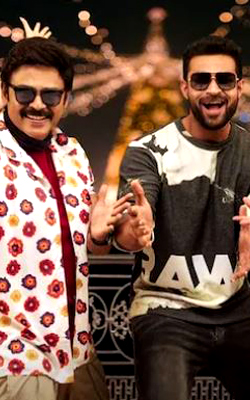 ADVERTISEMENT
This page was tagged for
F3: Fun and Frustration telugu movie
F3: Fun and Frustration reviews
release date
Venkatesh Daggubati, Varun Tej
theatres list
Follow @fullhyderabad
Follow fullhyd.com on
About Hyderabad
The Hyderabad Community
Improve fullhyd.com
More
Our Other Local Guides
Our other sites
© Copyright 1999-2009 LRR Technologies (Hyderabad), Pvt Ltd. All rights reserved. fullhyd, fullhyderabad, Welcome To The Neighbourhood are trademarks of LRR Technologies (Hyderabad) Pvt Ltd. The textual, graphic, audio and audiovisual material in this site is protected by copyright law. You may not copy, distribute, or use this material except as necessary for your personal, non-commercial use. Any trademarks are the properties of their respective owners. More on Hyderabad, India. Jobs in Hyderabad.