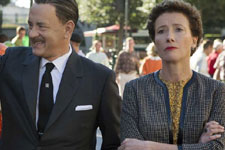 Nupur Barua / fullhyd.com
EDITOR RATING
7.0
Performances
Script
Music/Soundtrack
Visuals
8.0
7.0
8.0
7.0
Suggestions
Can watch again
Yes
Good for kids
Yes
Good for dates
Yes
Wait to rent it
No
It is never easy to let go of your creation and give it to another being to mould it as he will. That, however, is how movies are made from books. Saving Mr. Banks is an example of the process that goes into convincing authors to compromise a bit, but the wonder here is that this is not about just another author and filmmaker. It is about Walt Disney and the author of the Mary Poppins series, Pamela Travers a.k.a. Helen Goff, and their difficult collaboration that finally culminated in the movie that children and adults still love.

Pamela Travers (Emma Thompson) has been pursued by Walt Disney (Tom Hanks) for over 20 years. He wants to fulfil the promise that he made to his daughters - that he would bring to life, on screen, their favourite character Mary Poppins. Travers, leading a conventionally prim and proper life in London, does not want to make her favourite creation a caricature, and definitely not by Americans.

Her agent Diarmuid Russell (Ronan Vibert) finally convinces her that she needs the money (a concept she finds vulgar) to retain her house and her life. And so, in 1961, a reluctant Travers travels to California to meet with the Disney team.

She is very clear that she has to have the final say in the script of the movie, and is determined not to compromise of any aspect of her characters or situations. She does not want to make the movie all fluff and no substance, which she suspects is Walt Disney's vision.

When the Sherman brothers, Robert (BJ Novak) and Richard (Jason Schwartzman), who are the composers of the music, and Don DaGradi (Bradley Whitford), the scriptwriter, greet her warmly, they have no idea what they have to put up with.

Although she is not too keen to make it a musical, the Sherman brothers win her over, but she pokes her nose into every line of the script, including the address that the house will be on, and, of course, the dialogues. She tells Walt Disney (Tom Hanks) that she wants every meeting recorded on tape, as she rejects idea after idea, and makes clear her unhappiness about the production design.

Before the two weeks are up, however, she gets into an argument with Disney. Which is when Disney finally understands where she is coming from. He realizes that Mary Poppins is not a figment of her imagination - she is somebody very important in her past life.

The screenplay oscillates between Helen's childhood and her interactions with the Disney team. Mrs. Travers, as she insists on being addressed as, is not friendly, and sometimes downright rude. The writers of the movie juxtapose her hoity toity ways against the informality of the Americans, and how she is softened, bit by bit.

Bordering on the maudlin at times, the story still manages to bring a lump to your throat, although you never really empathise with Mrs Travers. To bring in a bit of humane behaviour, the makers have placed a driver, Ralph (Paul Giamatti), with whom she eventually lets down her guard.

The writers could have made the script reading sessions a bit more technical, but then, it would not have worked for all audiences. Also, the Americans are all extremely nice people, which is surreal - Robert shows a bit of spunk by defying her, but that track is not followed through - it would have made for some interesting viewing.

Walt Disney himself is on a mission to tame the shrew, and that takes away from the real person that Mrs. Travers was - it is not possible for a person who writes such heartfelt children's books to be such a harridan. The interpersonal relations between Mrs Travers and the rest of the team at Disney is glossed over, without establishing anything more than her high-handed attitude.

Emma Thompson is at her element here. She is haughty, rude and vulnerable at the same time. Her depiction of Mrs. Travers is consistent, and never seems over the top, although some of the reactions seem a little extreme sometimes.

Tom Hanks is content to play Mr. Nice Guy, and he does it pretty well, but his character does not have a graph. Colin Farrell is not the ideal Travers Goff, but he manages to do his job. BJ Novak, Jason Schwartzman, Bradley Whitford and Ronan Vibert seem like props. Paul Giamatti is the quintessential humble subservient American, and he is convincing in the role, but he could have displayed more greys in the character of a man who has a miserable personal life.

The production design is impeccable, and that is not surprising, considering it is a Walt Disney production - each little detail is taken care of in portraying a period that was considered a boom phase for the studio. The costumes are not loud, and blend in perfectly with the production design.

The cinematography is subtle, and it distinguishes between the two periods that the movie deals with, in terms of colours and shots. Although it is a lengthy movie, the editing seems crisp, with not one scene out of place.

Saving Mr. Banks - the title comes from the father in the Mary Poppins book - is a reconstruction of what transpired between filmmaker Walt Disney and author Mrs. Travers in the studio in California, and how their dialogues and interaction finally led to the hit film, Mary Poppins. Then again, it is much more than that. It is an attempt to understand the baggage of memories that haunt storytellers, and their reconciliation with the darkness within them, because, as Walt Disney says to Mrs Travers, "Because that is what we storytellers do. We restore order with imagination. We instil hope, again and again and again."
Share. Save. Connect.
Tweet
SAVING MR. BANKS SNAPSHOT 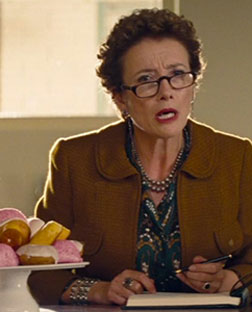 ADVERTISEMENT
This page was tagged for
Saving Mr. Banks english movie
Saving Mr. Banks reviews
release date
Emma Thompson, Tom Hanks
theatres list
Follow @fullhyderabad
Follow fullhyd.com on
About Hyderabad
The Hyderabad Community
Improve fullhyd.com
More
Our Other Local Guides
Our other sites
© Copyright 1999-2009 LRR Technologies (Hyderabad), Pvt Ltd. All rights reserved. fullhyd, fullhyderabad, Welcome To The Neighbourhood are trademarks of LRR Technologies (Hyderabad) Pvt Ltd. The textual, graphic, audio and audiovisual material in this site is protected by copyright law. You may not copy, distribute, or use this material except as necessary for your personal, non-commercial use. Any trademarks are the properties of their respective owners. More on Hyderabad, India. Jobs in Hyderabad.