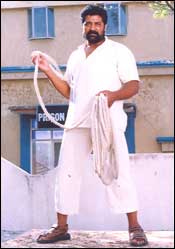 Mithun Verma / fullhyd.com
EDITOR RATING
3.0
Performances
Script
Music/Soundtrack
Visuals
NA
NA
NA
NA
Suggestions
Can watch again
NA
Good for kids
NA
Good for dates
NA
Wait to rent it
NA
Sometimes you just sense things are not right. Like, when you're parking your bike and the parking guy at the theater pats you on the shoulder proudly and salutes you, you just know something's not right. At other times you would think he's trying to pinch out a tip, but not just before entering a 'mass' movie. You know better.

Let's not debate who, after actually knowing better, would still venture into a movie where the parking guy salutes you for gallantry. Let's not debate that because we have other debates on our hand like the plot for this one.

Seshadri Naidu (Real Star Srihari) starts a restaurant where one Rotte, some Pappu and a glass of Majjiga cost only one rupee. The MLA of that area pays him a visit pleading Seshadri not to enter into politics. He would completely annihilate the economy of the country. But that's not the main reason. The MLA wants to save his own seat, because if Seshadri stood in the elections, he would have a landslide victory.

Not just landslides, Seshadri is also capable of earthquakes and volcanoes. Such is his personality. His physical strength in the first fight, when he barbarically throws three men into orbit, shows just what one rupee Rotis are capable of doing.

But even with such powers, he barely misuses them. For example, while breaking prison, when five men are charging towards him in a horizontal line, he doesn't wink at them or bite his lip seductively. He just stretches both his legs as far as they can go, jumps up in that position and propels himself towards the thugs. All of them die at the same time. Okay, the guy in the middle dies earlier.

But first, for the reason why he is in jail. Seshadri has this special-visioned sister, Annapurna. She gets hitched to the villain's son, who's pretending to be nice and courteous. Both Seshadri and his sister have not seen Sylvester And Tweety, and they ignorantly fall for the trap.

The villain Jr. does all the despicable things to Annapurna: he doesn't just leave her after showing his acting skills; he also shows her some dancing skills. And she kills herself. Okay, actually, Jr. takes gross advantage of Annapurna's handicap.

Seshadri is now burning for revenge. That's real bad news for the villain Jr. And even worse news for the producer: he'll have to cough-up titanic proportions of cash for the fights. And after the hero and the thugs finish all the food on the sets, he'll have to invest into string-technology for the fight sequences for the movie as well. It's a tough job being a producer.

But it's even tougher being a scriptwriter. Have you ever tried writing 3 words repeatedly, and making a movie out of it? Ask George Lucas. It can be extremely frustrating… for the audience. Comedy-tragedy-action. Keep repeating till you're sure you would evaporate if it happens again. Repeat it 50 more times. Evaporate. You have a winner!

For the comedy, we have Ali and a sloshed Srihari - both left dangling onto some asinine humor. For the tragedy, we have a few bombings, a couple of thousand hackings, a painful suicide and an even painful heroine.

The action part is probably the reason you can venture into the theater. Srihari does all the stunts himself. He really seems to have some superhuman strength. But unfortunately, you don't have the superhuman patience.

The four villains don't, either. They say they're sorry to have bothered Seshadri and decide to confess their crimes and settle happily in a cell. They had planned on toppling the government, which Seshadri intellectually foiled. They thought their son would take the revenge, but all he took was our time.

Overall, Seshadri Naidu is crooked, pseudo-flaky and hollow. And Srihari, the real star, realistically tried his best to not make it look that way.
Share. Save. Connect.
Tweet
SESHADRI NAIDU SNAPSHOT