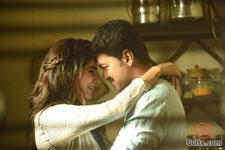 T J Reddy / fullhyd.com
EDITOR RATING
5.0
Performances
Script
Music/Soundtrack
Visuals
6.0
5.0
4.0
5.0
Suggestions
Can watch again
No
Good for kids
No
Good for dates
Yes
Wait for OTT
Yes
Award-winning film critic Baradwaj Rangan once wrote an interesting piece. He made a claim that almost every Indian film he viewed and reviewed in the modern age was - in one way or the other - derived from the massive film catalogue of Kamal Hassan. Reading though his reasoning for said broad statement, I was mesmerized by how many of our current filmmakers indeed appeared influenced by the man's (Hassan) oeuvre.

Watching Adhirindi initially reminded me of the recent Jr NTR release Jai Lava Kusa which in turn reminded me of Kamal Hassan's own Apoorva Sahodarargal. Like Apoorva Sahodarargal did, Adhirindi gives you three takes on the same actor, and a revenge plot, but what it lacks in nuance it more than makes up for in broad political statements and loud fight scenes which are meant to appeal to both ends of the socio-economic spectrum.

But let's not get ahead of ourselves by discussing the movie's themes just yet. Instead let's begin with the plot.

Dr. Maaran (Vijay) attends an award ceremony honouring his humanitarian work as the "5-rupee doctor". He wears a shirt and veshti that could just as well be featured on a Ramraj ad. After picking up his award, he rebukes the advances of an "evil" doctor Arjun Zachariah (Hareesh Peradi), who is in the profession only for the money and not the service (Twister reference there for all three of you who get it).

One obligatory romance with Anu Pallavi (Kajal) later, we understand how Maaran can fund his 5-rupee clinic. He makes money appear from thin air, apparently. He is a magician. An awestruck Kajal asks no questions, and attends his sold-out opera-house-filling performance. The show has Arjun die in what seems like an incident of magic-gone-wrong, but is actually a murder.

Brilliant doctor, mesmerizing magician, lover and cold-blooded murderer? How does Maaran find the time to do all this when I can't even write two reviews a day? Is it all him or is there something or someone else at play here?

While you're asking these questions, the film quickly reveals that the magician is not Maaran but his brother who avenges him and the many civilians who die of medical negligence, by kidnapping the medical professionals responsible for it - a man with nothing but adrenaline and tears coursing through his veins, Vetri (Vijay) - a spitting image of Maaran.

The film leaves the audience with more questions post this reveal, such as why does he do what he does, why does the film keep showing spliced flashbacks of Vijay wrestling, and why is Samantha in the movie. The movie answers all these questions except for that last one in the second half - the good half.

Adhirindi is a film constantly pegged back by its political ambitions. From the introductory scene which has Vijay doing push-ups to the MGR workout album to him beating GST's face to a pulp to him informing the audience of how public healthcare can be improved, the movie is an out-and-out political statement. But while the statement itself carries no malice, a movie - above all things - needs to be a movie, and that's where this one fails.

The parts where this film lets itself down are the script and the character departments in the first half. As it is, sans rousing speeches and overly idealistic world views, the first half's 1 murder, 1 returning Vadivelu, 2 brothers, 2 actresses, 2 romances, 3 songs, 4 kidnappings and a slew of Now You See Me-inspired magic tricks seem toothless and bland. I can make a case for how everything apart from 10 minutes of the first half can be eliminated from the movie to make this a leaner, meaner and harder hitting final product.

Transitioning from the distinction-free brothers to a focused figurehead of a village in the second half is the exact dose of adrenaline this film and its lead needed. Vijay is given a naïve yet deeply emotional character (his strengths) to sink his teeth into, with Nithya Menon playing off him to great effect. Atlee's skill at developing tight bonds between his characters with a dollop of humour, while predictable, is quite welcome. The movie quickly builds itself a narrative crux while also introducing a bad guy with panache and a fitting name, Daniel Arokiaraj (S J Suryah). Bolstered by Vijay's stern resolve and Suryah's hamming his material up to a tee, the movie cleverly intertwines the political with the human.

Vijay is single-handedly tasked with carrying his overtly political vehicle which gives his audience no notable songs to hum on their way out of the theatre but gives them a shiny new moniker to address him by. While the glorious mass-y shots are meant to capture the many faces and emotions of the three Vijays and his co-stars reacting to occurrences in the world around them, all except the OG Vijay-Menon duo are more reactive than proactive.

Owing to these issues with pacing, music and character development, Atlee - a former student of ace director Shankar - stumbles and fumbles on his way to creating a glorious portrait for his leading man. Unlike highly effective films a la Indian and Aparichitudu, moderately thought-provoking films like Tagore or even ironically enjoyable fares such as Indra, Adhirindi finds itself in the purgatory of mediocrity for its insistence at being a political statement first and a good film later.

Universal healthcare is a good theme for a movie, but the argument for said care needs to be a more nuanced one in the story being told. Adhirindi is a film that fails to address the root of the problem and the deep-rooted reservations that prevent obvious solutions, choosing instead to make its point by means of a revenge killing.

Prakash Raj's words to Kota Srinivas Rao from Athadu still ring in my ears: "Mr Baji Reddy, if you kill Siva Reddy, you are next line in to become the CM, but you are also a criminal. How did you miss this piece of logic?" Someone needs to find to Prakash Raj and ask him to tell Atlee that he bypassed logic, too.
Share. Save. Connect.
Tweet
MERSAL SNAPSHOT 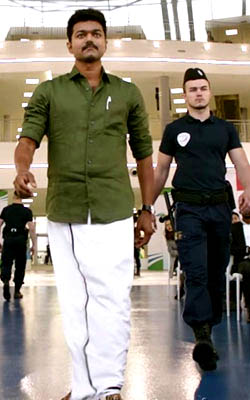 ADVERTISEMENT
This page was tagged for
mersal opera magic
Mersal tamil movie
Mersal reviews
release date
Vijay, Samantha Ruth Prabhu
Follow @fullhyderabad
Follow fullhyd.com on
About Hyderabad
The Hyderabad Community
Improve fullhyd.com
More
Our Other Local Guides
Our other sites
© Copyright 1999-2009 LRR Technologies (Hyderabad), Pvt Ltd. All rights reserved. fullhyd, fullhyderabad, Welcome To The Neighbourhood are trademarks of LRR Technologies (Hyderabad) Pvt Ltd. The textual, graphic, audio and audiovisual material in this site is protected by copyright law. You may not copy, distribute, or use this material except as necessary for your personal, non-commercial use. Any trademarks are the properties of their respective owners. More on Hyderabad, India. Jobs in Hyderabad.