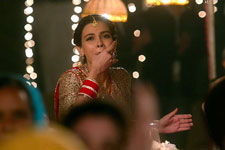 Jaiwantika Dutta-Dhupkar / fullhyd.com
EDITOR RATING
3.0
Performances
Script
Music/Soundtrack
Visuals
6.0
2.0
3.0
4.0
Suggestions
Can watch again
No
Good for kids
No
Good for dates
No
Wait for OTT
Yes
Happy Bhaag Jayegi would have been so much fun in the '80s. It relives an old-school idea of romance that honestly doesn't have much in common with reality but has so much potential. But that's all HBJ remains eventually: unfulfilled potential. You'd imagine a love story about a runaway girl and three chaps would be enough fuel interest for three hours, but you're wrong right there.

Happy (Diana Penty) is the high-strung PYT who has a thing going with the college dreamer-musician Guddu (Ali Fazal). She's however engaged to be married to the local goonda corporator Bagga (Jimmy Shergil in a Tanu Weds Manu-reprisal), and so hatches a plan to elope. Unfortunately that plan goes awry, and she ends up in Lahore, where she meets Bilal Ahmed (Abhay Deol).

As a runaway tale, Happy Bhaag Jayegi is not much fun - Happy doesn't have enough adventures, and spends a lot of time sitting at home. You'd wonder why HBJ was projected as the story of a girl's adventures when it isn't woman-oriented in any way in the first place. And using women's bodies to make political statements has become de rigueur: here the heroine is used to symbolize the Indo-Pak partition in rather grotesque fashion.

HBJ has also been projected as a romance, but that is mostly only the posters. For a film with three heroes, you'd expect much more of the mush, but it really offers zilch. Guddu and Happy spend most of their time apart, and their time together is either tragic or cheesy. Bilal and Happy don't actually have any romance going on, but later on we're told that he has the hots for her - restrained, much? Bagga and Happy seem to have some kind of camaraderie in the beginning, but it evolves into something very negative as the film progresses, you are not sure how. Meh.

So basically, there's no romance in HBJ, and not much adventure either. And for viewers still looking forward to films depicting small-town life despite the surfeit, for how endearing they can be despite of the depiction of lawlessness, corruption and an apparent gun-toting mafia rule, HBJ again does nothing.

Neither does the change of scenery to Pakistan - too many scenes are shot indoors, and there's one silly sequence in a park that could have been shot anywhere at all. And for all its ballyhoo about Urdu, what with actors taking crash courses to learn the language and entire scenes on Urdu vocabulary in the film, the movie doesn't have enough characters speaking the language in the film. Even the Pakistani characters make do with Hindi, and it seems quite ironical on screen. Indeed, the Pakistani element is pointless and adds no special value to the narrative.

There's also this strange vintage feel to HBJ - and it's not just in the sets and art direction, but also in the dialogues and costumes, in the odd way the characters behave, the entire film. Penty stops short of shouting "Chal, Dhanno!", but is a regular Basanti in every way. For a film shot in this day and age, she is never shown to have any friends, and never social networks or sends email. All the characters live some kind of capsulated life, and that is hilarious in itself. There are some unintentionally funny scenes in which Bilal Ahmed uses his influence to get a Pakistani policeman to come to India and investigate Guddu's whereabouts. A lot has been made possible in the filmmaker's imagination, so thank God HBG is a comedy.

The performances help the film. Diana Penty picks up from where she left off a few years ago in Cocktail, and while she cannot pull off the role of a perky and pert countryside girl the way some others may have been able to, you certainly can't fault her for not trying. And both Ali Zafar, who plays the rather weak, if endearing, Indian lover Guddu, and Abhay Deol, the noble and helpful Bilal Ahmed who's friend-zoned in Pakistan, turn in creditable performances.

The cinematography by Saurabh Goswami saves the film, which has interesting visuals. The movie is well-edited as well (Ninad Khanolkar), and that partially lifts it out of its drab writing. Nevertheless, HBJ is still a small-town saga lacking in novelty, romance and adventure, and less than a riveting watch. You can safely skip this one.
Share. Save. Connect.
Tweet
HAPPY BHAG JAYEGI SNAPSHOT

ADVERTISEMENT
This page was tagged for
Happy Bhag Jayegi hindi movie
Happy Bhag Jayegi reviews
release date
Diana Penty, Ali Fazal
theatres list
Follow @fullhyderabad
Follow fullhyd.com on
About Hyderabad
The Hyderabad Community
Improve fullhyd.com
More
Our Other Local Guides
Our other sites
© Copyright 1999-2009 LRR Technologies (Hyderabad), Pvt Ltd. All rights reserved. fullhyd, fullhyderabad, Welcome To The Neighbourhood are trademarks of LRR Technologies (Hyderabad) Pvt Ltd. The textual, graphic, audio and audiovisual material in this site is protected by copyright law. You may not copy, distribute, or use this material except as necessary for your personal, non-commercial use. Any trademarks are the properties of their respective owners. More on Hyderabad, India. Jobs in Hyderabad.