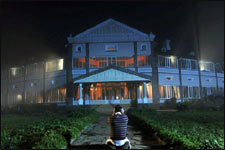 Nupur Barua / fullhyd.com
EDITOR RATING
3.0
Performances
Script
Music/Soundtrack
Visuals
3.0
3.0
3.0
4.0
Suggestions
Can watch again
No
Good for kids
No
Good for dates
No
Wait for OTT
No
Haunted is the first Indian horror movie shot in stereoscopic 3D, and, whether you like it or not, history has been created, by Vikram Bhatt, no less.

Rehaan (Mahaakshay) is in Ooty, on behalf of his father, to salvage a brokerage deal for Glen Manor, an old property. On his way to this estate (accompanied by some piano music, a la Dracula), he stops at Guru Da Dhaba, where he sees the owner kicking out an old tramp (Sanjay Sharma). Rehaan is curious enough to chat with the tramp later, and is perplexed (an emotion that Mahaakshay can portray brilliantly, throughout the movie) when the old man says, somewhat cryptically, "You can do it, you are the only one who will do it."

Rehaan visits the estate caretaker's body in the morgue, discovers that the other estate workers want to quit, and with perplexed face intact, finally reaches Glen Manor. Within 10 minutes of his arrival, he is made aware of the strange noises - which include doors banging, table lamps breaking, and books falling off shelves - that are the pre-requisite of every haunted house.

Instead of running, Rehaan decides to find out for himself what happened in this house. Why, you ask? Because he discovers a photograph of a young girl in a hat. He is intrigued, to say the least, and perplexed. He discovers hand prints on the door, a severed head in the laundry basket, and, most importantly, a letter from the young girl, in a book that has been throwing itself on the floor every day. The spirit of this girl, Meera (Tia Bajpai), has been imprisoned in this house for 80 years (since 1936, but 80 sounds better than 75).

And thus begins Rehaanâ€™s journey to liberate the spirit. He scowls, grimaces, plays the piano, dances, and travels through time (taking his cell phone with him), and even makes an attempt at comedy, looking perplexed the whole time.

The costumes in 1936 are an eye-sore. Nobody wore clothes from Lokhandwala then, and here's hoping that the movie does not become a reference for period film aficionados. The music director puts together some unimpressive background music, complete with pianos and organs (horror movie, remember?), and the singers sound jaded as they belt out some forgettable numbers.

Production design is the villain here, with modernized vintage cars and DSLR photographs (blown-up, sepia-toned, but not photoshopped enough to make them look old), and atrocious 'ghost' make-up.

Mahaakshay has not inherited his father's acting genes, but he looks more presentable than Mimoh. He lugs across the screen in his tight, short pullovers, and looks bewildered, even when he breaks into one of his strange sprints. Tia has nothing much to do but shriek, and speak in English at times, with a rather strange accent. Achint Kaur, Mohan Kapur and Prachi Shah (in a cameo as Mrs. Stevens) are wide-eyed and lackluster. Sanjay Sharma attempts to imitate Raghuvir Yadav, and fails.

Whether you want to watch this bewildering movie or not, here are a few facts that you must know (courtesy Haunted):

ADVERTISEMENT
This page was tagged for
Haunted hindi movie
Haunted reviews
release date
Mahaakshay, Tia Bajpai
theatres list
Follow @fullhyderabad
Follow fullhyd.com on
About Hyderabad
The Hyderabad Community
Improve fullhyd.com
More
Our Other Local Guides
Our other sites
© Copyright 1999-2009 LRR Technologies (Hyderabad), Pvt Ltd. All rights reserved. fullhyd, fullhyderabad, Welcome To The Neighbourhood are trademarks of LRR Technologies (Hyderabad) Pvt Ltd. The textual, graphic, audio and audiovisual material in this site is protected by copyright law. You may not copy, distribute, or use this material except as necessary for your personal, non-commercial use. Any trademarks are the properties of their respective owners. More on Hyderabad, India. Jobs in Hyderabad.