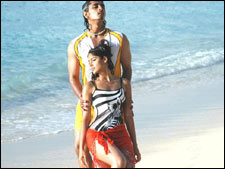 EDITOR RATING
5.0
Performances
Script
Music/Soundtrack
Visuals
NA
NA
NA
NA
Suggestions
Can watch again
NA
Good for kids
NA
Good for dates
NA
Wait for OTT
NA
It’s a pity when a movie that appears like it holds so much promise and potential finally fizzles out into just another statistic. Fortunately for Aata, it doesn’t hold any promise or potential whatsoever, and so you don’t have to feel any pity for it. It’s just another showcase for Tollywood’s find of the decade – Ileana’s… well, let’s say acting talent. And it does it so unabashedly, you are glad that there are at least some movies that fearlessly stand for what they believe in.

Srikrishna (Siddharth) grows up like most movie heroes – without any decent education, and quite proud of that. Being the son of a cinema projector operator (Sarath Babu), he watches just about every Telugu movie ever released, and that has the natural effect on him – he comes up with ridiculous ideas all the time to get out of trouble, that work only in Telugu movies.

Satyavati (Ileana) is running away from Vicky (Munna), the son of the home minister (Jayaprakash Reddy) – Vicky’s after her blood since she’s raised a storm over his raping and murdering her friend after a party, landing him in court. She runs into Srikrishna somewhere in interior Andhra.

It’s love at first sight for Srikrishna, and he starts helping her in escaping from the goons (and cops) chasing her. Protecting a woman from goons has positive side-effects and negative side-effects. Negative side-effects mostly involve you getting killed. Positive side-effects involve insurance money. Okay, maybe we are being overly pessimistic. Only, optimism involves thinking that a handful of marbles can stop an army of a hundred goons dead in their tracks. No, don’t even ask.

Indeed, the main problem with Aata is the ridiculous script. Yes, movies are make-believe, but that doesn’t mean we went to watch the Tom & Jerry show. The whole second half has a plot that careens on the thin line between movie script and creative bankruptcy. For a movie that showcases its hero as an ideas man rather than as a superhero, there’s not a single wow idea – almost everything is unrealistic, concidence or unexplained. If there were a mathematical formula that correlated the cumulative improbability of the events in a movie to how much audiences will like it, well, you really wouldn’t need it in this case.

The first half has nothing in it, and the second needs you to be credulous rather than judgemental. And both of them need you to be male. Yes, there’s Ileana, pretty in-your-face with her famous …er, acting talent. And it is not just the songs, either – the references are all over the place. It’s good that Siddharth has a talent for acting – he manages to pass off the goofy grins as only what the script demands.

There isn’t enough comedy to make you forget your sins for a while either. Brahmanandam looks like he overdoes it in the first half in a mostly cameo role, but that’s because the lines are sad. Sunil’s comedy is loud and unimaginative – again, due to poor writing. The music by Devisri Prasad has 1-2 good numbers, but they are likely to go the same way as the movie itself.

See Aata full details
AATA USER REVIEWS
1 - 15 OF 16 COMMENTS  |  NEXT  |  LAST
POSITIVE  |  NEGATIVE |  NEWEST  |  OLDEST  |  MOST HELPFUL  |  LEAST HELPFUL
USER RATING
4.3
151 USERS
Performances
Script
Music/Soundtrack
Visuals
NA
NA
NA
NA
Can watch again - NA
Good for kids - NA
Good for dates - NA
Wait for OTT - NA
Rajesh Rajesh on 4th Jul 2007, 10:02am | Permalink
wast
RATING
2
Rupa Sastry on 5th Jun 2007, 1:57pm | Permalink
A very bad movie. Nothing but skin shows and stupid and funy incidents.
I wonder will we ever come up with good story lines, or just keep audi looking at those brown skins.
RATING
2
Chalam on 20th May 2007, 3:13am | Permalink
Surprisingly you (fullhyd) got this one right!! A good review. I guess this time some one from fullhyd actually watched the movie and wrote the review unlike for some other movies which are crap like auto-generated at fullhyd!

The movie on the other hand bullshits a lot. The other day I read somewhere that the hero said this is his best movie or some shit. Excuse me?

RATING
2
Sri on 18th May 2007, 6:45pm | Permalink
The quality of reviews at fullhyd has not been the same as it used to be. I guess one is trying too hard to be hilarious.
RATING
4
Praveen on 14th May 2007, 9:48am | Permalink
waste of time.
RATING
4
S S on 13th May 2007, 2:17pm | Permalink
I just noticed that those who gave this movie 1 or 2 stars wrote better English than those who gave 4 or 5. Mass / class divide ?? ;)
RATING
2
Man on 12th May 2007, 4:23pm | Permalink
after DHEE ,,this is a gr8 entertainer.,.,.,.,wat is this shit review
ippudu vachina edupugottu movies (AMAV,MUNNA,DESAMUDURU)kanna this is more best....
RATING
10
Sss on 12th May 2007, 2:05pm | Permalink
just watch with clean view,....
RATING
10
Siddarth Narayan on 11th May 2007, 4:32pm | Permalink
Believe me, I am the same guy who acted in this movie. I just came across this site and though I could vent my anger atleast here. I did not want to do this role right from the day I heard this script. But I could not reject MS Raju garu since he was the one who gave me a break with NVNV. I believed he could make this one into atleast a moderate film. But the output is worse than what it looked like in the script. I am so sorry for you viewers.
RATING
2
Kris Ray on 11th May 2007, 3:49pm | Permalink
I give 5 stars for the Review and 4 stars for the Cinematography, 3 stars for Siddhartha for his belief in his role, 2 stars for the Average Music, 1 star for the flop director, 0 stars for Ileana's acting skills and -1 star for MS Raju's Story-Writing skills.
RATING
10
Prasad on 11th May 2007, 11:36am | Permalink
nice movie...
RATING
4
Raj K on 11th May 2007, 11:01am | Permalink
Cinematography: Chota K NaiduExcellent. hilarious Comedy,Nice songs except last song. Good Direction.Rich Choreography.Improved action of ileana and sidardh.
RATING
10
K Manoj on 10th May 2007, 8:41pm | Permalink
Come with a new script, dont do the same crap again and again
RATING
4
Ram Kumar on 10th May 2007, 8:09pm | Permalink
please dont see this movie, its waste of time. m.s.raju garu please take new ideas from new people not from the same old team.
RATING
2
Priyanka Rao on 10th May 2007, 6:15pm | Permalink
Come on MS Raju, grow up. Do you think we are a bunch of dumb idiots who watch every idiotic movie you make?
RATING
2
1 - 15 OF 16 COMMENTS  |  NEXT  |  LAST
LEAVE A COMMENT
fullhyd.com has 700,000+ monthly visits. Tell Hyderabad what you feel about Aata!
MORE MOVIES
Latest Reviews
Don't Worry Darling
Vikram Vedha
Ponniyin Selvan - 1
Naane Varuvean
Nene Vasthunna
more
Krishna Vrinda Vihari
Saakini Daakini
Where the Crawdads Sing
Everything Everywhere All At...
Aa Ammayi Gurinchi Meeku Che...
Brahmastra: Part One - Shiva
Oke Oka Jeevitham
Brahmastra: Part One - Shiva
Ranga Ranga Vaibhavanga
First Day, First Show
Contemporary Reviews
Veduka
Andhrawala
Dhamaal
Chain Kulii Ki Main Kulii
Anaconda 2 (Telugu)
more
Fool N Final
Hungama In Dubai
Buddha Mar Gaya
Kaam Shastra
Santhosham
Vallabha
Open Season
300 - The Movie
The Reaping
Random Reviews
Paagalpan
Yeh Teraa Ghar Yeh Meraa Gha...
Bollywood Hollywood (English...
Tauba Tauba
Chedugudu
more
Aakasa Ramanna
Haunted - 3D (Hindi)
3 (Tamil)
Iron Man 3 (Telugu)
Raja Rani
Maga Maharaju
Ben-Hur
B.Tech Babulu
Yesterday
Laal Singh Chaddha
SEARCH MOVIES
Dissatisfied with the results? Report a problem or error, or add a listing.
ADVERTISEMENT
SHOUTBOX!
{{todo.name}}
{{todo.date}}
[
ip{{todo.ip}}
]
{{ todo.summary }}... expand »
{{ todo.text }} « collapse
First  |  Prev  |   1   2  3  {{current_page-1}}  {{current_page}}  {{current_page+1}}  {{last_page-2}}  {{last_page-1}}  {{last_page}}   |  Next  |  Last
{{todos[0].name}}

ADVERTISEMENT
This page was tagged for
Aata (2007)
aata 2019 telugu movie review
aata movie review in telugu
Aata telugu movie
Aata reviews
Follow @fullhyderabad
Follow fullhyd.com on
About Hyderabad
The Hyderabad Community
Improve fullhyd.com
More
Our Other Local Guides
Our other sites
© Copyright 1999-2009 LRR Technologies (Hyderabad), Pvt Ltd. All rights reserved. fullhyd, fullhyderabad, Welcome To The Neighbourhood are trademarks of LRR Technologies (Hyderabad) Pvt Ltd. The textual, graphic, audio and audiovisual material in this site is protected by copyright law. You may not copy, distribute, or use this material except as necessary for your personal, non-commercial use. Any trademarks are the properties of their respective owners. More on Hyderabad, India. Jobs in Hyderabad.