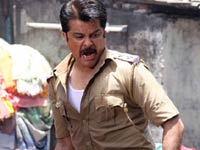 Ravi Kandala / fullhyd.com
EDITOR RATING
3.0
Performances
Script
Music/Soundtrack
Visuals
3.0
3.0
3.0
6.0
Suggestions
Can watch again
No
Good for kids
No
Good for dates
No
Wait for OTT
No
The censor board in India is weird, to say the least. It will not allow something like The Dirty Picture to hit the telly without three thousand cuts, but will allow something like Shootout At Wadala to be shown in theatres without any cuts, knowing well that its A certificate will not deter several impressionable minds from seeing it.

If not for the amount of profanity and violence depicted, Shootout is a film that deserves to be banned for the sheer amount of objectification of women that the movie blatantly advocates. The only women seen in the movie are rape victims, item girls, prostitutes or girlfriends who are used to "warm beds", in the dialogue writers parlance. Literally every woman seen in the movie is only there to help John perfect his pelvic thrusts.

The film is about the rise of Manya Surve, one of the most fearsome gangsters of Mumbai in the bygone era. John "beefcake-single-expression-powerless-voice" Abraham plays Manohar Surve, a student who is wrongly arrested by a corrupt inspector. Once in jail, he decides that his life has anyway gone to the dogs, and turns into a hardened criminal.

He escapes from jail after murdering a fellow prisoner, and tries to join a criminal empire run by two brothers played by Manoj Bajpayee and Sonu Sood. He fails, and decides to start his own gang.

For the rest of the movie, he then goes around with his gang of exactly four others, singing songs, dancing to item songs, enacting a couple of sex scenes, mouthing punchlines, and killing people before being killed.

In parallel, there is a cop team - played by Anil Kapoor, Ronit Roy and Mahesh Manjrekar - that is out to end crime in Mumbai. Their preferred mode of operation seems to be uttering profanity-ridden or utterly ridiculous punchlines. One of Anil Kapoor's lines roughly means - "there is so much iron in the bullets of the Mumbai police that if I shoot you with one you will not have iron deficiency for the rest of your life". We wouldn't be surprised if lines like these led to criminals killing themselves.

The entire 150+ minute duration of the movie is an endless procession of gore and abuse. Sanjay Gupta, the man with the Tarantino hangover, continues copying Tarantino's style without ever getting the essence behind it. This is a story that we've seen multiple times, and the entire "inspired by true story" claim of the director rings false.

The screenplay and editing are beyond comprehension. Sample this sequence - Manya kills a major character, goes to the dead man's home and challenges his brother, goes to a cowboy bar and dances with Sophie Chowdary, goes home and has sex with his girlfriend, and then the dead man's brother finds out about his dead brother, and revenge is planned. The impact of the actual death is so diluted in the audience's minds that it is quite difficult to get involved in the plot for revenge. Many other sequences like these kill the mood of the movie.

Acting-wise, except for the leads John and Kangna, everyone else does a good job. John cannot emote, and the usually reliable Kangna Ranaut seems to have no interest in the proceedings. There are several actors, including Tusshar Kapoor and Jackie Shroff, and not many get significant roles.

The item songs are jarring and vulgar, and the other weird song between Manya and his gang needs to be forgotten immediately. Sanjay Gupta being Sanjay Gupta, the cinematography is smart and the recreation of 1970's Mumbai is topnotch.

Sanjay Gupta also seems to blatantly promote the notion that the police department is responsible for creating criminals via its fake encounters. The statistics that he chooses to show at the end about "fake" encounters are proof of this. Clearly, this is a man who has no responsibility towards either the film industry or the paying public.

Shootout at Wadala must've been censored by Gandhiji's three monkeys - whoever was censoring it shut their eyes, ears and mouths while watching it. All the others amongst us who can see, hear, speak and understand evil need to stay away. In these times, when we keep talking about changing the way we show women on screen, graphic rape scenes are definitely not what we need.
Share. Save. Connect.
Tweet
SHOOTOUT AT WADALA SNAPSHOT 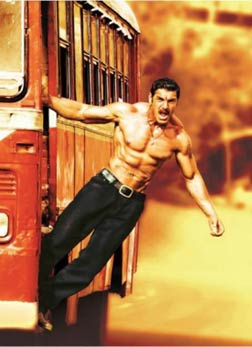 ADVERTISEMENT
This page was tagged for
shootout at wadala movie in hindi dubbed
hindi movies shootout at wadala
Shootout At Wadala Full Movie language:en
shootout at kandala
Shootout At Wadala hindi movie
Follow @fullhyderabad
Follow fullhyd.com on
About Hyderabad
The Hyderabad Community
Improve fullhyd.com
More
Our Other Local Guides
Our other sites
© Copyright 1999-2009 LRR Technologies (Hyderabad), Pvt Ltd. All rights reserved. fullhyd, fullhyderabad, Welcome To The Neighbourhood are trademarks of LRR Technologies (Hyderabad) Pvt Ltd. The textual, graphic, audio and audiovisual material in this site is protected by copyright law. You may not copy, distribute, or use this material except as necessary for your personal, non-commercial use. Any trademarks are the properties of their respective owners. More on Hyderabad, India. Jobs in Hyderabad.