Shall We Dance Review 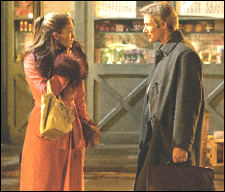 Priyanka Pulla / fullhyd.com
EDITOR RATING
7.0
Performances
Script
Music/Soundtrack
Visuals
NA
NA
NA
NA
Suggestions
Can watch again
NA
Good for kids
NA
Good for dates
NA
Wait to rent it
NA
Shall We Dance is an achievement in the number of genres it spans and how well it captures the essence of each. Romance, drama and comedy are all present in equal measure, almost in parallel. A near perfect movie, it has a storyline that doesn't really aim for a gripping end, yet holds your mind every second with its laughs, 'perfect as Cinderella' ball-dancing sequences and sprightly comedy.

The film is the story of John Clark (Gere), who is going through suspiciously andropausal symptoms, a sort of a midlife crisis that leaves him inexplicably bored with his idyllic life. His wife Beverly (Susan Sarandon of withered hands, yet a strikingly beautiful and radiant face), teenage kids and a no-problem job as an estate lawyer don't excite him even the bare-minimum anymore. And he is struggling quietly with it, ashamed to admit it to his wife because there is no explaining to her without sounding like it's her fault.

The wonderful part of the movie is that there is ambiguity about the characters' respective drives and motivations. Just like in real life. You never know for sure if John got down along his subway route and entered the dance class because he was attracted to the beautiful Paulina (Lopez) in the dance-school's window. Or whether it was the dancing itself that promised a means of reanimating his life. Or whether it was an impulsive and spur-of-the-moment decision.

Because later when Paulina tells him to leave if all he is interested in from the class is her, he looks upset and comes back with a renewed desire to master ball-room dancing.

You never know, because, to the credit of the movie, no one in real life ever knows. Something hazy motivates us, and it's often a sum of a hundred different things. It's this hazy, unpresumptuous feel of the movie that wins you over.

What follow next are a dozen mouthwatering sequences of salsa, waltz, rumba, tango, merengue and chacha that will absolutely pamper the romantic in you! Each sequence is a drunken dream to behold. Whether Lopez or Gere, they confirm with your fantasies of ballroom dancing as well as a scene from any Disney fairy tale movie.

Well, John gets better and better at his waltzing, and he does all this clandestinely from his family. Beverly investigates 'cause she gets suspicious he is having an affair. And finds out about his curious new obsession. There are some memorable dialogues in the movie about the meaning of marriage, and when the confrontation with John happens, about why Beverly cannot forgive his having kept her completely out of it.

Jennifer Lopez unfortunately is very wooden, and has an expression of pure irritation on her face throughout the movie. Her dancing is gorgeous, but she never once shifts that constipated expression. Only in the last scene, when Paulina and John dance again, does she really look like she has come out of her hangover.

The story is about a reunion between Beverly and John, through dance. It's the kind that every woman would watch with limp wrists under her chin, sparkling eyes and a rainbow of emotions in her mind. Guys would dig it too, like they dig ballroom dancing - a fact that in the movie both John and his friend Link (played with immaculate hilarity by Stanley Tucci) try hotly to keep under wraps.

Do watch when in the mood for a blithe and effervescent romance. There are very few romances with a subtle 'take your permission before making you emotional' feel like this one has. And that makes it a definite no-miss.
Share. Save. Connect.
Tweet
SHALL WE DANCE SNAPSHOT

ADVERTISEMENT
This page was tagged for
Shall We Dance english movie
Shall We Dance reviews
release date
Richard Gere, Susan Sarandon
theatres list
Follow @fullhyderabad
Follow fullhyd.com on
About Hyderabad
The Hyderabad Community
Improve fullhyd.com
More
Our Other Local Guides
Our other sites
© Copyright 1999-2009 LRR Technologies (Hyderabad), Pvt Ltd. All rights reserved. fullhyd, fullhyderabad, Welcome To The Neighbourhood are trademarks of LRR Technologies (Hyderabad) Pvt Ltd. The textual, graphic, audio and audiovisual material in this site is protected by copyright law. You may not copy, distribute, or use this material except as necessary for your personal, non-commercial use. Any trademarks are the properties of their respective owners. More on Hyderabad, India. Jobs in Hyderabad.