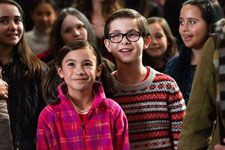 T J Reddy / fullhyd.com
EDITOR RATING
3.5
Performances
Script
Music/Soundtrack
Visuals
5.0
2.0
4.0
5.0
Suggestions
Can watch again
No
Good for kids
Yes
Good for dates
Yes
Wait to rent it
Yes
Daddy's Home 2, the newest holiday season cash-grab, follows a Christmas in the lives of Brad Whittaker (Will Ferrell) and Dusty Mayron (Mark Wahlberg). After the events of the first film, the two men have made peace and in turn have become a happy couple of co-dads. Because two dads are better than one, they are able to cut their wives (Linda Cardellini and Allesandra Ambrosio) out of the equation when it comes to planning parties and their kids' everyday lives.

Soon, they have their first Christmas as co-dads, and this involves inviting the extended family. Dusty's dad Kurt (Mel Gibson) and Brad's dad Don (John Lithgow) take some time off their schedules to meet their sons' families, and all of them decide to go out on a vacation to a snowy mountain where poorly-written hijinks ensue.

Daddy's Home 2 looks like a film that was made because the high-profile actors who took part in it wanted a vacation and also wanted to get paid while taking it. The movie's scenes seem to have been constructed around the itinerary of their trip. Each one of the events on their vacation checklist is accompanied by an unfunny skit or a bout of physical comedy that rarely adds anything to the plot as a whole. The plot winds itself up by the 30-minute mark as Brad teaches Dusty the lesson he needs to learn to adequately enjoy the holiday season. Unfortunately, you will be subject to 70 more minutes of the movie after that because they needed to make this feature length.

Most films are shot out-of-order to save on time and money. However, this film's scenes seem to be edited out of order as well because the filmmakers needed to quickly cash in their paychecks and take their families out on the same vacation the actors took while making it - a necessary effort to wash the taste of making this film out of their mouths.

What pull the movie down a notch from it being another one of your regular bad comedy sequels are its political undertones. Its decisions to paint a right-winged man as a trigger-happy man's man who advocates abusing women, and a left-winged man as a blubbering unformed mass of emotion are slightly troubling. This broad stereotyping also bleeds into the characterizations of the movie's female cast. They are either hot trophies to be won as a measure of masculinity or are bundles of insecure nerves that need validation from every person walking the face of the earth.

In the present day and age, stereotypes are only funny when used a launching pad for commentary. The film does have an example of this as part of a very engaging bowling scene. However, this instance of quality sticks out like an oasis in a desert and soon transforms to a mirage as the movie refuses to reach this level of quality ever again.

None of the much-acclaimed actors brings their A-material while participating in this film. They hit the emotional plateaus (I can't categorize them as peaks and valleys in good conscience) and sand traps exceedingly mechanically and with a distinct lack of heft.

Accompanying these mediocre performances and competently (and unambitiously) shot scenes to perfection are a series of flavour-of-the-week pop songs with some generous bastardization of classic rock numbers sprinkled for good measure. While this looks and sounds passable, you might want to check your eyes and ears as these scenes and songs might be floating right out of them as soon as they stop playing on your theatre's screen and Dolby-powered sound system.

At a juncture in the film, Will Ferrell says, "We all go to the movies and laugh together, cry together and have a great time with a room of people we don't know." I'd like to add to that: We get bored together as well most times. And when we do, the silence that underscores a bad comedy is as deafening as the riotous laughter that underlines a good one.
Share. Save. Connect.
Tweet
DADDY'S HOME 2 SNAPSHOT 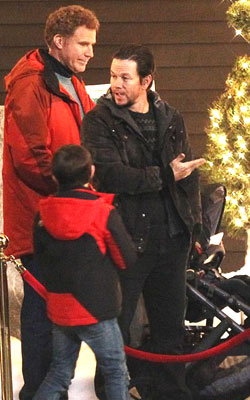 ADVERTISEMENT
This page was tagged for
Daddy's Home 2 english movie
Daddy's Home 2 reviews
release date
Will Ferrell, Mark Wahlberg
theatres list
Follow @fullhyderabad
Follow fullhyd.com on
About Hyderabad
The Hyderabad Community
Improve fullhyd.com
More
Our Other Local Guides
Our other sites
© Copyright 1999-2009 LRR Technologies (Hyderabad), Pvt Ltd. All rights reserved. fullhyd, fullhyderabad, Welcome To The Neighbourhood are trademarks of LRR Technologies (Hyderabad) Pvt Ltd. The textual, graphic, audio and audiovisual material in this site is protected by copyright law. You may not copy, distribute, or use this material except as necessary for your personal, non-commercial use. Any trademarks are the properties of their respective owners. More on Hyderabad, India. Jobs in Hyderabad.