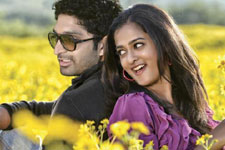 Ravi Kandala / fullhyd.com
EDITOR RATING
2.0
Performances
Script
Music/Soundtrack
Visuals
3.0
1.0
3.0
3.0
Suggestions
Can watch again
No
Good for kids
No
Good for dates
No
Wait for OTT
No
We'll assume that you've been following the hullabaloo about the Censor Board and the new guidelines it has imposed. If they're listening and are open to suggestions, we would like to give some of our own - first and foremost among them being that rich, moneyed guys who can afford to produce movies should not be allowed to play the hero, too. This will effectively mean that the board will ban all movies starring Sachiin Joshi (did we hear applause?).

Closer home, this will mean that movies starring Havish will also be banned. Which will not be a bad thing considering how bad his latest film is and how terrible he is in it. Ramleela, with its plagiarized title, is so insufferable that it made us want to walk out - quite a feat considering that we've sat through several movies starring the Sachiin Joshiis and Varun Sandeshs of the world.

Ramleela starts with Krish (Abhijeeth) seeing Sasya (Nandita) on a TV show and deciding that he wants to marry her. He immediately flies to India from the US, joins the gym where Sasya works as a Salsa instructor, reaches her home along with his parents, and gets married to her in two weeks. Once you have swallowed your disbelief, read on.

Sasya, on the first night, tells Krish that she hates the US, and would prefer living in Dubai or Singapore or somewhere closer. Krish immediately calls his boss in the US, asks him where else the firm's offices are located, learns that there's one in Malaysia, and immediately demands and gets a transfer to Malaysia. Swallowed this plot point, too? Now read on.

Once the couple reach Malaysia, Sasya disappears and tells Krish that she's gone off to meet her lover. Her past involved a love story where her policeman dad tortured the guy she loved so much that the guy went off to Malaysia, and her dad imprisoned her at home. When Krish's match came up, she found out what company he worked for, and married him because the company had a branch in Malaysia. She then chalked up a plan where she would talk him into seeking a transfer to Malaysia, escape there and find her lover.

This plan, with all its sound logic, actually succeeds. What else did you think? Now, a heartbroken Krish sets out for the honeymoon trip he'd planned, all alone. He meets Ram (Havish) along the way, and takes him along for the trip. Krish and Ram become best friends on the way. How these two stories intersect is easy to guess.

This tale (supposedly based on a true story) is padded with humor the kinds of which have not been seen ever in Telugu cinema. It involves Saptagiri playing Liver Boy (you read that right), a guy who drinks up liquor from other people's glasses, thus saving their livers. He has a split personality where he suddenly starts acting like a girl who's been betrayed by Ram. This track involves a spirit that is caught in a bottle and then released.

A second comedy track involves Ali playing a guy named Walking. He drinks petrol (you read that right, too) and runs faster than 180 kmph. He tells our heroes that a girl left him and that that caused him to start running like this!

Add to this mix loads of terrible acting from Havish - who's as expressive as the furniture in the room - Abhijeeth who lets his hair do the talking, and some supporting actors who play bit parts for no rhyme or reason. Ali and other senior actors including Bhanu Chander are given insignificant roles, and hardly make an impact.

The technical values are terrible - the scene where Ali is shown to be drinking petrol is such a terrible trick shot, it makes you want to barf. The songs are ho-hum, and feature bad voices.

Ramleela is a movie that needs to be avoided like the plague. And Havish's dad needs to stop indulging him. And we might just go watch Vishal's new movie in town - we're so sure that even that would be a couple notches better than this one!
Share. Save. Connect.
Tweet
RAM LEELA SNAPSHOT

ADVERTISEMENT
This page was tagged for
Ram Leela telugu movie
Ram Leela reviews
release date
Havish, Abijeeth Duddala
theatres list
Follow @fullhyderabad
Follow fullhyd.com on
About Hyderabad
The Hyderabad Community
Improve fullhyd.com
More
Our Other Local Guides
Our other sites
© Copyright 1999-2009 LRR Technologies (Hyderabad), Pvt Ltd. All rights reserved. fullhyd, fullhyderabad, Welcome To The Neighbourhood are trademarks of LRR Technologies (Hyderabad) Pvt Ltd. The textual, graphic, audio and audiovisual material in this site is protected by copyright law. You may not copy, distribute, or use this material except as necessary for your personal, non-commercial use. Any trademarks are the properties of their respective owners. More on Hyderabad, India. Jobs in Hyderabad.