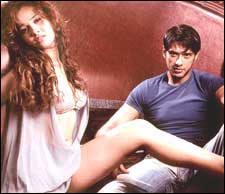 EDITOR RATING
6.0
Performances
Script
Music/Soundtrack
Visuals
NA
NA
NA
NA
Suggestions
Can watch again
NA
Good for kids
NA
Good for dates
NA
Wait for OTT
NA
Slivery visuals, crackerjack editing, pithy dialogue, spilling skin, ravaging music, a background score written in thundering hooves… James has all the key deliverables of a Ram Gopal Varma film. Indeed, RGV has shown how it’s possible to roll high-quality films off the assembly line by sticking to some basic ingredients – he actually calls his films factory products. Proving that presentation is everything, he makes you look forward to those special Fridays even when you know exactly what to expect.

James is no true-life story, of course. Nobody who has six-pack abs can have any true story. What instead James is, is a heavily slicked-up tale of the lone ranger who can beat up all the baddies and return home in time for dinner – a tale that was originally written in 1265 BC and has been narrated in Indian movies 10 times a year since. But you don’t care really – you’re here since you can watch an RGV film every day of the year, and on all the other days too if necessary. And he seldom disappoints.

Shanti Narayan (Zakir Hussain) rules Mumbai by force, with the loud reports of his men’s guns signing off any murmur of dissent. Into his world steps James (Mohit Ahlawat), a young immigrant from Goa who has no history, no fear and no acting skills. A rousing intro scene in a train later, you know that James can sure beat up ‘em roughnecks, and within the time specified.

His run-in into Shanti Narayan happens when, as a bouncer for a disco, he punches in the mug, Radhe Narayan (Shereveer), the brother of Shanti Narayan, for getting fresh with model/singer Nisha (Nisha Kothari). Nisha thinks he’s cool and promptly falls in love with him, but the same cannot be said of Radhe Narayan, who swears vile retribution. The hunt for James starts, and when his best friend is killed in the process, James himself turns hunter.

James decks several of Shanti Narayan’s prime goons, and the film proceeds to document the gristle and gore as the deuces get really wild now. Shanti Narayan decides that the only way to staunch the bleeding is to lay James down, and attacks Nisha pre-emptively. James rescues her and they are on the run together, but one man against an organized mafia doesn’t make for an even duel, and there are serious casualties.

James is certainly worth a watch for those with a thing for high production values. Made using bleeding edge technical skills, the film is visually quite slick, like all RGV films are. The script is non-existent – an unarmed superhero who defies all laws of everything to defeat an army of professional cutthroats – but the film makes up for it with standard-issue Varma effects.

Mohit Ahlawat says as little as possible to get by, and even that is clichéd – he’s basically eye-candy for the sizeable female teen crowds that are understandably choking on the promo visuals. Nisha Kothari shows as much as she legally can, and that must be half the reason the film has an A rating, but she doesn’t have the kind of oomph that some other RGV discoveries have, despite carrying the same diminutive frame. There’s simply no chemistry in the lead pair, one of the main reasons that the film comes out on the short end.

All other performances are worth the price of entry, and the music is the usual ritzy Factory Product fare. The payoff misfires mostly in the second half – in Shiva, Varma’s singular opus to date, the film showed enormous thought in how a man who challenged the world of bystanders evolved into a parallel mafia in himself. James just stays James – a man who for some reason can beat up 20 hooligans against all odds, and decides that’s the pinnacle of evolution. The second half is almost boring, with just a brief interlude by Rajpal Yadav lightening things up.

ADVERTISEMENT
This page was tagged for
james movie telugu
James (Telugu) telugu movie
James (Telugu) reviews
release date
Mohit Ahlawat, Nisha Kothari
Follow @fullhyderabad
Follow fullhyd.com on
About Hyderabad
The Hyderabad Community
Improve fullhyd.com
More
Our Other Local Guides
Our other sites
© Copyright 1999-2009 LRR Technologies (Hyderabad), Pvt Ltd. All rights reserved. fullhyd, fullhyderabad, Welcome To The Neighbourhood are trademarks of LRR Technologies (Hyderabad) Pvt Ltd. The textual, graphic, audio and audiovisual material in this site is protected by copyright law. You may not copy, distribute, or use this material except as necessary for your personal, non-commercial use. Any trademarks are the properties of their respective owners. More on Hyderabad, India. Jobs in Hyderabad.