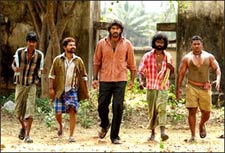 Ramya C / fullhyd.com
EDITOR RATING
3.5
Performances
Script
Music/Soundtrack
Visuals
6.0
3.0
6.0
7.0
Suggestions
Can watch again
No
Good for kids
No
Good for dates
Yes
Wait for OTT
Yes
Sarai Veerraju (Ajay) is uneducated, uncouth, and often beats up people after getting drunk. But he soon realizes the error of his ways - it's imprudent to rely on alcohol all the time, and so he starts beating people up even without being drunk.

A self-employed killer, Veerraju is particularly proficient at smashing people's faces by thulping 50kg stones on them. After a short (and successful) business trip to Dubai, Veerraju lands in Hyderabad, still on business. He arrives at Preeti's (Madhulika) home, feigning to be her boyfriend. Preeti falls in love with him, too - he is high in his height and she is low in her standards.

Veerraju however goes on his business of pounding, and is inevitably caught by Madhulika in the act. Like any girl who's just seen her boyfriend murder someone, she gets insecure about him spending time on someone other than her, and demands a full explanation. And the flashback comes frothing out.

It all starts in Narsipatnam, where Veerraju had all he wanted - friends, fights, liquor and the thrill of chasing girls. When Dhana Lakshmi (Ramya Nambeesan), his life-long-best-friend, is raped and killed by the villains who come to their village with a fraudulent chit-fund scheme aimed at looting the villagers, Veerraju swears revenge.

The main problem for the movie was summarized by the auto driver who dropped off this reviewer at the theatre today: "Sarai Veerraju choodadaniki potunnara?? Antha emundi danla?" What exactly the makers expect will draw the audiences, forget keeping them in their seats, is not covered in the movie.

There is also a lot of gore, with most of the stone-ramming scenes done with deliberate explicitness. While the narration manages to keep you interested initially, it quickly loses pace as interval approaches and rambles from then on.

It also seems like the director tries to woo all classes of audiences: family crowds with the Veerraju-Dhana Lakshmi sequences, college-goers with Madhulika, and children with the couple of kids' sequences. And where all else fails, there is Mumaith Khan in a short skirt, too.

The performances by Ajay and Ramya are good, and Madhulika is okay, too - and given that at least two of them are on screen for 90% of the time, it suffices. The music by Sree Sai is hummable; the song with the mimes is well done. The movie is also well shot, moving between the dry lands of Narsipatnam to Hyderabad effortlessly.

All said and done, Sarai Veerraju is old sara in a new bottle; go for it only if you have time for a leisurely unfolding tale, which you anyway know already.
Share. Save. Connect.
Tweet
SARAI VEERRAJU SNAPSHOT

ADVERTISEMENT
This page was tagged for
sarai veerraju full movie telugu
sarai veerraju movie
Sarai veerraju movie in childhood
sarayi verraju full movie
Sarai Veerraju telugu movie
Follow @fullhyderabad
Follow fullhyd.com on
About Hyderabad
The Hyderabad Community
Improve fullhyd.com
More
Our Other Local Guides
Our other sites
© Copyright 1999-2009 LRR Technologies (Hyderabad), Pvt Ltd. All rights reserved. fullhyd, fullhyderabad, Welcome To The Neighbourhood are trademarks of LRR Technologies (Hyderabad) Pvt Ltd. The textual, graphic, audio and audiovisual material in this site is protected by copyright law. You may not copy, distribute, or use this material except as necessary for your personal, non-commercial use. Any trademarks are the properties of their respective owners. More on Hyderabad, India. Jobs in Hyderabad.