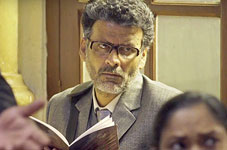 Josh / fullhyd.com
EDITOR RATING
8.0
Performances
Script
Music/Soundtrack
Visuals
9.0
8.0
7.0
7.0
Suggestions
Can watch again
Yes
Good for kids
No
Good for dates
No
Wait for OTT
No
Hansal Mehta is on an intriguing journey. First, he makes a film on a Muslim lawyer (shot dead in his own office) who fought pro bono cases of Muslims charged under the Prevention Of Terrorism Act. The film wakes you up to the inaccessibility of justice to these Muslims. And then he makes a film on a gay professor who got suspended and harassed in a ...Muslim university.

It's almost as if he's saying he just wants to point out the curtailing of rights, with no regard to which social group is having its rights curtailed and which group is executing the curtailing. How odd for a country that bases so much of its politics and functioning on religion, caste, region, sexual orientation etc.

Professor Siras (Manoj Bajpayee) was a Marathi professor in Aligarh University who had his house barged into when he was getting intimate with a rickshaw-puller of his acquaintance. Two reporters, with a camera and a baton, arrive uninvited on the scene of intimacy and start thrashing the duo coercing them into posing in lewd stances while they record and photograph them.

The university is outraged. No, not because its professor was assaulted in his own house in the middle of the night. Who cares for Article 21 (you know, that one that declares the fundamental right that no person shall be deprived of his life or personal liberty except according to procedure established by law) when there is a homosexual activity in progress in complete privacy? So the university administration promptly suspends the professor and kicks him out of his assigned quarters with a week's notice.

The film follows the court case that ensues, and the friendship that develops between the eccentric professor and journalist Deepu Sebastian (Rajkummar Rao) in this course (if you are absolutely dying to know - no, no intimacy is alluded to them in the film). The script, researched by Ishani Banerjee and written by Apurva Asrani, is quite straightforward, authentic and touching.

What Manoj Bajpayee does with it is worth a lifetime achievement award. He vanishes into the role of this soft, idiosyncratic, poetic man; whose troubles are written on the brow but seem to be erased by the smile on the lips. If you have had that avuncular professor in college, speaking that particular kind of convent English, making poor jokes that he relishes but just make you smile, you'll find that gentleman in Manoj Bajpayee in Aligarh.

It becomes more delicious when you watch Bajpayee and Rao interact. That Rao is excellent is a fact already witnessed in Shahid, Gangs of Wasseypur, and even Queen (where you understand how you get someone to loathe you even while you're flashing a bright smile). The range expands with Aligarh, and it seems well likely that he'll be as good an actor as Bajpayee in time.

Well-meaning films can be found a dime a dozen - the question is always one of execution. Mehta's is among the best possible executions a script like this could get. There is a mellow scene where the harrowed professor is sipping whiskey with moist eyes, gesticulating to an old Hindi song (he claims to have left Maharashtra for Aligarh with his Lata Mangeshkar). The scene, apart from serving as a platform for Bajpayee to demonstrate sublime talent, throws light on the personality of Professor Siras without having him speak a word.

The striking thing about Aligarh, as with Shahid, is that it doesn't give in to the temptation of having to make someone else a villain. There is subtle bespeaking of the less-than-noble intentions of the university administration, but there is no scene where they are actively being villainous. The film just doesn't dwell on them, and spends its time on its protagonist's story alone. If you finally feel he had been given a bad deal, then the film has registered its success without having to point a finger at anyone.

That the film is rated 8 doesn't mean you have to drop everything and go watch it. There is any number of people who'll be troubled with Aligarh. If you believe homosexuality is a sin or you're just uncomfortable with the idea, or if you don't want to spend time on a film that is barely entertaining, you don't have to view it. It doesn't appear like Hansal Mehta would mind. It appears he'll be making his intrepid journey whether or not we join him.
Share. Save. Connect.
Tweet
ALIGARH SNAPSHOT 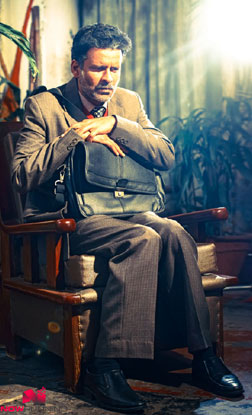 ADVERTISEMENT
This page was tagged for
Aligarh hindi movie
Aligarh reviews
release date
Manoj Bajpayee, Rajkummar Rao
theatres list
Follow @fullhyderabad
Follow fullhyd.com on
About Hyderabad
The Hyderabad Community
Improve fullhyd.com
More
Our Other Local Guides
Our other sites
© Copyright 1999-2009 LRR Technologies (Hyderabad), Pvt Ltd. All rights reserved. fullhyd, fullhyderabad, Welcome To The Neighbourhood are trademarks of LRR Technologies (Hyderabad) Pvt Ltd. The textual, graphic, audio and audiovisual material in this site is protected by copyright law. You may not copy, distribute, or use this material except as necessary for your personal, non-commercial use. Any trademarks are the properties of their respective owners. More on Hyderabad, India. Jobs in Hyderabad.