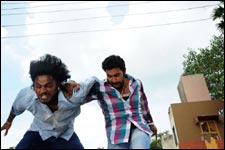 Deepa Garimella / fullhyd.com
EDITOR RATING
3.0
Performances
Script
Music/Soundtrack
Visuals
4.0
2.0
4.0
4.0
Suggestions
Can watch again
No
Good for kids
No
Good for dates
No
Wait for OTT
No
When all else fails, copy your uncle. That seems to have been Taraka Ratna's mantra in Nandeeswarudu, a film that is pretty pitiful in how it has nothing going for it. What is more baffling is that someone actually remade a movie to make this one.

For the curious, the plot follows the journey of Nandu (Taraka Ratna) from sober student to do-gooder don. Hot on his heels is a police officer (Jagapathi Babu), who wants to end this business of goons taking the law into their own hands.

Nandu was actually a decent boy who aspired for the IPS, and who minded his own business. However, when the goons (Ajay and others) kill and rape people right in front of him, Nandu changes his track.

Following an encounter with one of these goons, he lands in jail. He's released after 6 months, but he cannot bear to go home, since he is the son of the virtuous Ananda Bhupati (Suman), in whose house a criminal cannot reside.

He vows to make up for his deeds and go on with his IPS dream, but eventually, ends up fighting for the powerless. As a result, people revere him like nobody's business, as Nandeeswarudu.

As we noted, top cop Jagapathi is busy trying to throw Nandu behind bars. Several gory fights later, the dust settles, and you get to go home in one piece.

Nandeeswarudu has a tired old script, and the makers don't even try to do anything different with it. The dialogues are insipid, too. In addition, we have bloodshed and limbs and heads being chopped and thrown about.

The drabness of the script is accentuated by the limp performances. Taraka Ratna probably wants to do a good job, but he needs a better director. His dialogue delivery lacks the punch, and he even needs to work on his diction. And the scenes where he has to be all macho and powerful just don't work.

The heroine is forgettable. She's given a couple of songs, including one Raghavendra Rao style number, with milk, honey and fruits splashed all over her - and that's it.

Jagapathi Babu continues his style of acting, and appreciating it is a matter of taste. He, however, keeps appearing only at certain intervals in the film. Rajeev Kanakala, who plays Nandu's friend, lends some dignity to the movie. So do the seniors - Suman, Sita, and others.

Meanwhile, we don't accuse you of wanting to know this, but the music is lackluster, and so are the visuals.

In all, Nandeeswarudu is sure to die a quick death at the box office. Let's hope it doesn't hit the small screen this Diwali.
Share. Save. Connect.
Tweet
NANDEESWARUDU SNAPSHOT

ADVERTISEMENT
This page was tagged for
Nandeeswarudu telugu movie
Nandeeswarudu reviews
release date
Taraka Ratna, Jagapathi Babu
theatres list
Follow @fullhyderabad
Follow fullhyd.com on
About Hyderabad
The Hyderabad Community
Improve fullhyd.com
More
Our Other Local Guides
Our other sites
© Copyright 1999-2009 LRR Technologies (Hyderabad), Pvt Ltd. All rights reserved. fullhyd, fullhyderabad, Welcome To The Neighbourhood are trademarks of LRR Technologies (Hyderabad) Pvt Ltd. The textual, graphic, audio and audiovisual material in this site is protected by copyright law. You may not copy, distribute, or use this material except as necessary for your personal, non-commercial use. Any trademarks are the properties of their respective owners. More on Hyderabad, India. Jobs in Hyderabad.