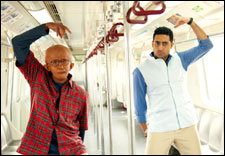 Deepa Garimella / fullhyd.com
EDITOR RATING
6.5
Performances
Script
Music/Soundtrack
Visuals
10.0
6.5
9.0
8.0
Suggestions
Can watch again
No
Good for kids
No
Good for dates
Yes
Wait for OTT
No
You don't need to peel much off Paa to feel the Big B breathing life into it. The wit belongs to him, the eyes are his, and the enthusiasm is his. Bring on a bigger crown for the superstar, though - Bachchan's Auro is wider at the top.

However, people - okay, most people - don't pay to watch movies wanting to feel doomed, except if the apocalypse arrives with fanfare, or with anesthetizing song and dance. Auro looks like bad news right from the moment that bulbous wrinkled head peeps in through his school auditorium door. He's a cruel slip-up of destiny, and as long as you're with him, the lump in the throat refuses to go.

And, progeria is not blindness or dyslexia. It's too rare and extreme a condition to expect people to identify experiences with. Paa, then, is a rather outlandish experience as a movie.

Auro is the illegitimate child of Amol Atre (Abhishek Bachchan) and Vidya (Vidya Balan). He's raised by his mother Vidya, who had left Amol in a huff, after he panicked at news of the unplanned child.

Auro is born with progeria, a genetic disorder that causes him to age many times faster than normal people. He's now 12 years old, and much smarter and more mature than the rest of his class, but his body's ageing really fast, and he won't live too long. Paa's story is about how the stage is set for Auro meeting his dad, and later, what happens when they meet.

There's no reason why the promos should cry hoarse about the father-son-son-father relationship - Paa is more about Auro's relationship with his mother. There's undue emphasis on Amol's role as a young "working-hard" politician, and the advertised bonding comes in only in the second half.

And the best scenes aren't between the father and the son, anyway - they're all taken by Vidya. She has to mother him and still treat him like a child, and it's quite interesting to watch the perfect parent at work. But then, Vidya's fierce indignation at Amol seems selfish after a point, and drags the film through some unnecessary emotional sludge.

Stellar performances by Amitabh Bachchan and Vidya Balan apart, Auro is quite high on the cuteness factor, what with Auro's razor-sharp humour targeted at kids his age and adults alike.

Balki, however, inexplicably unnerves his viewers with a couple of scenes completely out of character with the film. One is a conversation among 12-year-olds (Auro's classmates) on why the word "bast***" is no longer a gaali. Revealing the other one would be a spoiler, but here's a hint - it involves the phrase "should have used a condom" at least thrice in a paragraph. Maybe Balki wanted to reflect what really goes on in the real world, but whether you bring your kids to the movie or not, is upto you.

Amitabh Bachchan is quite the father of the proceedings. The make-up, and the muffled and faked voice distract you from what's really inside, but the unmistakable Bachchan signature emerges when the humour kicks in. Vidya Balan has as much logically correct screen space as Amitabh Bachchan does, and she's charming and elegant, apart from being the obvious - a spontaneous actress.

Arundhati Naag is good as Vidya's mother. Paresh Rawal plays the retired politician Atre, Amol's father, and is given a small role. With his regular dose of guffaw-evoking dialogues, though. Amidst talent of this sort, Abhishek falls slightly flat, but doesn't quite derail the train.

Ilayaraja may have re-used a tune or two from his earlier works, but Ilayaraja being Ilayaraja, he's in top form. He elevates the Paa experience a couple of degrees more, with that brand of music that makes you think more than hum.

And now, for the visuals - how is Auro shown to be as short as a teen? Well, he's not. He's still shown to be tall, but clever photography angles - and regular close-ups of Auro - prevent you from noticing how short the others really are.

In all, Paa is a good film, but a heart-breaker from beginning to end. Not quite everyone's cup of tea.
Share. Save. Connect.
Tweet
PAA SNAPSHOT

ADVERTISEMENT
This page was tagged for
telugu paa movie
Paa hindi movie
Paa reviews
release date
Amitabh Bachchan, Vidya Balan
Follow @fullhyderabad
Follow fullhyd.com on
About Hyderabad
The Hyderabad Community
Improve fullhyd.com
More
Our Other Local Guides
Our other sites
© Copyright 1999-2009 LRR Technologies (Hyderabad), Pvt Ltd. All rights reserved. fullhyd, fullhyderabad, Welcome To The Neighbourhood are trademarks of LRR Technologies (Hyderabad) Pvt Ltd. The textual, graphic, audio and audiovisual material in this site is protected by copyright law. You may not copy, distribute, or use this material except as necessary for your personal, non-commercial use. Any trademarks are the properties of their respective owners. More on Hyderabad, India. Jobs in Hyderabad.