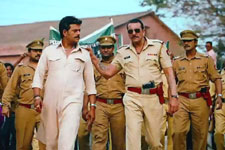 Nupur Barua / fullhyd.com
EDITOR RATING
4.0
Performances
Script
Music/Soundtrack
Visuals
5.0
4.0
5.0
5.0
Suggestions
Can watch again
No
Good for kids
No
Good for dates
No
Wait to rent it
No
Indian cinema, in its 100th year, seems to be running out of actors, ideas, stories and screenplays. It is inevitable that every frame that you see will always be something you think you have seen before. Question is - how many times can you watch the same type of movie before you realise that you have had enough?

Zila Ghaziabad may just attain the dubious distinction of being the movie that is going to put you off rustic dramas forever, if not the dialect (each dialogue is meant to hit you like a bullet between the eyes). Every movie ever set in the small town areas of North India, from Omkara to Dabangg, is the inspiration for this mash-up of a movie that claims to showcase the realities of hooliganism in the district of Ghaziabad, right next door to the national capital.

There are two big dons in the area - the Chairman (Paresh Rawal), and Rashid (Ravi Kissen). Their persistent showdowns usually revolve around plots of land that one or the other has seized. The Chairman has, by his side, his brother-in-law (Sunil Grover) and the hot-headed Fauji (Arshad Warsi), so life is good.

The local school teacher, Satbir (Vivek Oberoi) is in love with the Chairman's daughter (Charmee Kaur), and is therefore quite naively willing to help out his prospective father-in-law with legal issues (he is the most qualified/educated man in the area). The increasing camaraderie between the two of them prompts the Shakuni-like brother-in-law to stage a walkout from the Chairman's camp, even as he instigates Fauji to join hands with Rashid.

A series of incidents forces Satbir to turn from visionary reformer to narrow-minded and focused criminal, and soon, Fauji and Satbir are the bane of the region. Rather reluctantly, when it looks like the lawless land needs instant redemption, the authorities send in Inspector Pritam Singh (Sanjay Dutt), the eccentric policeman, to sort things out.

The story is based on real events that affected the Gujjar clan in the 1990s, or so we are led to believe. It is unlikely that a true story of badass goons can go so wrong, and become so monotonous. The only explanation is, then, this - the scriptwriter did not pay attention to the structure of the story at all, presumably because he/she was so busy writing action sequences. Violence is abundant in the movie, and that is enhanced by OBVIOUS wirework and choreography. The mindlessness of the viciousness and vehemence is so irrelevant that the movie becomes an unintentionally funny one.

And then there are the dialogues. One is never sure why the actors speak the way they do - switching among Hindi, Haryanvi and Bhojpuri (when angry, for example, use Haryanvi). The content in the dialogues is amateurish, to say the least. Actually, this holds true for the execution of the entire script. In the process of embellishing this rural drama, the plot loses out and becomes redundant. It is anything but compelling, and very, very confusing.

The director depended on his actors to enact their characters as they pleased, or so it seems. None of the actors look like they were briefed on their roles. So they did what they could.

Vivek Oberoi, though sincere, is lost. He is so busy hamming his emotions that you lose interest and concentrate on his bleached hair (how does it remain unruffled even after helmetless bike sequences and a whole lot of action sequences?). His dialogue delivery is reminiscent of B-grade actors in the 1990s (since the movie is set in that particular era, it may not be such a bad thing, actually).

His love interest, played by Charmee Kaur (of Buddha Hoga Tera Baap fame), is insipid and relentlessly annoying. The other women - Divya Dutta, Minissha Lamba and Zarina Wahab - are wasted.

Moving on, Paresh Rawal is the only one who does justice to his role, but then, he is such an accomplished actor. Arshad Warsi makes an impact, definitely, but you may have mixed feelings about his dedication to his character. Sunil Grover is suitably sleazy, and Ashutosh Rana is frighteningly menacing.

The only reference to the period that the story takes place in is the mention of the movie Khalnayak, and some really bad costumes carried off with ?©lan by Charmee Kaur. Production design is between indifferent and average - mobile phones are definitely not from the period, and cars have Maharashtra number plates.

Cinematography is uninspiring, and the choreography in action sequences is bland and repetitive. The two item numbers are irritating, despite the presence of Shriya Saran and Geeta Basra.

Watch Zila Ghaziabad only if you are interested in a mediocre adaptation of Dabanng and the likes. Be prepared for restlessness, if you are lucky, or a very bad headache. And you will realise that this is the end of a genre.
Share. Save. Connect.
Tweet
ZILA GHAZIABAD SNAPSHOT 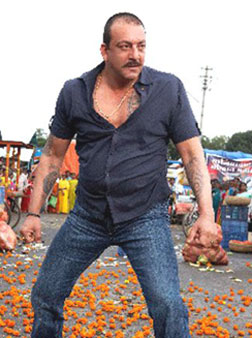 ADVERTISEMENT
This page was tagged for
Zila Ghaziabad hindi movie
Zila Ghaziabad reviews
release date
Sanjay Dutt, Arshad Warsi
theatres list
Follow @fullhyderabad
Follow fullhyd.com on
About Hyderabad
The Hyderabad Community
Improve fullhyd.com
More
Our Other Local Guides
Our other sites
© Copyright 1999-2009 LRR Technologies (Hyderabad), Pvt Ltd. All rights reserved. fullhyd, fullhyderabad, Welcome To The Neighbourhood are trademarks of LRR Technologies (Hyderabad) Pvt Ltd. The textual, graphic, audio and audiovisual material in this site is protected by copyright law. You may not copy, distribute, or use this material except as necessary for your personal, non-commercial use. Any trademarks are the properties of their respective owners. More on Hyderabad, India. Jobs in Hyderabad.