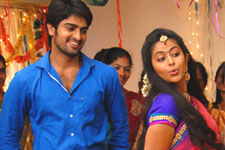 Kritika Deval / fullhyd.com
EDITOR RATING
5.5
Performances
Script
Music/Soundtrack
Visuals
6.5
5.0
7.0
7.0
Suggestions
Can watch again
No
Good for kids
Yes
Good for dates
Yes
Wait for OTT
No
The unwieldily titled Lakshmi Raave Maa Intiki begins at a funeral. To be specific, at the funeral of a friend of our hero Sai (Naga Shourya), who apparently sacrificed himself at the altar of love. This touching scene involves a Pledge. To be specific, a pledge to swear off of feminine wiles and to settle down to brides of the family's choice. This writer then settled down with a groan, fully expecting to be regaled by one of those crass coming-of-age odysseys that our filmmakers have been so fond of of late. When Sai then goes on to spot our heroine Lakshmi (Avika Gor), track her down, and then stalk her in true Tollywood fashion, this prediction seems to be truer still.

You can imagine our surprise, then, when about a half-hour into Lakshmi Raave Maa Intiki (to be referred henceforth as LRMI), the film turns out to be a rather charming little romance with a few clean laughs to help it along. This is just one of the signs of a movie that seems pretty clear as to what it wants to be but not so much about how to get there.

Let's get the basic plot out of the way first. Sai falls headlong in love with Lakshmi, d/o Anand Rao (Rao Ramesh), a finicky but caring man who is overly fond of getting his own way. She is also a very obedient daughter, who makes it clear to Sai that she'll marry a dog if daddy says so, and that the way to win her hand is via her father. So off goes Sai to inveigle himself into Anand Rao's clockwork-operated family, but is defeated by his own lackadaisical approach to life and its various vagaries.

There is also something about the father's former flame who Lakshmi feels the need to support (secretly, of course) during her dying days, a promising description of exactly how smoothly Anand Rao keeps his family running that is not much in evidence excepting an "attendance register" that all the house's residents are meant to fill in with all their comings and goings, another barely-a-plot involving a runaway marriage, and a score of other sub-plots that writer/director Nandyala Ravi picks up on whim and drops off without hesitation when they don't seem to be getting him anywhere.

The dialogues in the first half are nice and are written with a light hand, providing enough intrinsic humor so that the inevitable "comedy" scenes don't come off as too obnoxious. The relationship between our lead pair seems to be coming along nicely, with surprisingly clear communication between the two, and their growing closeness seeming natural despite the heavy-handed beginning.

The fun first half, although rather unfocused, is then followed by the second that is as heavy with drama as the first was free of it. All of the loose threads are bunched up into a knot so clumsy that there is no unknotting them. All of the family emotion that the first half heralds makes its presence felt in the second, culminating into a climax that is as confusing as it is underwhelming.

Both Naga Shaurya and Avika Gor give decent performances, led firmly along by screenwriting that is aware of all the niceties that go into making a watchable film, if not exactly a captivating, or even focused, one. Rao Ramesh is the only one who truly seems to get his own character, with the rest of the cast clearly hamming their way through to the end.

In all, LRMI comes off as a poor relative of romances of Bommarillu's ilk, entertaining for a while, but eventually tiresome. However, considering the showing this weekend, it might not be a half-bad way of spending a couple of hours with your family.
Share. Save. Connect.
Tweet
LAKSHMI RAAVE MAA INTIKI SNAPSHOT 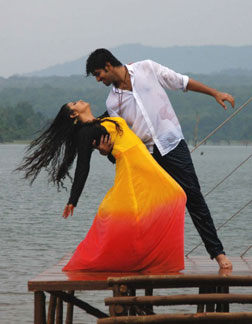 ADVERTISEMENT
This page was tagged for
subtitle for 2 lakshmi movie
Lakshmi Raave Maa Intiki Latest Naga Shourya Avika Gor Hindi debate
Lakshmi Raave Maa Intiki telugu movie
Lakshmi Raave Maa Intiki reviews
release date
Follow @fullhyderabad
Follow fullhyd.com on
About Hyderabad
The Hyderabad Community
Improve fullhyd.com
More
Our Other Local Guides
Our other sites
© Copyright 1999-2009 LRR Technologies (Hyderabad), Pvt Ltd. All rights reserved. fullhyd, fullhyderabad, Welcome To The Neighbourhood are trademarks of LRR Technologies (Hyderabad) Pvt Ltd. The textual, graphic, audio and audiovisual material in this site is protected by copyright law. You may not copy, distribute, or use this material except as necessary for your personal, non-commercial use. Any trademarks are the properties of their respective owners. More on Hyderabad, India. Jobs in Hyderabad.