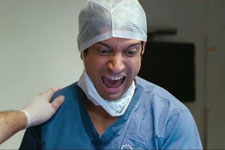 Nupur Barua / fullhyd.com
EDITOR RATING
5.0
Performances
Script
Music/Soundtrack
Visuals
6.0
5.0
6.0
7.0
Suggestions
Can watch again
Yes
Good for kids
No
Good for dates
Yes
Wait to rent it
Yes
Shaadi Ke Side Effects - the title is self-explanatory. If the director's previous film, Pyaar Ke Side Effects was any indication, this movie, too, is bound to be a male-oriented, male-sympathising, woman-bashing story, you think. And guess what? You are absolutely correct!

Not that woman-bashing is not fun, if done tastefully. And that is what Saket Chowdhary aims to do with his latest release. Unfortunately for him, he loses sight of a balanced script while executing the movie, and that is not good news for feminists in this country. Of course, you can always laugh it all off, and smile in an indulgent, superior manner at Chowdhary's attempts to depict the woes of a married man who is now a father to a wailing baby and a husband to a nagging wife.

Let us just say that it is all in good humour and that there is no reason to criticise the portrayal of a hormonally-imbalanced woman, but there is always this little niggling doubt that something is "off" with the way the story goes.

To begin at the beginning, Sid (Farhan Akhtar) and Trisha (Vidya Balan) meet at a night club, and hit it off. Before you can sigh and marvel at true love, you realise that they are already married, and are involved in some role-playing to add spice to their sex life. And then the inevitable happens - Trisha gets pregnant.

This is when Sid's life begins to tumble downhill, because his wife has become a harridan. When the baby finally arrives, Trisha becomes more than that, and Sid feels persecuted, since he is no longer the most important person in her life.

Sid, with advice from his brother-in-law (Ram Kapoor), decides to lead a dual life. He is the henpecked, much-harassed husband at home, but at night, he frequents night clubs pretending to be a single man. His support system is his cool buddy (Vir Das), who cannot complete a sentence without inserting a "bro" in it. The white lies and the deception soon take a toll on the marriage, and the couple has to make a few compromises if they want their bond to last for eternity, or, since it is an Indian film, for many rebirths.

The script is heavily biased towards Sid, and other male characters. He is harrowed, and therefore completely justified when he makes those little mistakes, because (a) he is honest about his shortcomings and (b) his wife drove him to insanity and back!

Some of the problems and issues dealt with in the story are unreal - for example, a father forgetting to bring his daughter home, since he was so involved in a television match broadcast.

The writers have incorporated a few real-life incidents from the actors' lives to make it realistic, one presumes. For example, Trisha as a successful advertising professional and Sid as a struggling artiste is reminiscent of the time when Farhan Akhtar was doing nothing and his wife was a prospering businesswoman. Also, the name, Sid, is a nod to Vidya Balan's real-life husband.

Despite these nuggets of real life, the movie becomes repetitive after a point, because all that is happening is that Trisha is a nag and Sid is the victim. The dialogues take digs at a man's fate after marriage and especially after fatherhood, but the humour intended does not really come across.

Trisha is unlikeable, which is what the filmmaker wants, one assumes, but Sid, who is supposed to be the person you sympathise with, comes across as a whining wimp most of the time. His sense of humour is not particularly impressive, and it is no wonder that Trisha is not amused, either. Much of the story is predictable, and there are no surprises.

Farhan Akhtar is a better director than an actor or singer, but since he has decided to make it as a hero, one cannot find too much fault with his acting. He tries too hard to be poker-faced and therefore funny, and the effort shows, but at other times, when he has to act like a normal human being, he pulls it off commendably. He does not do too good a job as the long-suffering victim, but he is convincing as the passionate lover and husband.

Vidya Balan, on the other hand, is a disappointment, as she yo-yos between seductive wife and imbalanced mother-to-be and mother. The fault lies in the writing, more than her acting, but she can get on to your nerves.

Vir Das could have done with less screen time, to make his contribution to Sid more effective, but one cannot find fault with his acting skills. The "bro" bit is overdone, though.

Ram Kapoor is decent, and stereotypical. Ila Arun, on the other hand, as the bat-crazy child-carer, is scary, and over the top.

The music is catchy, but not the best that Pritam has given us. Some of the foot-tapping numbers are already a hit, though.

The production design is credible, but the costumes could have been upgraded a bit - Vidya Balan looks frumpy, and Farhan Akhtar looks wannabe most of the time. The cinematography is effective, but not mind-boggling. And the movie needs to be re-edited a bit to get rid of the repetitive sequences.

Shaadi Ke Side Effects is a one-time watch, for a few laughs. Pyaar Ke Side Effects was a more realistic movie, though, and this one takes a bit to get used to. Although the idea is a realistic interpretation of life as a married couple with a kid, there are certain aspects that seem almost surreal. Then again, movie audiences are changing with the times, so this may just become a classic.
Share. Save. Connect.
Tweet
SHAADI KE SIDE EFFECTS SNAPSHOT 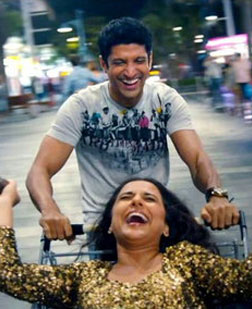 ADVERTISEMENT
This page was tagged for
Shaadi Ke Side Effects hindi movie
Shaadi Ke Side Effects reviews
release date
Farhan Akhtar, Vidya Balan
theatres list
Follow @fullhyderabad
Follow fullhyd.com on
About Hyderabad
The Hyderabad Community
Improve fullhyd.com
More
Our Other Local Guides
Our other sites
© Copyright 1999-2009 LRR Technologies (Hyderabad), Pvt Ltd. All rights reserved. fullhyd, fullhyderabad, Welcome To The Neighbourhood are trademarks of LRR Technologies (Hyderabad) Pvt Ltd. The textual, graphic, audio and audiovisual material in this site is protected by copyright law. You may not copy, distribute, or use this material except as necessary for your personal, non-commercial use. Any trademarks are the properties of their respective owners. More on Hyderabad, India. Jobs in Hyderabad.