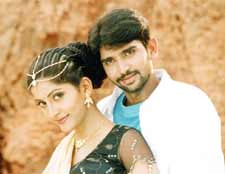 Smriti Kashyap / fullhyd.com
EDITOR RATING
1.0
Performances
Script
Music/Soundtrack
Visuals
NA
NA
NA
NA
Suggestions
Can watch again
NA
Good for kids
NA
Good for dates
NA
Wait for OTT
NA
Ever have one of those days when you wake up and you know that the whole day is going to rot? Mutyam is one of those terribly tragic flicks which, at the time of the credits itself, give you goosebumps, and you know that they will be nothing more than pure unadulterated crap.

The story starts with a particular bearded ogre Chanti (Rohit) who loafs with a gang of equally cool-looking trolls, when he comes across canine-o-phile Anu (Anu). He rescues her missing dog, thus inducing her (Anu, not the dog) into a state of puppy love before it turns into a full-blown case of kukka prema. Now that this disease is identified, they begin to develop an itch for marriage and want to get all tied up. But there's a fly in the ointment, in the form of Anu's dad.

Now this guy has had a bad experience with marriage - his first wife had an extra marital affair, so he's anti marriage. Gosh, and you thought that Freud happened to you when you were a kid. Anyway, the rest of the flick deals with how these two kids try to get him to agree to their marriage and stuff.

This is when you give yourself several doses of some lethal injection so that you stay put in a state of coma till the flick ends. It's really a tragedy of Macbeth-ian proportions to have to watch a flick with only the usher for company. This film has all the ingredients of a pot boiler - except for it's lack of a good script, some direction, a little bit of acting and a smidgen of music. It is sure to go the whole extra mile - cackle cackle - to hell!

The hero consistently looks like he's just been electrocuted to life. He's so weird looking, rumors have it that his mom used to tie a porkchop around his neck just so the dog would play with him. That actress and her dog are nothing to scribble home about either.

Well that's the funda about the flick. If you want to catch it, be my guest, but don't be surprised if the guy in the projection room curses you for spoiling his day off.
Share. Save. Connect.
Tweet
MUTHYAM SNAPSHOT

ADVERTISEMENT
This page was tagged for
muthayam telugu movie
muthyam movie
Muthyam telugu movie
Muthyam reviews
release date
Follow @fullhyderabad
Follow fullhyd.com on
About Hyderabad
The Hyderabad Community
Improve fullhyd.com
More
Our Other Local Guides
Our other sites
© Copyright 1999-2009 LRR Technologies (Hyderabad), Pvt Ltd. All rights reserved. fullhyd, fullhyderabad, Welcome To The Neighbourhood are trademarks of LRR Technologies (Hyderabad) Pvt Ltd. The textual, graphic, audio and audiovisual material in this site is protected by copyright law. You may not copy, distribute, or use this material except as necessary for your personal, non-commercial use. Any trademarks are the properties of their respective owners. More on Hyderabad, India. Jobs in Hyderabad.