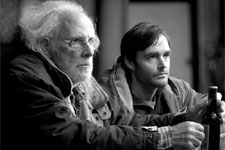 Nupur Barua / fullhyd.com
EDITOR RATING
7.0
Performances
Script
Music/Soundtrack
Visuals
6.0
5.0
6.0
7.0
Suggestions
Can watch again
Yes
Good for kids
No
Good for dates
Yes
Wait to rent it
No
For those not familiar with Alexander Payne's work as a director - he has given us some gems such as About Schmidt, Sideways and The Descendants. Most of his films are set in Omaha and around, and recurring themes include relationships, especially marriages and adultery. His latest offering, Nebraska, does not stray too far from the whole relationship angle, but what makes it different is that it is shot in black and white, thus emphasising the starkness of the Midwestern part of the United States, as well as the desolation and mundane everyday existence in the lives of the people there.

The sheriff of Billings spots Woody Grant (Bruce Dern) walking aimlessly on the streets, with no clear idea of where he is headed. The sheriff calls Woody's son, David (Will Forte), which is when the latter learns that his father is on his way to Lincoln, more than 1,400 km away. Woody is convinced that he has won a million dollars in the lottery, or at least that is what the sweepstakes letter tells says. David realises that it is a scam, but Woody is adamant to collect his share.

Woody's wife, Kate (June Squibb), confides to her son that she is fed up of her husband's obsession. This is not the first time that he has just walked away on his way to the big city. When this happens again, David is forced to intervene and decides to indulge his father. So the two of them set out on a road trip, much to his mother's ire and his brother, Ross's (Bob Odenkirk) disgust.

A small mishap forces the father-son duo to take a detour and stop by at Ray (Rance Howard) and Martha's (Mary Louise Wilson) house in Hawthorne. Ray is Woody's brother. This is the same small town where both Kate and Woody lived and grew up before they shifted to Billings. Kate and Ross plan to join them there for a reunion with all the surviving brothers that Woody has, and their families. Woody and David meet Ed Pegram (Stacy Keach) at a local bar, and despite David's warning, Woody tells his old business partner about the million dollars he thinks he has won, and that he is on his way to collect it. The news spreads through the little town, like wildfire. Soon, Ed and Woody's brothers' families begin to ask for their share of money that they believe they are owed. David tires of telling all of them that the million dollars is a fantasy, but they refuse to believe him.

The story is essentially that of a son rediscovering his bond with his father, after years of being ignored and unwanted. Weaving a road trip into the screenplay may seem like a gimmicky device to execute the screenplay, but it works well in this case. Given that the Grant men do not speak much, most of the movie has a silent Woody, always in his own world, while his son tries to understand not only what his father is all about, but also what he once was. A visit to his father's childhood town gives him a new perspective on the confused old man he is travelling with. He discovers past traumas, past sweethearts and past so-called friends, which make him appreciate his father even more.

His brother, Ross, who does not spend time alone with his father, still believes in the fact that Woody was a terrible father, but David discovers otherwise. Eventually, the plot revolves around how far a son will go to fulfil his cranky old father's fantasy. The dialogues emphasise the distance between the father and the son in the beginning, and later, dialogues are replaced with actions and emotions to show the appreciation they both begin to have for each other.

Bruce Dern, who mostly plays character roles, is a joy to behold. He portrays his character with such conviction that it is easy to forget that he is only acting. Will Forte, known mostly for his comedies, is restrained and touching.

June Squibb is perfect as the nagging wife and mother, and Bob Odenkirk looks the part of a vain newsreader. Stacy Keach is suitably sleazy, and Rance Howard and Mary Louise Wilson are perfectly cast - they could have done with longer roles. Devin Ratray and Tim Driscoll, who play brothers, are apt for their characters.

Shot in black and white, the canvas itself is bleak and depressing. There is no fancy set dressing to make up for the lack of colour, which only lends to the authenticity of the region that the director is trying to portray. Costumes are basic.

The background music remains consistently monotonous, in keeping with the theme of the movie, and is therefore very effective. The cinematographer uses the plains of the region to his advantage, giving us wide sweeping shots of the road and of the houses in the small towns, thus adding to the atmosphere of desolation. Editing is crisp, and not once does your attention waver, despite the visuals and actions being slow.

Watch Nebraska to know that no matter where in the world you live, some problems are universal, and this movie deals with coming to terms with the inevitable decline of a parent's mental health. The characters may remind you of somebody you know. Above all, watch it to give your eyes a break from all that colour that we are assaulted with on screens these days, and experience life in black and white.
Share. Save. Connect.
Tweet
NEBRASKA SNAPSHOT 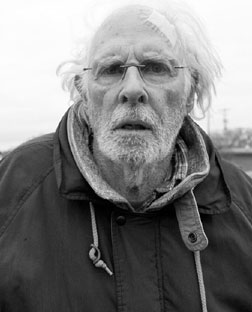 ADVERTISEMENT
This page was tagged for
Nebraska english movie
Nebraska reviews
release date
Bruce Dern, Will Forte
theatres list
Follow @fullhyderabad
Follow fullhyd.com on
About Hyderabad
The Hyderabad Community
Improve fullhyd.com
More
Our Other Local Guides
Our other sites
© Copyright 1999-2009 LRR Technologies (Hyderabad), Pvt Ltd. All rights reserved. fullhyd, fullhyderabad, Welcome To The Neighbourhood are trademarks of LRR Technologies (Hyderabad) Pvt Ltd. The textual, graphic, audio and audiovisual material in this site is protected by copyright law. You may not copy, distribute, or use this material except as necessary for your personal, non-commercial use. Any trademarks are the properties of their respective owners. More on Hyderabad, India. Jobs in Hyderabad.