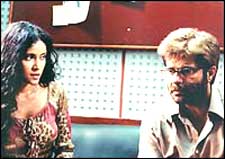 Ghazala Rizvi / fullhyd.com
EDITOR RATING
7.5
Performances
Script
Music/Soundtrack
Visuals
NA
NA
NA
NA
Suggestions
Can watch again
NA
Good for kids
NA
Good for dates
NA
Wait for OTT
NA
Tempting as it may sound, your wife's murder is not always a route to a peaceful after-life for you. My Wife's Murder, however, does not offer alternate suggestions, nor asks you to keep restraint - it is a credible story, well told by the masters of their trade.

My Wife's Murder is the story of Ravi Patvardhan (Anil Kapoor), who is the owner of a video editing outfit, and is leading a sublime, low profile life, strictly outside of his house. Once he steps inside, he transforms into a soft target for the vituperative attacks of his wife Sheila (Suchitra Krishnamoorthy). The topics are many, and the details, mundane and exhaustive. But largely looming over the horizon is the one-sided conversation on Ravis's pseudo affair with his assistant, Reena (Nandana Sen).

Now husbands are simple creatures, wanting their food, snooze, TV and sex. Beyond this, they have few, if any, claims on the domestic environs. They are ever watchful of their children's academic progress, their wife's companionship needs, and electricity bills - but they like to do it all while lying in easy chairs over a cup of hot coffee. Ravi is almost an exception to his genre; he is subdued, actively involved with his kids, and passively with Sheila.

And wives… well, it is a topic worth exploring what transforms the pre-nuptial girls into nagging, pushing matrons once they get the keys to man's house. Sheila is a few steps ahead; haunted by her own inner paranoia, she waits eagerly for Ravi's return to unload her stuff on him.

The otherwise inhibited Ravi, one day hits back at his charging wife, and accidentally, if conveniently, kills her. Instead of being overjoyed at his serendipitous act, Ravi goes through a churn mill of emotions - remorse, guilt, fear of losing his children. All requiring an actor of Anil Kapoor's caliber, to portray the just amount of each ingredient without invoking any tiresome melodrama.

Quickly disposing off of the guilt, Ravi thinks of a safe way out of this bloody mess. Bringing an unprofessional perspective to dead-body dispensation, he parcels Sheila into a carton and tosses it off into suburban waters. Tomorrow, as they say, is another day. Ravi takes the kids' mom's place at the breakfast table, and gets set for a normal day's work, even though all the while breathing a little uneasily.

Contrary to popular myth, the Indian police does keep a vigilant eye over its beat, even if it chooses to look the other way once in a while. A body is fished, labeled as Sheila, and Inspector Tejpal Randhawa (Boman Irani) declares Ravi guilty. What is required is a conclusive loophole in Ravi's explanation of the fatal day's events, or easier still, an outright confession by him.

Tejpal's increased and repeated pressure forces Ravi to go on the run, with his kids in the tow. The attempt is made pitiable as Ravi, an ordinary man with little experience or interest in crime, desperately clings to freedom so as to become a part of his children's future.

It is difficult to say that Boman Irani, as Inspector Tejpal, is at his best - simply because none of his previous roles, spanning from comedy to serious, can be technically compared to this somber, true-to-life act. It is safer to say that he is simply one of the best in the industry. Contrasting Inspector Tejpal's position in field and in his own house (with a carping wife of his own), Boman lends credibility to the other side of the story about domestic harassment.

Anil Kapoor, as the silent, reflective Ravi, a passionate father and a caring employer, is truly impressive. Playing an average Indian, a man you can identify with your neighbor or unfortunately, with yourself, Anil is eons ahead of his Tezaab days. Nandana as Reena makes her own claim at a bright future ahead.

My wife's Murder, while touching several untapped issues, is never prosaic. Steering clear of all attempts at being didactic, it is a story, simply told. It sneaks into the domestic arena, portraying the daily hum created by two people trying to live together. It hints at the fact that a man and a woman can share a warm and respectful relationship outside of marriage, without divulging into romanticism.

The movie will hold you throughout the first half, while loosening its grip a little towards the end. With no songs and very little suspense, My Wife's Murder, though not classifying as a thriller, will be known for brilliant performances. And a story that borders on being scary - simply because it comes too close to reality for comfort.
Share. Save. Connect.
Tweet
MY WIFE'S MURDER SNAPSHOT

ADVERTISEMENT
This page was tagged for
my wife murder full movie afilmywap
My Wifwe Mom.com
my wife's murder movie story
My Wife's Murder hindi movie
My Wife's Murder reviews
Follow @fullhyderabad
Follow fullhyd.com on
About Hyderabad
The Hyderabad Community
Improve fullhyd.com
More
Our Other Local Guides
Our other sites
© Copyright 1999-2009 LRR Technologies (Hyderabad), Pvt Ltd. All rights reserved. fullhyd, fullhyderabad, Welcome To The Neighbourhood are trademarks of LRR Technologies (Hyderabad) Pvt Ltd. The textual, graphic, audio and audiovisual material in this site is protected by copyright law. You may not copy, distribute, or use this material except as necessary for your personal, non-commercial use. Any trademarks are the properties of their respective owners. More on Hyderabad, India. Jobs in Hyderabad.