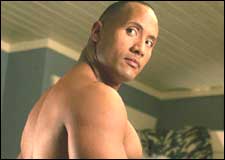 Charisma Murari / fullhyd.com
EDITOR RATING
5.0
Performances
Script
Music/Soundtrack
Visuals
NA
NA
NA
NA
Suggestions
Can watch again
NA
Good for kids
NA
Good for dates
NA
Wait to rent it
NA
In Walking Tall, The Rock plays a character inspired by American hero Buford Pusser, yet he is called Chris Vaughn. We thought this was baffling, baffling, baffling till we tried 'Sheriff Pusser' on for size. From 'The Rock' to 'Pusser'…surely an occasion for that fish-hook-eyebrow expression.

That expression is really special. It says so much. So what if you cannot pin it down to what actually has to be said? Does that make him a poor actor? Certainly not! It does not make him an actor at all.

Walking Tall sees Chris Vaughn return home (after serving in the Special Forces) to find the town in a state of complete economic and moral degeneracy. And he finds that his old pal/nemesis Jay Hamilton Junior (Neal McDonough) is the root of the rot. Actually, as soon as you see Jay, in his bleached hair, light-eyes, lame accent and big car - you know the guy is bad. There is no way you get to play 'good guy' in that kind of get-up.

Jay is pure evil. He closes the mill that is the life-blood of the town to open a casino. Well, if more money makes one evil…we want to be EVIL. Anywho, this casino is also a cover up for some intense drug manufacture and indiscreet trafficking.

When Chris's nephew gets stoned on crystal meth there just has to be trouble, bubba! Chris picks up his cedar log and rams it into everything in sight in Jay's casino. If someone's head gets in the way - well, tough!

This movie is not above indulging in clichés. Quite like this review, actually. So, of course there is an arrest, a dishonest council for Chris, and an impassioned appeal to the jury to let right triumph over wrong.

When the melodramatic performance by The Rock ends before it even starts, you find yourself praying that that is not indicative of performances in er…some other areas. At any rate, this quickie promptly has him elected Sheriff giving him the licence to bash up some baddies.

Towards the fag-end a showdown between Jay and Chris results in a seriously broken leg for the latter leading to a 'you have gotta be kidding me' moment as The Rock straightens the bone back into position. After this scene is done, you are really glad the pain is over. Now you can go home.

Walking Tall is not about stellar performances. It was never expected to be. It isn't about great action either. But it was supposed to be.
Share. Save. Connect.
Tweet
WALKING TALL SNAPSHOT

ADVERTISEMENT
This page was tagged for
Walking Tall english movie
Walking Tall reviews
release date
The Rock, Neal McDonough
theatres list
Follow @fullhyderabad
Follow fullhyd.com on
About Hyderabad
The Hyderabad Community
Improve fullhyd.com
More
Our Other Local Guides
Our other sites
© Copyright 1999-2009 LRR Technologies (Hyderabad), Pvt Ltd. All rights reserved. fullhyd, fullhyderabad, Welcome To The Neighbourhood are trademarks of LRR Technologies (Hyderabad) Pvt Ltd. The textual, graphic, audio and audiovisual material in this site is protected by copyright law. You may not copy, distribute, or use this material except as necessary for your personal, non-commercial use. Any trademarks are the properties of their respective owners. More on Hyderabad, India. Jobs in Hyderabad.