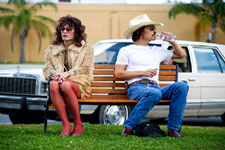 Nupur Barua / fullhyd.com
EDITOR RATING
7.0
Performances
Script
Music/Soundtrack
Visuals
8.0
6.0
6.0
7.0
Suggestions
Can watch again
Yes
Good for kids
No
Good for dates
Yes
Wait for OTT
No
When Bill Minutaglio wrote an article on Ron Woodroof in 1992, in The Dallas Morning News, little did he know that his subject would one day become a film made well enough to be given the Oscar nod. The screenwriter, Craig Borten, went on to meet Ron Woodroof, and thought his story was interesting enough to be a complete biopic. Over the years, Woody Harrelson, Brad Pitt and Ryan Gosling were contenders for the lead role, but financial constraints delayed the making. Finally, it all came together, after more than two decades, and Matthew McConaughey suddenly became the talk of the town after it released.

Ro Woodroof (Matthew McConaughey) is a homophobic, cocaine-snorting, obnoxious electrician in the early 1980s Dallas. He is a man's man, but an electrical accident at work puts him in hospital, where the doctors tell him that he is HIV Positive, and has about a month to live. Woodroof scoffs, of course, but then he slowly comes to terms with his ailment. When panic sets in, he begins to bribe a staff member of the hospital to obtain AZT, a medicine that is widely believed to extend the life expectancy of patients like him.

What he does not know is that AZT is killing him slowly, and destroying whatever little is left of his immunity system. When his source is forced to stop supplying him with the drug, Woodroof goes to Mexico to find some more stash. It is here that he meets with Dr. Vass (Griffin Dunne), who not only tells him the unknown facts about AZT, but also prescribes alternative medicine.

The problem is, this medicine is not legal in the USA, since the Food and Drug Administration (FDA) officials have not approved of it. Realising that there is money to be made, Woodroof smuggles in 3,000 pills of unapproved proteins and vitamins into the USA.

Woodroof hangs around support group gatherings and other places where he thinks AIDS patients may hang around. Slowly, he is forced to discard his anti-gay stand, and makes transvestite Rayon (Jared Leto), somebody he met at the hospital, his business partner. They hire an office space, and business is great (it becomes known as the Dallas Buyers Club, with a fee of $400 for membership), but the FDA has its eyes on the dealings, and they are determined to use every law in the book to prevent Woodroof from selling these pills.

The real Ron Woodroof, who died in September 1992, was apparently not a gay-hater, as the movie portrays. He was also not as obnoxious as the film suggests. In fact, he had a sister and a daughter, but that and other aspects of the character are missing, because the writer thought it would be more interesting to follow the journey of a desperate man.

The characters of Rayon and Dr. Eve Saks (Jennifer Garner) are fictitious, but they lend a certain layer to the screenplay. The plot of the movie revolves around Woodroof, and his several attempts to wean people away from the harmful (FDA-approved) drugs. Despite his profanities and his disgusting behaviour, Woodroof comes across as an ordinary man whose main intention is to survive, and to eventually help people. The character has a certain graph - from rude man to philanthropist - but that is more the work of fiction than fact.

Matthew McConaughey lost more than 20 kilos for this role, and even shut himself up in his house to attain a pallor that is scary. He is so involved in his role that it becomes hard to identify him as the charming, swaggering personality that we are used to seeing on the screen. With sunken cheeks and stick-thin physique, he becomes Woodroof with alarming believability.

Jared Leto almost steals McConaughey's thunder with his performance as Rayon. He seems comfortable as the effeminate transvestite, and his body language and mannerisms are bang on. He is not the main character, but remains unforgettable in this role.

Jennifer Garner deserved some more screen time, because her character does not do much beyond being the support system within the system that Woodroof fights. Steve Zahn does his bit, but his character could have been etched out better.

The 1980s Dallas does not look too different from the present day Dallas, as far as production design is concerned, but it is the costumes that transport you to that era. Matthew McConaughey, specifically, carries the weight of the film on his shoulders not only with his acting, but also with the cars he drives, the outfit he wears and the accent he speaks in.

The background music is never too loud, and is appropriate. Some sequences are stacked one after the other, and transitions include written text that explain the passage of time in the character's life, but even then, the editing could have been less indulgent. A quicker pace would have made this a perfect movie.

With six nominations in the 86th Academy Awards this weekend, Dallas Buyers Club is fast becoming the one movie that you must watch, and you will not regret it. The language is a little strong, and the premise is a bit depressing, but it is a movie about the human spirit and the will to live, so that makes it a contemporary classic in this day and age of hopelessness and despair.
Share. Save. Connect.
Tweet
DALLAS BUYERS CLUB SNAPSHOT 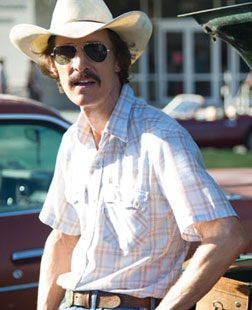 ADVERTISEMENT
This page was tagged for
Dallas Buyers Club english movie
Dallas Buyers Club reviews
release date
Matthew McConaughey, Jennifer Garner
theatres list
Follow @fullhyderabad
Follow fullhyd.com on
About Hyderabad
The Hyderabad Community
Improve fullhyd.com
More
Our Other Local Guides
Our other sites
© Copyright 1999-2009 LRR Technologies (Hyderabad), Pvt Ltd. All rights reserved. fullhyd, fullhyderabad, Welcome To The Neighbourhood are trademarks of LRR Technologies (Hyderabad) Pvt Ltd. The textual, graphic, audio and audiovisual material in this site is protected by copyright law. You may not copy, distribute, or use this material except as necessary for your personal, non-commercial use. Any trademarks are the properties of their respective owners. More on Hyderabad, India. Jobs in Hyderabad.