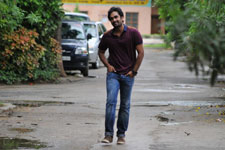 Kritika Deval / fullhyd.com
EDITOR RATING
4.5
Performances
Script
Music/Soundtrack
Visuals
5.5
6.5
6.0
5.5
Suggestions
Can watch again
No
Good for kids
No
Good for dates
No
Wait to rent it
Yes
The crusades, slavery, communism, the Nazis, and now, terrorism. It seems humanity must always have to fight a glorious battle against a blight of its own making. And while we've always had warriors set aside for this purpose, the war eventually spills over to the people, the common men and women going about the common business of living amidst the chaos, who are most certainly not equipped for the fight.

It is in scenarios such as these that one must look within oneself, and seek out the warrior spirit that normally lies redolent within each one of us, as Arjun (Gautham) of Basanti Degree College discovers, much to his chagrin.

You see, prior to this, his life was all about loafing about Hyderabad on whatever little money he can scrape from family and friends and their families. His father (Tanikella Bharani) is not worried because although Arjun flunks at least half the subjects each year, he also aces the subjects he really likes.

Thus goes Arjun's inert life, with the only occasional ripple being caused by Roshni (Alisha Baig) - the love of his life, the daughter of the city's police commissioner (Sayaji Shinde), and Muslim (gasp!). While we see the two lovers tentatively making their way towards a happy ending, there's another story going on, involving fanatical jihadists and Roshni's father, Ali Khan (if you didn't get that reference, you really need to be brushing up on your local GK).

Both these plotlines come to a crossroads just before interval, when an altercation between the police and the terrorists leads to the terrorists fleeing to Arjun's college on his farewell day and taking around 100 students hostage, including Roshni and two of Arjun's friends.

Now, with his damsel in real distress, does Arjun do the sensible thing and leave the girl's father to deal with the situation, or does he cross police barricades, brave firing from the terrorists, and rush to Roshni's rescue with absolutely no idea what to do afterwards?

Oh come on, you already know the answer. The movie is only half done, and the heroine is not yet in love with the hero. The rest of the film is rather confusing, and we found ourselves much too hypnotized by the fanatical light shining through the terrorists' eyes to concentrate on the movie anyway.

Basanti is a movie with good intentions, or so we hope. It is simply so full of Hindu-Muslim cliches that the intentions seem rather superficial. Despite the drawn-out first half, the locales and the supporting cast manage to achieve more character depth than our lead pair, who mostly seem interested in starting at each other and muttering inanities.

As far as the terrorists are concerned, they are so caricatured that we expected Vir Das or Russell Peters to jump into the scene and declare the whole thing to be an elaborate stand-up act.

Gautham wears one expression on his face, whether he is lovestruck or is in agony. And it's the same expression that a table or a chair might possess, leading us to believe that he is an android planted among humans for nefarious purposes. Alisha is pretty, in a quiet way, and shows promise.

The rest of the cast does much better, not only because they are talented, but also because of better characterisation. Of course, Tanikella Bharani can play a table or a chair with more panache than said pieces of furniture.

The real star, though, is Sayaji Shinde. Throughout the nonsense and the hysteria, this man, with his leonine face and bearing, makes it worth the stay.

The music is surprisingly good, with the background score becoming a seamless part of the screenplay. The camera work is adequate. The placement of the songs could have been less awkward.

All in all, as a film with a message, Basanti falls right on its face. As an afternoon's worth of adequate entertainment, it could work, but just maybe.
Share. Save. Connect.
Tweet
BASANTI SNAPSHOT 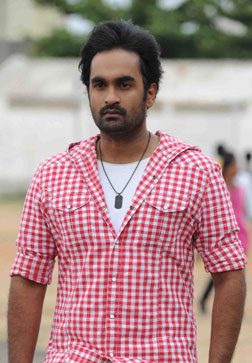 ADVERTISEMENT
This page was tagged for
Basanti telugu movie
Basanti reviews
release date
Gautham, Alisha Baig
theatres list
Follow @fullhyderabad
Follow fullhyd.com on
About Hyderabad
The Hyderabad Community
Improve fullhyd.com
More
Our Other Local Guides
Our other sites
© Copyright 1999-2009 LRR Technologies (Hyderabad), Pvt Ltd. All rights reserved. fullhyd, fullhyderabad, Welcome To The Neighbourhood are trademarks of LRR Technologies (Hyderabad) Pvt Ltd. The textual, graphic, audio and audiovisual material in this site is protected by copyright law. You may not copy, distribute, or use this material except as necessary for your personal, non-commercial use. Any trademarks are the properties of their respective owners. More on Hyderabad, India. Jobs in Hyderabad.