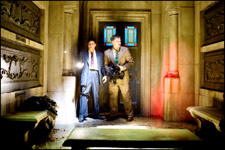 Samrat Sharma / fullhyd.com
EDITOR RATING
8.5
Performances
Script
Music/Soundtrack
Visuals
8.5
7.5
10.0
10.0
Suggestions
Can watch again
Yes
Good for kids
No
Good for dates
Yes
Wait to rent it
No
In the weeks leading to Shutter Island's release, I found myself strangely disenchanted with the prospect of watching it. This was, after all, Martin Scorsese, directing something written by someone else, and effectively making a horror film - something that the master purveyor of the human condition need not resort to, I thought. Goes to show how much I know.

Shutter Island is a magnificent piece of cinematic achievement. It's gorgeous, enthralling, moody and completely rewarding. Scorsese frees himself of the shackles of adding subtext to his plot, and instead takes this opportunity to create atmosphere, like only he can. Aided by Robert Richardson's stunning use of light and colour, as well as Robbie Robertson supervising a selection of modern classical music, Scorsese creates a taut mood, and keeps it intact as he takes us deeper into the mystery he has set up.

The primary motivation for him seems to be guilt and the violent spiral that deep guilt keeps us spinning into. Guilt isn't a straight line, he seems to imply - it is a self destructive cycle that keeps on adding on itself by making you act in ways that lead to further guilt. This notion of your conscience as a psychological, malevolent being is what makes the film fascinating.

The story begins in 1954 with two US Marshals Teddy (DiCaprio) and his rookie partner Chuck (Ruffalo) ferrying to Shutter Island, a remote and rocky island housing Ashcliffe Hospital, a facility for the criminally-insane (this is '54 after all - the sense of political correctness isn't the same). Run by an extremely odd and experimental Doctor Cawley (Kingsley), the place is truly eerie and Gothic.

The Marshals are on the island to investigate the disappearance of one inmate (patient and prisoner both, obviously) who is not to be found on this inescapable island. Soon, Teddy starts realizing that nothing adds up in the institution, and that the doctors and staff behave most nervously. To add to that, Teddy keeps seeing eerie things with memories of his wife who was killed by an arsonist, and his experience at the liberation of Dachau.

Needless to say, things keep getting madder than a hatter, and Teddy pokes around in areas of the island where he isn't meant to. The strange otherworldly colour scheme that Scorsese and Richardson employ for Teddy's psychological experiences coupled with the mainly Gothic-influenced classic pieces in the background make for an experience that is truly genius.

DiCaprio absolutely embraces the insanity of the film, and completely owns it. He employs a madness in his eyes which belie his smooth exterior. Without giving anything away, when the coda happens, he reaches the apex he was building throughout the film, and DiCaprio nails it. Mark Ruffalo is utterly believable and magnetic; I wish there was more of him.

The true genius is in the way Scorsese lets each of his character actors have these little moments that are skin-crawlingly evil. Ben Kingsley has a calm methodical menace about him, and Max von Sydow is completely unnerving in his unmasked malevolence.

So important are the bit parts of other people in building a convincing mood, that we have Emily Mortimer and Patrica Clarkson playing the same woman, to completely bone-chilling effect. The only weak part of the film is the script - which doesn't have much of a 'twist' and does poorly in trying to hide it. Scorsese manages to save that by not playing the reveal like a reveal, but instead using the coda as a slow release of the pressure that he builds up throughout.

Ultimately, I believe I couldn't have been more wrong about this film - it isn't a standard horror film or an easy Scorsese film. This is most decidedly the director at the top of his game, building worlds, deconstructing human psychology and creating intense mood, by employing the tools of his trade as only a master can. Each frame and detail smacks of his genius, and the experience is completely rewarding for anyone who likes movies.
Share. Save. Connect.
Tweet
SHUTTER ISLAND SNAPSHOT

ADVERTISEMENT
This page was tagged for
Shutter Island english movie
Shutter Island reviews
release date
Leonardo DiCaprio, Mark Ruffalo
theatres list
Follow @fullhyderabad
Follow fullhyd.com on
About Hyderabad
The Hyderabad Community
Improve fullhyd.com
More
Our Other Local Guides
Our other sites
© Copyright 1999-2009 LRR Technologies (Hyderabad), Pvt Ltd. All rights reserved. fullhyd, fullhyderabad, Welcome To The Neighbourhood are trademarks of LRR Technologies (Hyderabad) Pvt Ltd. The textual, graphic, audio and audiovisual material in this site is protected by copyright law. You may not copy, distribute, or use this material except as necessary for your personal, non-commercial use. Any trademarks are the properties of their respective owners. More on Hyderabad, India. Jobs in Hyderabad.