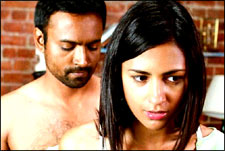 Deepa Garimella / fullhyd.com
EDITOR RATING
1.0
Performances
Script
Music/Soundtrack
Visuals
2.0
1.0
6.0
4.0
Suggestions
Can watch again
No
Good for kids
No
Good for dates
No
Wait for OTT
No
When the guy at the ticket counter of the multiplex warned us that this was going to be a "full adult movie", little did we know that he meant that this was for adults in a coma. Indeed, the USP of Mr. Singh Mrs. Mehta is not its smut. It is that it is such a tedious flick, watching it feels like watching slow motion footage of a crawling snail - in slow motion.

As the title suggests, the film is a take on infidelity. Mrs. Mehta (Lucy Hassan) and Mr. Singh (Naved Aslam) are cheating on their respective spouses, and don't display the slightest of guilt as they carry on with each other. Meanwhile, Neera Singh (Aruna Shields) and Ashwin Mehta (Prashant Narayanan), their better halves, find out soon enough.

Now Ashwin is a man who can only be described as a loser of sorts. He is a painter who hasn't made it big in life, and his jet-setting corporate wife Sakhi wears the pants at home. Plus, he doesn't want to confront her because he's too scared to listen to her admit that she did it. Neera is a neglected wife who doesn't have much of a life except for managing an agony aunt column on a website called www.behenji.com.

Ashwin and Neera find solace in each other, as buddies initially. Then, after 2 meetings, they sleep with each other. Next, he draws sketches of some of her body parts while she's asleep, and decides that he must paint her wholly in the nude.

Incredibly, Neera, who kept walking around topless in his art studio all this while, is now too shy to strip for him. But strip she does, and paint her he does. The camera "cleverly" blurs out everything, and overall, the love-making and naked-posing seems like a desperate effort to be artistically adult.

Eventually, their relationship becomes too complex to handle, and their marriages even get back on track (not because they've actively tried setting them right, but because Mrs. Sakhi Mehta and Mr. Singh are moving apart). The vague and bizarre ending, however, hints that everything isn't well - the key summary of the proceedings being that Sakhi is carrying Singh's child now.

The ridiculous dialogues and the screenplay demand that you don't take this flick seriously. Neera and Ashwin seem to take ages to put two and two together for every incident of cheating by their spouses, and they never confront them anyway.

And if you do take this movie seriously, there's just too much pain to endure, because the protagonists are in such pathetic, distressing situations. The pace of the movie is unbelievably slow as well, and bloats the morbidly lonely feeling that the story develops in you.

Aruna Shield's acting is embarrassingly atrocious, and isn't helped too much by Prashant Narayanan. With Lucy Hassan treating her miniscule role as nothing short of a joke, Naved Aslam remains the only person in the cast with some credibility as an actor.

Melancholy Hindustani classical music forms the film's background track, and melodious though it is, adds to the moodiness. The visuals are pretty boring, given that this has been shot on NRI turf.

This is no art, this is no "adult" stuff, this is no entertainment, and this isn't even in between anything. Skip it at all costs.
Share. Save. Connect.
Tweet
MR. SINGH MRS. MEHTA SNAPSHOT

ADVERTISEMENT
This page was tagged for
Mr. Singh Mrs. Mehta english movie
Mr. Singh Mrs. Mehta reviews
release date
Prashant Narayanan, Aruna Shields
theatres list
Follow @fullhyderabad
Follow fullhyd.com on
About Hyderabad
The Hyderabad Community
Improve fullhyd.com
More
Our Other Local Guides
Our other sites
© Copyright 1999-2009 LRR Technologies (Hyderabad), Pvt Ltd. All rights reserved. fullhyd, fullhyderabad, Welcome To The Neighbourhood are trademarks of LRR Technologies (Hyderabad) Pvt Ltd. The textual, graphic, audio and audiovisual material in this site is protected by copyright law. You may not copy, distribute, or use this material except as necessary for your personal, non-commercial use. Any trademarks are the properties of their respective owners. More on Hyderabad, India. Jobs in Hyderabad.