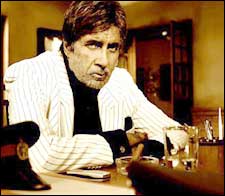 Some things have changed. Amitabh now enters in a Mercedes. Smokes Cuba’s finest. Dresses in pinstripes. But the voice is still the same. And, thank God, his acting is still like it was.

Viren Sahai (Amitabh) is a leading mafioso with a wayward son Abir (Sushant Singh), an upset wife, a daughter, a daughter-in-law and a grandson. The young Abir’s temper and wayward eye land him in the soup, the tureen being stirred by a mafia rival (Kader Khan). Pop hauls the young one’s irons out of the fire and sets out to even things up.

Meanwhile, Shekhar Bhatia (Akshay Kumar) is busy romancing Kavita (Bhumika) and trading jokes with his parents while taking care of his catering business and his ne’er-do-well younger brother Aryan (Aryeman). The fight between the dons results in collateral damage for Shekhar and his family.

That takes care of the first hour or so, including 4 or 5 songs which seem to have been made for the remix channels – loud beats, rap-influenced lyrics, and nubile young women in skimpy clothes.

The rest of the movie – another hour and a half – covers the impact of the collateral damage, and the efforts by various parties to extract revenge and enact scenes dripping with gore.

Intended as a launch-vehicle for Aryeman, this movie is dominated by the Big B and Akshay. The latter is excellent, easily the best part of the first hour of the movie. Bhumika is wasted, but does her part competently, what little there is of it. This lady is capable of better things. Sushant Singh does a poor job of what could have been an excellent role. Aryeman? The poor, hapless kid. Most actors would find it hard to take on the Big B face to face, and this tyro is no match at all.

Amitabh, of course, is the movie. He needs sunglasses and other costume-props about as much as Brahmanandam needs a laugh track. His baritone can still twist your innards. And he still fires a mean bullet.

He seems to give some of the scenes less attention than they deserve – notably the one where he verbally jousts with his wife in the kitchen - but this is still enough to pale all others into insignificance. And when he rolls out his full range, the screen crackles and sizzles. The scene where he faces betrayal and the scene where he reacts to Aryan when being arrested are themselves worth the price of entry.

The screenplay lacks originality, relying unnecessarily on age-old gags and props like the overweight crony and hammed up death scenes. Some scenes drag. The double entendres are needless, and caricatures in the name of humor are more than a little tacky. And the music is jarring.

But the action is gripping. Every predictable twist and every prosaic turn is worth watching. This is vintage Bachchan.

Worth watching for anyone over 21. And for Amitabh fans, this is a must-see. Great stuff by the original Don.
Share. Save. Connect.
Tweet
FAMILY SNAPSHOT

ADVERTISEMENT
This page was tagged for
Family hindi movie
Family reviews
release date
Amitabh Bachchan, Akshay Kumar
theatres list
Follow @fullhyderabad
Follow fullhyd.com on
About Hyderabad
The Hyderabad Community
Improve fullhyd.com
More
Our Other Local Guides
Our other sites
© Copyright 1999-2009 LRR Technologies (Hyderabad), Pvt Ltd. All rights reserved. fullhyd, fullhyderabad, Welcome To The Neighbourhood are trademarks of LRR Technologies (Hyderabad) Pvt Ltd. The textual, graphic, audio and audiovisual material in this site is protected by copyright law. You may not copy, distribute, or use this material except as necessary for your personal, non-commercial use. Any trademarks are the properties of their respective owners. More on Hyderabad, India. Jobs in Hyderabad.