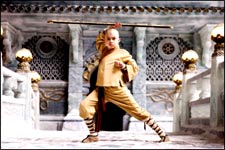 Samrat Sharma / fullhyd.com
EDITOR RATING
3.5
Performances
Script
Music/Soundtrack
Visuals
1.5
1.5
3.0
8.0
Suggestions
Can watch again
No
Good for kids
Yes
Good for dates
Yes
Wait for OTT
Yes
If there is a lesson in how to waste an ace cinematographer like Andrew Lesnie, it's The Last Airbender. Back to his home-ground of high fantasy and heavy CGI, the DP tries, but M Night Shyamalan's stinted and godawful direction completely craps on it.

And that isn't even the first problem with The Last Airbender. I think the biggest problem is the 3D. The post conversion process has left the film looking dark, murky, and still lack in 3D. I'm all for subtlety and nuance in your technology, but even the most obviously 3D moments here come off as flat. This isn't just a death knell on the post-conversion process of making 3D films - it is personally a bad deal to pay more for an enhanced experience which is worse that the original.

That out of the way, this isn't that bad a film. It isn't the worst film Shyamalan has made or the most boring, though it comes close. Don't get me wrong - it is a very, very bad film; just in a generic bad film kind of way, and not the worst-movie-ever kind of bad that Twitter will have you believe.

Part of the reason for that is the way Shyamalan makes his films - he is ultra-serious about everything. Here, he sucks the life out of a delightful children cartoon show, but that also means you can't laugh at the film. You just shrug, say it's terrible, and move on with your life. It's that listless and inconsequential.

The story hasn't been changed that much: this is a world where certain people have the ability to "bend" or control the elements (earth, water, air, fire), and an "Avatar" is born every century or so who can bend all elements. When the last Avatar was lost, the fire kingdom took advantage and waged war with the rest of the kingdoms. Aang, the latest airbender Avatar, is found, but he is just a small child who cannot yet master the other elements.

So begins the race to save the kingdom while trying to master the other elements, while unleashing a cavalcade of poor acting for us to cringe at. All the child actors - Noah Ringer as Aang, Nicola Peltz as Katar and Jackson Rathbone as Sokka are completely horrible. Simple lines are too much of an ask for these young children, and when Shyamalan tasks them with mouthing his now-trademark heavy-handed exposition, they fail utterly and completely, and fail again just for good measure.

Dev Patel is fun in a bad pulp movie kind of way. He chews scenery like a starving cow, and gets a few laughs, if not with, then at himself. Aasif Mandvi from the Daily Show shows he is incapable of doing anything else other than be on The Daily Show. He delivers his lines as if he is doing broad comedy - and he is meant to be the bad guy.

With the poor writing and bad casting taking care of all character moments, Shyamalan gets to spoiling the film's best thing - DP Andrew Lesnie - with horrible editing and incoherent shots that are pretty but don't mean anything in context.

To his credit, Shyamalan absolutely crams his film with things to look at. There is always an action piece, or a good-looking shot for every long dialog delivery explaining things, which kind of gives a forward momentum that I was thankful for. It doesn't slow down, and the pacing works in its favour.

Ultimately, this is a poorly-made, standard-issue bad Shyamalan film, and while it keeps behaving like it is too serious for its roots, the amateurish acting and the poor 3D show us how low-rent this really is. If your child is a fan of the show, buy him a DVD of the first season instead.
Share. Save. Connect.
Tweet
THE LAST AIRBENDER -... SNAPSHOT
THE LAST AIRBENDER - 3D SNAPSHOT

ADVERTISEMENT
This page was tagged for
The Last Airbender - 3D english movie
The Last Airbender - 3D reviews
release date
Noah Ringer, Dev Patel
theatres list
Follow @fullhyderabad
Follow fullhyd.com on
About Hyderabad
The Hyderabad Community
Improve fullhyd.com
More
Our Other Local Guides
Our other sites
© Copyright 1999-2009 LRR Technologies (Hyderabad), Pvt Ltd. All rights reserved. fullhyd, fullhyderabad, Welcome To The Neighbourhood are trademarks of LRR Technologies (Hyderabad) Pvt Ltd. The textual, graphic, audio and audiovisual material in this site is protected by copyright law. You may not copy, distribute, or use this material except as necessary for your personal, non-commercial use. Any trademarks are the properties of their respective owners. More on Hyderabad, India. Jobs in Hyderabad.