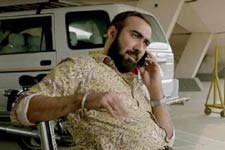 Nupur Barua / fullhyd.com
EDITOR RATING
6.0
Performances
Script
Music/Soundtrack
Visuals
6.0
4.0
5.0
5.0
Suggestions
Can watch again
No
Good for kids
No
Good for dates
Yes
Wait to rent it
Yes
According to an unnamed celebrity, "Every survival kit should include a sense of humour." Director Shashant A Shah takes this adage a little too seriously, in his effort to stay afloat in the Indian film industry (it is a tough place), and has so far given us his version of "funny" with Dasvidaniya and Chalo Dilli, both not really appreciated. He repeats his survival tactic by presenting us with yet another comedy - this time a revenge-heist comic caper that has a promising premise but somehow leaves you deflated.

New Delhi is the choice of setting in Bajatey Raho, and we are led to believe that the most bizarre characters come from the country's capital. There is Sabbarwahl (Ravi Kissen), who just loves to play with people's lives. He is a lip-pursing goon who loves fraud.

Since somebody has to pay for his crimes against society, Sabbarwahl makes bank employee, Baweja (Yogendra Tikku), and his associate take the fall. Unable to admit the shame, Baweja commits suicide.

Mrs. Baweja (Dolly Ahluwalia), a.k.a. Mummyji, is livid, because she knows she has been wronged. She enlists the help of her son, Sukhi (Tusshar Kapoor), and her other well wishers, Mintoo (Vinay Pathak) and Ballu (Ranvir Shorey), to formulate a plan that will avenge her husband's death.

On a concept level, on paper, this sounds like a great idea. The problem then lies with the execution of a script that will translate into a feature film. The director spends a fair amount of time setting up the characters and the situation they are all in, by interspersing funny dialogues without context.

At some point, you realise that Ballu is the angry young man with the maximum abuses, Mintoo is the voice of reason, and Sukhi is a lost soul who would rather tend to his cable business than exhibit this show of solidarity with his mother and friends. Which is why he breaks into a completely irrelevant-to-the-plot romance with Manpreet (Vishakha Singh), ably complemented by some jarring music.

The script returns to the idea of the heist after much meandering, and the characters then begin the execution. Since the plot is pretty much predictable - the victims make sure the wrongdoer is taught a suitable lesson - the makers try to come up with creative ways to make it a cohesive narrative, with enough incidents to retain the interest of the audience. Unfortunately, however, the jokes get repetitive, and the depicted scenes seem convoluted and torturous.

Add to that the fact that it is actually a Punjabi movie (under the guise of a Hindi film) and you can rest assured that you will come away baffled with what you just saw (unless you understand the language, of course, then you may as well laugh heartily and sneak condescending looks at your co-audience who have not yet picked up the nuances of the unofficial lingua franca of Bollywood). Fortunately, the gags do not become OTT, thus escaping the "slapstick" tag.

Tusshar Kapoor cannot beat his Golmaal act, ever, no matter what role he picks to show off his acting skills. To give him the benefit of the doubt, he is not comfortable with the Punjabi accent, although he tries really hard. You really feel for his character, at some level, because he just does not belong to the setting.

Vinay Pathak and Ranvir Shorey are a superior act, and they have a crackling chemistry, playing off each other with impeccable comic timing, but the latter becomes a little too aggressive after a while, and therefore becomes plain annoying.

While the other actors make for an able supporting cast, the real stars of the movie are Dolly Ahluwalia and Ravi Kissen. The former is in her element, but she will hopefully not be typecast in similar roles (that of a Punjabi matron). She fills the screen with her talent and her body language. You cannot take your eyes off her.

Ravi Kissen is a surprise here, losing his self-indulgence and jumping headlong into a role that showcases his ability to not only act, but also to seem talented enough to let the character take over his larger-than-life off-screen personality. The man is funny, and he can give the Ranvir-Vinay duo a run for their money with his sense of comedy.

Since it is Delhi, it is a given that the production design, the costumes and the music will be loud. In fact, there is never a peaceful moment in the movie, as far as background music is concerned (the director never lets you forget the fact that it is a comedy). The "Mata Ki Chowki" song, set to the tune of a popular Bollywood number, is fun, and the sudden item song, "Nagin Nagin", is actually quite catchy.

The editing is crisp, and the run time does not exceed two hours, which is a relief. The cinematography is average, and does not hurt your eye.

With so many releases this weekend, Bajatey Raho may have to struggle to attract audiences, but we suggest you catch it once, if only to appreciate the fact that the protagonist of the movie is a senior citizen who can make the younger actors look shallow and useless. Just leave your super-picky personality at home, and you may just have some fun.
Share. Save. Connect.
Tweet
BAJATEY RAHO SNAPSHOT 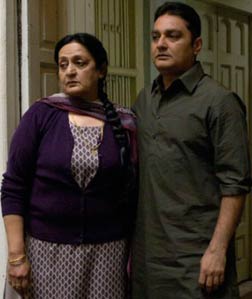 ADVERTISEMENT
This page was tagged for
Bajatey Raho hindi movie
Bajatey Raho reviews
release date
Tusshar Kapoor, Dolly Ahluwalia
theatres list
Follow @fullhyderabad
Follow fullhyd.com on
About Hyderabad
The Hyderabad Community
Improve fullhyd.com
More
Our Other Local Guides
Our other sites
© Copyright 1999-2009 LRR Technologies (Hyderabad), Pvt Ltd. All rights reserved. fullhyd, fullhyderabad, Welcome To The Neighbourhood are trademarks of LRR Technologies (Hyderabad) Pvt Ltd. The textual, graphic, audio and audiovisual material in this site is protected by copyright law. You may not copy, distribute, or use this material except as necessary for your personal, non-commercial use. Any trademarks are the properties of their respective owners. More on Hyderabad, India. Jobs in Hyderabad.