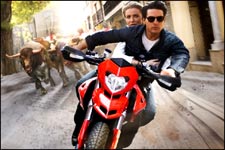 Samrat Sharma / fullhyd.com
EDITOR RATING
6.0
Performances
Script
Music/Soundtrack
Visuals
8.5
5.5
7.0
7.0
Suggestions
Can watch again
Yes
Good for kids
No
Good for dates
Yes
Wait to rent it
Yes
Knight and Day is an old-fashioned American action film. The action takes place in actual exotic locations (instead of in front of a greenscreen), the leads bring on a certain level of charm, and the director is not afraid to create a physical action landscape with stunts and people.

As much as James Mangold can direct action (as 3:10 To Yuma showed us), this film is mostly about Cruise trying to reassert his position as the quintessential action superstar. All nice smiles and patience, this is Superman as a spy. For the most part it works, too - the major sell of Cruise teaming up with a bumbling lost woman to bring down rogue CIA agents in a mission that spans continents is completely and effortlessly pulled off by a winning performance by Cruise.

His public personality helps sell the nice-guy-but-slightly-mad vibe he carries with him in the film. It's fun watching a summer action film go to this extent to lay on the charm offensive and then sell it with good action. For a while you're in the Zone, and everything is okay.

I think the deal-breaker might be Cameron Diaz. I can't put my finger on it - something about the film, especially after the first half hour or so is done, feels odd and unsatisfying. Between the fake motorcycle shots that are yet to come, and the very irritating shrieks Diaz is putting up, lies the period when the film starts making less and less sense for you, personally. It could be Diaz; while effort has been made to give her an interesting career (she fixes classic cars), she doesn't seem to be that interesting a character.

If it was real life, of course, a woman in constant danger like that would panic exactly as she does, but the flick does a bad job of masking the fantasy. And once the bubble is broken, the whole plot about a super battery, created by Paul Dano (with extremely dodgy facial hair), being sold to the highest bidder by a smarmy Peter Sarsgaard starts making even less sense.

James Mangold has made a film that coasts along on charm and decent fantasy action for a long time, but even he must know that after the first hour and a bit, the film sags down a lot and drags it feet to get to the ending? It is a plodding, boring trudge through some wasted beats and a lot of wasted potential to get to the end, and ultimately that's the memory you take out of the cinema with you.

I probably would have dismissed the film entirely, but I have to admit, if there is something that makes sense here, it's Cruise. He is the super star here, completely effortless and at ease. He steals the show with his presence and his charisma, and, as stars do, looks good doing stunts. This isn't a Bourne film - this is a weird crossover between a very old Bond film, and the manic pace of Cruise's own MI series, and he sells it really really well.

Ultimately, it's a well-structured old-fashioned action film, if a bit unwieldy towards the last half hour, and is a fun time at the movies. There are better action films this summer, but this certainly will hit the spot.
Share. Save. Connect.
Tweet
KNIGHT AND DAY SNAPSHOT

ADVERTISEMENT
This page was tagged for
Knight And Day english movie
Knight And Day reviews
release date
Tom Cruise, Cameron Diaz
theatres list
Follow @fullhyderabad
Follow fullhyd.com on
About Hyderabad
The Hyderabad Community
Improve fullhyd.com
More
Our Other Local Guides
Our other sites
© Copyright 1999-2009 LRR Technologies (Hyderabad), Pvt Ltd. All rights reserved. fullhyd, fullhyderabad, Welcome To The Neighbourhood are trademarks of LRR Technologies (Hyderabad) Pvt Ltd. The textual, graphic, audio and audiovisual material in this site is protected by copyright law. You may not copy, distribute, or use this material except as necessary for your personal, non-commercial use. Any trademarks are the properties of their respective owners. More on Hyderabad, India. Jobs in Hyderabad.