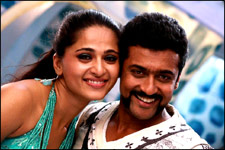 Deepa Garimella / fullhyd.com
EDITOR RATING
4.5
Performances
Script
Music/Soundtrack
Visuals
7.0
4.0
6.0
6.0
Suggestions
Can watch again
No
Good for kids
No
Good for dates
No
Wait to rent it
Yes
At the very least, Yamudu is pretty unpretentious about what it is trying to be, namely, an out-and-out commercial piece incorporated with as many cliches as is legally possible without being accused of strangulating the audience. The film is almost raving mad in its mindlessness, and if not for the sheer charisma of Suriya, it would have been pretty hard to sit through.

Suriya plays Narsimham, an upright, strong, handsome, articulate, skilled, intelligent, dedicated, tough, responsible and caring police officer in Razole. Yes, we got all that from the 50,000 scenes and dialogues showcasing his prowess in the beginning.

Narsimham has a run-in with a Vizag real estate don Purushottam (Prakash Raj), who keeps bumping off people, grabbing their lands, and extorting money from them. Pretty soon, Purushottam gets Narsimham transferred to Vizag, and starts playing goon games with him.

The film evidently has its reasons to have been a hit in Tamil - it is fast-paced and has plenty of action, and has a good star cast. Unfortunately, there's no novelty that a Telugu audience will be treated to in Yamudu, especially when you consider the fact that successful Telugu films almost always have the backing of skillful dialogue writers, a factor lost out thanks to the the dubbing job in this one.

While the action is decently-timed, the absolute loudness of the proceedings, and the brutal and rash violence is likely to be a huge put off since that is all the film offers as its USP. The impossible stunts and insane roaring would have gone down well with the audience if they were punctuated by something meaningful, which they are not.

For Suriya, this is a role that requires him to do nothing at all. Like we said, he's one of the key reasons you'd probably venture to watch this flick. Anushka plays Surya's love interest, and she manages to curve up her uni-dimensional role pretty well.

Then, there are Prakash Raj and Nasseer, the only other familiar faces around, save for the hero's sidekick, who's played by the Tamil comedian Vivek. Prakash Raj feels like a caricature of a caricature - he may as well have sleepwalked through this role. The rest of the cast is mostly all in the villain's camp, and is an alien bunch.

Devi Sri Prasad's compositions have no steam to start with, but the songs are mildly enjoyable thanks to all the fanfare that goes with them. The cinematography has an overly fast-paced quality to it, and the cuts and chases seem like they were carried too far. Lacklustre visual quality on the whole mars the movie-watching experience, though.

You could watch it if your doctor absolutely recommends it, but even if he did, we think you'd better tell him Tollywood has much better films showing in town right now.
Share. Save. Connect.
Tweet
YAMUDU SNAPSHOT

See Yamudu full details
YAMUDU USER REVIEWS
1 - 3 OF 3 COMMENTS
POSITIVE  |  NEGATIVE |  NEWEST  |  OLDEST  |  MOST HELPFUL  |  LEAST HELPFUL
Venkatesh on 6th Jul 2013, 1:33am | Permalink
Biased review. I am sure that whoever wrote this review is better to watch the doctor for being so one sided. Its really a mass movie...you can watch it atleast once for sure. Go by genuine reviews about any movie, not like this cheap website. Its not a great movie at the same time its not a bad movie too. Go and watch then bang on this stupid reviewer.
sree on 8th Jul 2010, 7:13pm | Permalink
average movie goes on like a journey with out jerks.routine story but casting is good.music is up to the mark.

krish on 3rd Jul 2010, 7:26pm | Permalink
good for masses. enjoyable for watching once. It can become an average decent grosser at our box office too. surya is good, so was anushka

ADVERTISEMENT
This page was tagged for
Yamudu telugu movie
Yamudu reviews
release date
Suriya, Anushka
theatres list
Follow @fullhyderabad
Follow fullhyd.com on
About Hyderabad
The Hyderabad Community
Improve fullhyd.com
More
Our Other Local Guides
Our other sites
© Copyright 1999-2009 LRR Technologies (Hyderabad), Pvt Ltd. All rights reserved. fullhyd, fullhyderabad, Welcome To The Neighbourhood are trademarks of LRR Technologies (Hyderabad) Pvt Ltd. The textual, graphic, audio and audiovisual material in this site is protected by copyright law. You may not copy, distribute, or use this material except as necessary for your personal, non-commercial use. Any trademarks are the properties of their respective owners. More on Hyderabad, India. Jobs in Hyderabad.