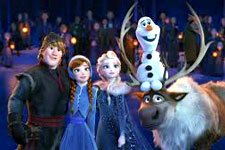 Punarvasu Pendse / fullhyd.com
EDITOR RATING
7.0
Performances
Script
Music/Soundtrack
Visuals
7.0
6.0
8.0
8.0
Suggestions
Can watch again
Yes
Good for kids
Yes
Good for dates
Yes
Wait for OTT
No
Disney released Frozen, a tale based on Hans Christian Andersen's fairy tale The Snow Queen, in 2013. It became the best-selling animated film of all time (before ultimately being surpassed by The Lion King in 2019), and became a cult favourite, winning multiple Academy Awards and earning over a billion in direct sales (it is also one of the most widely watched films on home television) and huge additional mammon through a line of toys and collectibles that also sold like hot cakes. In other words, Frozen 2 is only going to have one competitor - itself.

Frozen 2 requires you to know at least a little bit about its blockbuster prequel. Elsa (Idina Menzel) is the now the queen of Arendelle, adored by her family and the townsfolk alike. Anna (Kristen Bell), her boyfriend Kristoff (Jonathan Groff), Kristoff's reindeer Sven, and the lovable snowman Olaf (Josh Gad) complete Elsa's world - until a haunting melody from an enchanted forest, the very forest that was the stage of all the childhood tales the sisters had been told by their father, has her longing for adventure again.

Elsa's decision to seek the voice that beckoned her was hastened by the peril that had befallen Arendelle, and the little family sets out on an adventure that will change their entire world. Once again, Disney invites us on a journey that will make you laugh, get you excited, and fill you with sadness - proving yet again that its animated features have something for people of all ages, and that you need only to let it go.

Frozen 2 is darker than its predecessor, with themes of loneliness and despair more apparent this time. The carefully chosen colour palette resembles the fall, with auburn and gold replacing the more vibrant colours we saw in the previous movie. Along with sisterhood and fierce love for family, it appears that Frozen 2 wants to teach the younger generation about overcoming adversity, even when there is little going your way.

Anna, especially, personifies this belief - there is one scene where she talks about succumbing to her loneliness (real dark for a kids' movie), but she realizes that when nothing is certain, the only thing one can do is to take the next right step. This is not a new concept for Disney - we have previously seen Bambi losing her mother and coping with that loss - but this one gets to you in a different way. While losing a loved one is the common theme, Anna's melancholic song feels gut-wrenching in a much more psychological manner.

But do not be alarmed by this - Frozen 2 is a PG-rated, feel-good movie at heart. Catchy songs, beautiful visuals, and lots of cute/silly jokes (mostly thanks to the wonderfully naive Olaf) go a long way in helping the movie endear itself to its younger audiences. A lot of the darker moments in the film are subtextual, making it well nigh impossible for kids to decipher, and they're more likely to enjoy the cute characters such as the playful air spirit that is experienced and not seen, the fire lizard (very reminiscent of a certain Pokemon whose tail sports a flame), and the truly ethereal water horse. It is also a great example of how women can venture out on their own without needing a knight in shining armour to rescue them - a lesson that is ironically missing from a lot of movies geared towards adults.

The story is more complicated this time, with multiple sub-plots running simultaneous to Elsa's quest. The side characters are well-written, if a little lacking in screen time, and the niggling doubts of implausibility are easily masked by the movie's magic - both literally and figuratively. The story flows along, with mild twists and turns on the way, and the movie doesn't feel stretched. On the contrary, we would have loved to see more of the Northuldra folk like Honeymaren.

Frozen 2's score is again by Christophe Beck, and the songs are again written by the husband-wife duo Robert Lopez and Kristen Anderson-Lopez - so the songs from Frozen that were stuck in your head may finally get replaced.

Frozen 2 is perhaps not going to be as much of a phenomenon as the first film. That doesn't take away from its own merit as a movie, though, and we even think this one would appeal to the adults a little more - there is a recurring theme in the movie about understanding things after growing up, whose surprisingly well-written conclusion had us feeling wistful as we walked out. 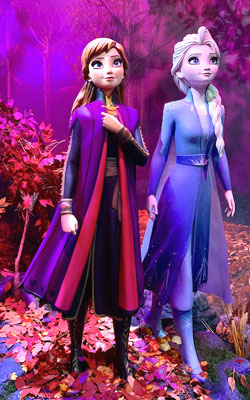 ADVERTISEMENT
This page was tagged for
frozen movie in telugu
frozen 2 full movie in telugu 2020
frozen 2 telugu dubbing movie download
Frozen 2 Telugu full movies come
frozen 2 telugu full movie download
Follow @fullhyderabad
Follow fullhyd.com on
About Hyderabad
The Hyderabad Community
Improve fullhyd.com
More
Our Other Local Guides
Our other sites
© Copyright 1999-2009 LRR Technologies (Hyderabad), Pvt Ltd. All rights reserved. fullhyd, fullhyderabad, Welcome To The Neighbourhood are trademarks of LRR Technologies (Hyderabad) Pvt Ltd. The textual, graphic, audio and audiovisual material in this site is protected by copyright law. You may not copy, distribute, or use this material except as necessary for your personal, non-commercial use. Any trademarks are the properties of their respective owners. More on Hyderabad, India. Jobs in Hyderabad.