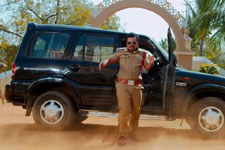 Ravi Kandala / fullhyd.com
EDITOR RATING
4.0
Performances
Script
Music/Soundtrack
Visuals
4.0
4.0
4.0
4.0
Suggestions
Can watch again
No
Good for kids
No
Good for dates
No
Wait for OTT
No
Singham 123 is probably the best step taken by the Manchu family scions in their film careers. Both Vishnu and Manoj keep acting in one unmemorable film after another - mostly produced under their own banner - and these films have hardly taken their careers forward. For Vishnu to then step up and produce a movie starring Burning Star Sampoornesh Babu is a good move - producing a spoof is so much better than acting in spoofworthy movies.

Sadly, though, Vishnu seems to have decided that he has a talent for story and screenplay writing, and credits himself for both of these in Singham 123. He's clearly misled here, for those talents are not really there - it would in fact be safe to say his acting skills are way better than his writing skills.

Singham 123, as is obvious from the title and the leading man, is a spoof. The film parodies every Telugu movie released in the last couple of years. It does a great job some of the time, and a less than average job the rest.

Plot-wise, the film is about Singham 123 (Sampoornesh Babu), an honest police officer. Singham is deputed to the town of Singarayakonda to end the menace of a villain called Lingam (Bhavani Chowdary). Just before he leaves, he is told by his mother that Bhavani is responsible for his dad's death. Singham swears that he will avenge his father, and sets out. How he sets things right in Singarayakonda forms the rest of the plot.

Singham 123 showed so much promise in the trailer that we expected a real rib-tickler. However, the completely disjointed plot makes it impossible to connect to the film. The really hilarious one-liners are also few and far between. The director's insistence on reminding you in every scene (using speech bubbles or visual effects or subtitles) that this is a spoof gets tiring.

Sampoornesh Babu kills it with his typical dialogue delivery and his spoofs of all top actors. His dancing skills are best left alone, but we are seriously glad there's one guy doing awesome take-offs in Telugu cinema. The rest of the cast though is totally over-the-top, with the villain being particularly terrible.

The technical values clearly show that the movie was wrapped up in quick time and within a limited budget, which is actually perhaps a good thing. And the film's censor certificate shows a runtime of 115 minutes but it ends in around 95, which is another thing to be happy about.

The problem with Singham 123 is that it gave away all the good parts in the trailer. If you've watched the trailer, skip the movie. And if you haven't, then watch the trailer and skip the movie.
Share. Save. Connect.
Tweet
SINGHAM 123 SNAPSHOT 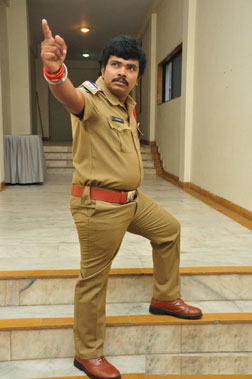 ADVERTISEMENT
This page was tagged for
singham 123 english subtitles
Singham 123 telugu movie
Singham 123 reviews
release date
Sampoornesh Babu, Bhavani
Follow @fullhyderabad
Follow fullhyd.com on
About Hyderabad
The Hyderabad Community
Improve fullhyd.com
More
Our Other Local Guides
Our other sites
© Copyright 1999-2009 LRR Technologies (Hyderabad), Pvt Ltd. All rights reserved. fullhyd, fullhyderabad, Welcome To The Neighbourhood are trademarks of LRR Technologies (Hyderabad) Pvt Ltd. The textual, graphic, audio and audiovisual material in this site is protected by copyright law. You may not copy, distribute, or use this material except as necessary for your personal, non-commercial use. Any trademarks are the properties of their respective owners. More on Hyderabad, India. Jobs in Hyderabad.